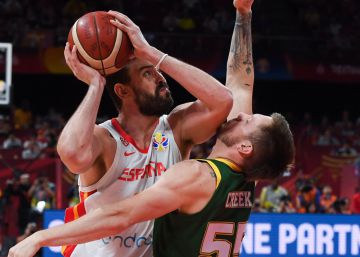 The proud and agonizing adventure of Spain in China is, at least, silver. The set of Scariolo tamed the Australian beast and will play the World Cup final for the second time in its history after overcoming everything and more in a brave and touching duel. Spain was returning to the track where he signed the best defeat of his encyclopedia. That glorious silver in the 2008 Games in which the team presented a colossal replica to the Dream Team of Kobe Bryant, Carmelo Anthony, LeBron James, Dwight Howard … The day on which the Moon was closest, a few steps away. And, on that same parquet, he defended the selection as a fierce competitive soul.

With 69-70 on the scoreboard, the Llull and Dellavedova triples crashed in the hoop. Spain kept the ball 28 seconds ahead. Bogut needed Marc who, in the absence of 8s, scored both free throws. Claver later stopped Mills, who also went to the personnel line. He scored the point of the tie and failed the second pitch. Ricky's triple on the horn was not that of glory and the drama expanded five more minutes (71-71). In extra time, Mills and Marc were challenged in a majestic, monumental duel. And his exchange of blows was once again balanced in a match that began to break through in the encyclopedia of the World Cup. At the second extension, Spain and Australia came tied at 80, and Marc and Mills at 29 points per beard. The ocean weighed the fear of winning and the selection was unleashed its winning memory. The wall returned and the rock crashed there. Two Llull triples placed those of Scariolo one step away from conquering the world.

Ricky was the momentum again fantasist of a Spain prepared for agony. A steep duel was expected between the Australian rocks and the staging responded to the level of contact and revolutions of the tortuous trances. They faced the ascent of Scariolo guided by the compass of the genius of Masnou and Juancho points as the first arguments in attack. The shackles for Mills and Dellavedova were already distributed, seeking to short-circuit the operations center aussie. He scored two bright triple the base of the Cavaliers slipping through a slit but, in return, Mills noticed the Spanish breath, was minimized exit and started with a thick statistic (2 of 6 in field shots).

Spain took the first advantages of the semifinal and closed the first quarter with a triple of the Llull factory that made the point of optimism. But, with the change of room, the resistance faltered and the attack clouded. They began to hit Landale and Bogut and Mills escaped all radars. The result was a disturbing partial 2-11 in just five minutes with which Australia was strengthening (24-32, m. 15). Scariolo's game plan demanded to match the energy and dynamism of the rival, contain his game in the open field and multiply in defense against a team with solutions in each parquet board, with shot and penetration, with muscle and fiber. And the blanket began to fall short to cover a growing beast.

Scariolo quickly turned to his security quintet (Ricky, Llull, Rudy, Claver and Marc) to escape the quagmire based on experience. With the most classic on the track and several zonal defenses, Spain weathered the storm (30-34). But, again, the aim remained off the run and Australia went to rest ahead in the game, the score and the sensations (32-37, m. 20). By then, the selection was worth 7 of 17 in two shots and 4 of 17 in triples. His rival improved all shooting percentages, dominated the rebound and circulated the ball better. Plus, was missing Marc (4 points from the free throw, three rebounds and two rebounds in the first 20 minutes).

The NBA champion appeared in the restart with five consecutive points that eased accounting more than the sensations of the national team. At that point, I played what Australia wanted and Spain was a want and I can not. While the lucidity appeared, Scariolo's men grabbed the defense as a non-negotiable argument. But, each crashed ball in the rival ring enlarged the injury on the scoreboard. With Mills producing at his usual pace among Spanish doubts, the ocean set launched a blunt demarrage (39-50, m. 25).

The punishment of kerosene deposits after a thousand hours of flight left the most expert pieces resentful and opened the way to vigorous resources. And Scariolo pulled the Hernangómez brothers as a weapon of mass agitation. With Ricky, Llull and Pau Ribas tightening the rope and the Willy-Juancho couple sticking against the world, Spain embraced the ‘if you can’ and discounted points like who gets wisdom teeth. Clenching his teeth more than ever, Scariolo's teeth hardened his jaw and they found Ricky's smile again in attack. With pulse and tact, with tiento and gallons, the Suns base left accounting in comprehensive terms before entering the finish line (51-55, m. 30).

Spain was presented at the event with the feeling of duty fulfilled after having guaranteed the direct ticket to the Tokyo Games in a hostile championship, but with the sharp ambition to compete for a more open than expected World Cup. The feeling of unique opportunity had been repeated as a mantra on the eve to define a clear horizon of American, Serbian and Greek coconuts. And the selection threw itself through the dream to an open grave. With 53-61 on the scoreboard came seven consecutive points from Marc, a triple from Pau Ribas and a basket from Llull that taught Australia the Spanish pride (65-67, m. 37). Marc then escaped the ball in a couple of actions. But in addition to making the ball elusive, sweat served Scariolo's to show his touching grip. A World pride that after surviving everything and two extensions is, at least, silver.

More than 1,200 Espanyol fans will travel to Wolverhampton