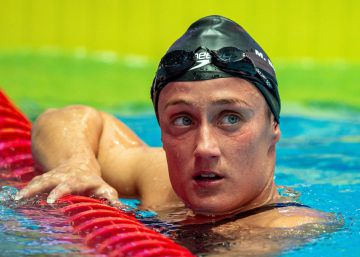 The 400 meters of combined styles, the test that measures the finest, most technical and most complete swimmers in the world, ran at a relatively slow pace and had an unexpected outcome when behind the Japanese Daya Seto (4m 8.95s), the American Jay Litherland (4m 9,22s) and the New Zealander Lewis Caleburt (4m 12,07s) the Spaniard Juan Lluís Pons, aka Bisbal. The Mallorcan touched the bronze while setting the national record at 4m 13.30s and took the team from the depressing depths that hold him since Mireia Belmonte stopped acting as a savior.

Everyone wants Pons on the Spanish expedition returning from Gwangju. Some, for their good humor, others for their predisposition to work, and others because they find it funny that a boy with a physique so rare among the stalks that frequent the pool, just 1.70 high, without the power or the Levers of swimmers who fill the finals, have so much talent to flow in the water at the speed of the best. He was an object of sympathy until the last day of the World Cup made him the most outstanding swimmer in Spain's performance with fourth place in the final of 400 styles. On the return trip from South Korea, besides being very funny, Pons was the most respected.

"Juanllu's record of Spain gives us joy to get better," said Fred Vergnoux, the head coach, with the worried tone of who has seen him black. “It is very worthwhile to be here for a week like him, without competing until the last day. And when he plays, swim in a final doing his best time and making a national record. This is very powerful. ”

Bronze in the Glasgow European of 2018, Pons has earned a reputation as a solvent competitor since he beat his best personal brand – he made 4m 16.48s – at the Rio Games to swim the final of 400 styles. In South Korea, at 22, he offered his best version to make up a general performance that condemns Spain to reflect. As excellent as the performance of the Mallorcan is, the best mark of his life only allows him to occupy the 48th position of the ranking World of the best swimmers of styles of all time.

That Pons is the most exciting manifestation of the team one year after the Tokyo Games reveals the state of need in which Spanish swimming is. To aspire to medals when there have been 47 fastest swimmers in a specialty is to pursue a remote goal. If, at 28, Mireia Belmonte has begun her decline – and if she has not begun, it will not take long – the 2020 Games threaten a desert.

Mireia Belmonte was for years one of the best 10 swimmers of the ranking World of 100 butterfly, 400 styles and 800 free. A fabulous case. A unique exception in the history of swimming in a country that only produces figures sporadically. In June Vergnoux warned that Mireia arrived at the World Cup without proper preparation after taking a sabbatical half year in 2018. The precedent of the Kazan World Cup – that Mireia skipped due to an injury – a year of the 2016 Games forces Give credit to the swimmer of Badalona. But statistical studies indicate that it will be very unlikely that in Tokyo the Spanish will improve its Rio brands.

The poor performance of Spain was completed with the wreck of Hugo González. With Juanllu and Mireia, Hugo, 20, was the most gifted swimmer in the delegation. His rankings, 31º in 200 backs and 34º in 200 styles, place him miles away from his best brands and denounce poor preparation.

The fall compared to the Budapest World Cups, considering all disciplines, is alarming. In 2017, Spain participated in six online swimming finals, and obtained a gold and three silver in all Olympic disciplines, considering women's water polo. In these World Cups the team has participated in three online swimming finals and has achieved two silver in Olympic category disciplines, corresponding to the men's and women's water polo tournaments. The three medals won by the synchronized team – including Ona Carbonell's solos – correspond to disciplines without an Olympic category.

"The results are not what we expected," Vergnoux assumed; "But this is the photo of the Spanish swimming and we don't have a day to lose to prepare the Tokyo Games."