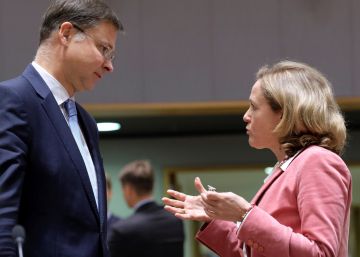 Government need margin for the next Budgets. So it will try to minimize the community tax rules to soften the path of deficit reduction this year and the next two. Vice President Nadia Calviño will meet next week in Brussels with Commissioners Valdis Dombrovskis and Paolo Gentiloni to discuss the possibilities of relaxing the pace at which the hole in public accounts is closed. Brussels does not want to comment before listening to Calviño, although community sources believe that Spain does not have much room to delay adjustments.

The economic vice president will report next Monday to her European partners on the guidelines of the new Pedro Sánchez Executive. According to sources from the Ministry of Economy, Calviño will not yet expose his intentions to ask arnica for the shortfall of the deficit. He will defend that “budgetary discipline and structural reforms are compatible with inclusive growth.”

And diplomatic sources believe that there will be hardly any debate: Spain continues to grow and, although more slowly than desired, the deficit continues to decrease. It will be, then, outside the Council where Calviño will meet Dombroviskis and Gentiloni. The vice president wants to know how far Brussels will open its hand to set a new deficit path for 2020 and the following two years.

Actually the adjustment for 2020 has already been approved by the Council of European leaders and therefore cannot be modified. This requires measures that reduce the deficit permanently worth 0.65% of GDP, the equivalent of about 8,000 million euros. However, the Spanish Government can try to speed up the maximum indulgence granted by European rules once it has left the guardianship for excessive deficit.

These rules allow breach up to 0.5 points of adjustment in two years. In 2019 Spain also had to make an effort of 0.65% of GDP. But nothing was done and, consequently, he ate all that margin. Now, the Sanchez Executive will argue that last year was a special exercise, since he was in office, he could not approve the Budgets and there was a slowdown in the activity. That is, it will ask that 2019 not be taken into account and that the counter be reset. This would allow the inclusion of winks to Podemos and other parties. Although it would not be large amounts, as the rise in pensions and public salaries will eat much of the increase in revenue. Especially when this year Article 135.2 of the Constitution has entered into force, which obliges to abide by what Brusela commandss.

The Government will also ask for margin based on the economy still having idle resources. It will use low inflation, the foreign surplus and a high unemployment to defend that the economy is not overheated. Therefore, the structural deficit – one that is corrected by the cycle situation – would actually be smaller than the one calculated by the Commission. And the required adjustment should be smaller.

In addition, there is a precedent for what happened with other countries in a fiscal situation similar to Spain. Last October, several governments presented plans that expedited the permissiveness of the Commission, without exceeding it so that it would not return the Budgets. This was the case with France, Italy or Finland, whose Budgets the Community Executive warned of the risk of non-compliance but whose result will not be pronounced until the end of the year. Italy and France justified it by the need to address the social emergency and deal with the economic context.

In this way, Spain could well do something similar and submit a project with an adjustment on paper at around 0.4% of GDP. The Commission would refute the figures and conclude that there really is only a small adjustment of 0.2% of GDP or 0.1%. Especially since many of the taxes raised will take time to get under way and will have problems to apply. Even so, the Community Executive will assess that there is a certain correction and will not return the accounts so that they are redone.

Of course: Brussels will indicate that it appreciates a significant risk of diversion and will demand that the Government be vigilant and Take advantage of all the extra profits to lower the deficit and debt. In any case, the accounts will not be reviewed until the following year.

Until now, the path that the Government of Sánchez had proposed contemplated a reduction of the deficit from 2.5% of GDP recorded in 2018 to 2% in 2019. That 2% was a goal already self-imposed by the Socialist Executive : in the path of stability that the Parliament approved in 2017, there is still a 1.3% target for 2019. But in the 2019 Budgets that Sanchez failed to approve, it was changed to 1.8% because the legislated objective was considered to be Very difficult to achieve. Later, the president announced that the deficit would be 2% and not 1.8%, as there were no Budgets. At the moment the Fiscal Authority expects to end at 2.2% and the Bank of Spain, at 2.4%. Too close to 2.5% of 2018.

By 2020, Economy calculated that in a scenario without measures the deficit would end at 1.7% of GDP. Only for that he had that in 2019 there would be a deficit of 2%. With respect to 2021, Calviño will be able to renegotiate in May the size of the adjustment, since it is not yet set by European leaders.

According to Economy, the strategy is that next week Calviño will lay the foundations for a fluid communication between Madrid and Brussels to accommodate the income and expenditure measures to the maximum. Although some members of the Sanchez Executive have already tried Brussels on their intentions, there has not yet been an official communication in this regard. Therefore, the European Commission refuses to rule on another possible easing of the deficit targets.

Even so, community sources point out that there is not much interest in giving much more rope and remember that, far from opening the hand, the latest evaluations have been tougher with Spain, to which they have requested compensatory measures to alleviate counter-reforms such as linking pensions to the CPI.

A senior official also recalls that Brussels has urged Spain to take a Budget to the Commission and the Eurogroup as soon as possible. “The correct order is for the Government to present a budget plan, for the Commission to make an opinion and for the Council to discuss it. Not the other way around, ”he said.

Diplomatic sources ruled out that within the Eurogroup there may be greater tensions if Spain tries to rush the rules to spend something else. The important thing is that the deficit continues to decline according to the rules of the Stability and Growth Pact. In case of breaching this, then the conflict would be served as it happened with the previous Italian Government.