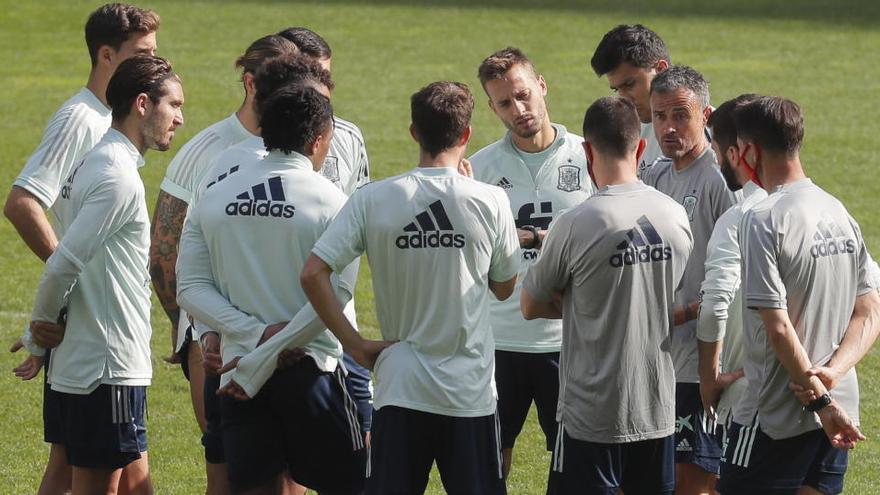 The Spanish selection soccer team will seek this Tuesday to add three new points in the League of Nations 2020 on your visit to a special place like the Kiev Olympic, where a Ukraine in need awaits you, in bad streak of results and punished by losses.

The selection returns to play in a setting of fond memories, scene of his last great conquest, the Euro 2012 and that defeat of Italy in the final (4-0), and with the hope of coming out with a new triumph that will make it depend on itself and qualify for the ‘Final Four’ as the first of a Group 4 that leads with two points of advantage over Germany.

However, no simple game awaits you in the Ukrainian capital against a team that wants to make up for itself after its latest setbacks, and that will also have the support of spectators, as happened last Saturday against the ‘Mannschaft’ where 17,500 fans attended who witnessed the defeat by 1-2 .

Spain won just over a month ago by a clear 4-0 against Andriy Shevchenko’s, in a match where the figure of Ansu Fati stood out and already decided after half an hour of play. Despite this, Luis Enrique Martinez he knows that the story could be quite different and has already warned that they will need “another very good game” to score three important points for the future of the national team in this League of Nations.

The three-time champion of Europe met many problems last Saturday at the Alfredo Di Stéfano to beat Switzerland in a not overly brilliant match and with a lot of intensity on both sides, so the most likely thing is that the coach will introduce some changes to refresh the eleven and have the high rhythm, especially in the pressure up, one of the aspects that worked best against the Swiss together with defensive solidity.

Where less changes are expected in theory would be behind, where the Asturian has the loss of Diego Llorente, where the couple Sergio Ramos-Pau Torres seems more settled every day. Jesús Navas should occupy the right back, while Reguilón could be the main novelty for Gayà.

In the middle, Luis Enrique has many variants and the main question is whether Busquets will remain as ‘5’ or Rodri Hernández will enter. Merino scored at a high level on Saturday and it looks like he will keep his place, while Canales and Ceballos would compete for the other place after delaying Dani Olmo against Switzerland did not work out well.

Finally also news is expected above where Gerard Moreno will be absent due to injury. Spain did not play with a pure ‘9’ last Saturday and Rodrigo Moreno, who did not play for a minute, could return to the eleven, with the possibility that Ansu Fati and Adama Traoré will join on the sides. The blaugrana was not as brilliant as against Ukraine, well supported by the Swiss defense physics, while the ‘Wolves’ was very incisive when he entered the second half.

The team will try to have much more control of the game after certain problems in the duels against Portugal and Switzerland against Ukraine that seeks his first victory against ‘Roja’ after accumulating five defeats and a draw2-2 precisely the first time they met in 2003 and with Shevchenko then on the field.

The Ukrainian team arrived in Madrid on September 6 in a great run of results, but since that win, they have suffered two more defeats this week, one hard win against France (7-1) and a tighter one against Germany (1-2), where it already recovered troops after a week marked by positives for coronavirus.

COVID-19 has devastated ‘Sheva’ in the goal with up to four affected (Pyatov and Madridista Lunin, the two starters, Pankin and Toshich) and it will not allow him to count on midfielder Stepanenko, central Matvyenko and forward Junior Moraes. These casualties are joined by the injured Zinchenko, Kryvtsov, Konoplyanka, Buyalsky and Supryaga, and Malinowski, due to suspension.

In spite of everything, he left a good image before the Germans and will take the field with the lesson learned from the win over a month ago and with the desire for revenge protected by his strength as a local since the arrival of the former striker to the bench since until the defeat against Germany he had ten undefeated games, with nine wins and a draw.