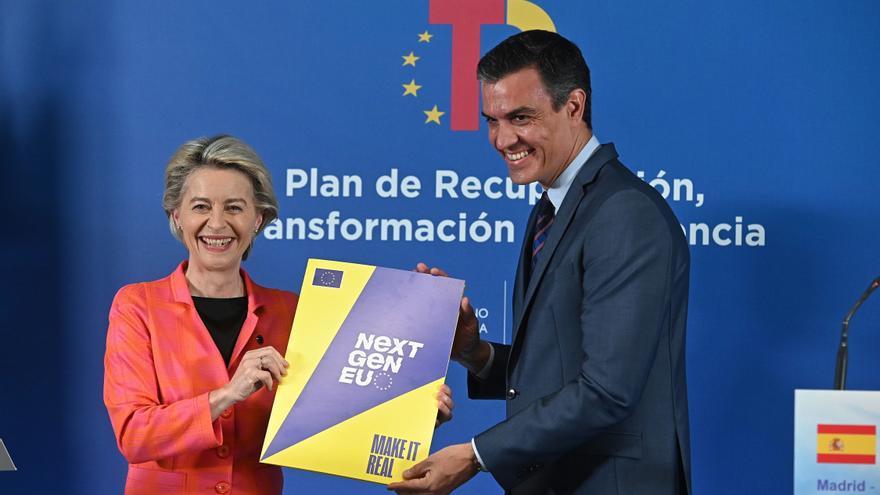 Spain was one of the first countries to deliver the reform plan to the European Commission on April 30. It was one of the first countries to receive the approval of the plan, last June, and the pre-financing part: 9,000 million in August. And, now, it has become the first EU country to request the first tranche of the remaining bulk, in this case 10 billion, which it hopes will arrive before the end of the year, although the maximum terms – up to three months – could make them take a little longer.

“A new milestone in the launch of our Next Generation EU recovery plan”, the president of the European Commission, Ursula von der Leyen, tweeted: “We received the first payment request from a Member State. From Spain, worth 10,000 million euros, to finance energy efficiency projects, sustainable mobility and training projects. Now we will evaluate and decide quickly “.

What the European Commission has to assess is the fulfillment of 52 milestones, developed until mid-2021, so the Government expects the ratification to be smooth. The Commission has up to two months, and then the Council – the 27 governments – up to one month.

This Monday it was already announced that the petition was about to take place. “In these very days”, The European Finance Commissioner, Paolo Gentiloni, said: “We will receive in these same days the agreements with Spain that finalize the disbursement schedule that we call an operating agreement. It will be finalized in the same next few days.”

The deal –Operational arrangement– These are operational provisions for the 27 that detail the mechanism for monitoring compliance with the milestones and objectives of the reforms. The Minister of Finance, María Jesús Montero, signed it on November 4; Gentiloni himself, number 9; and the Commission and the Government made it public on November 10.

As indicated in the Regulation of the Next Generation EU approved last February by the governments and the European Parliament, the operational provisions must be signed by all countries as a preliminary step to receive disbursements, which in the case of Spain are 140,000 million, between transfers and credits. However, Spain, to date, has only requested the part of transfers, 69,500 million euros, of which 19,000 are expected before the end of the year.

“We hope they will arrive before the end of the year”, said this Monday the economic vice president, Nadia Calviño: “Spain will be the first country to request the payment corresponding to the recovery plan, thanks to the fact that we have already effectively met the milestones and objectives required for this first semi-annual payment “.

Calviño added: “It is expected that between now and the end of the year we will meet another set of objectives, among which is the labor reform, and other milestones from the point of view of investments that will correspond to the payment of the first semester of 2022 “.

The request comes 24 hours after Brussels cut Spain’s growth expectations in 2021 by more than a point and a half: from 6.2% announced in July to 4.6% of the autumn forecasts published this Thursday. This reduction also means leaving Spain, which was at the head of European growth, below the average of 27, which stands at 5%. Of course, for the next two years, Brussels does foresee a growth in Spain that is higher than the European average. Thus, the European Commission believes that Spain will grow 5.5% in 2022 –4.3% on average for the EU– and 4.4% in 2023 –2.5% in the 27–, so Spain will not will recover its pre-pandemic economic levels until the first quarter of 2023.