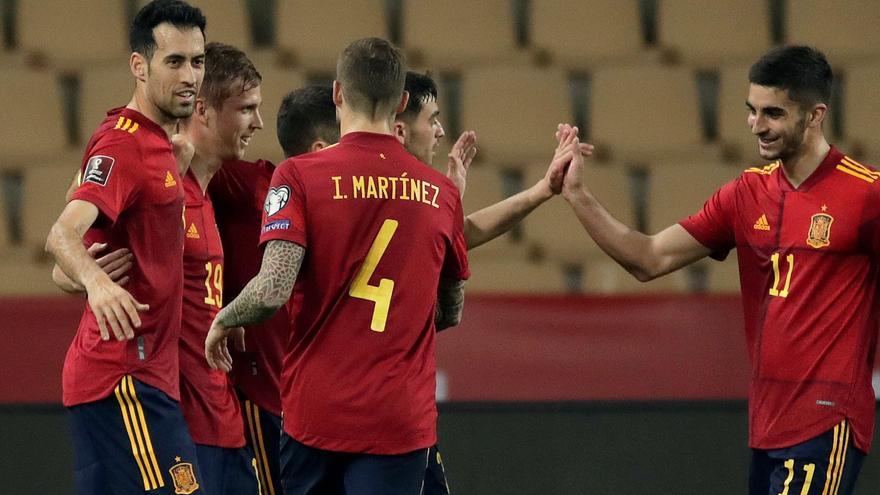 The Spanish team clearly beat that of Kosovo (3-1) in the Sevillian stadium of La Cartuja and dispelled the doubts that arose in the third day of group B of the qualifying phase for the World Cup, after dominate an opponent who only stretched in the second half, already with an adverse 2-0, and thus straighten the course towards Qatar 2022.

After a good first half, Spain took the lead with two goals in just two minutes from Dani Olmo and Ferrán Torres, who also scored in the 1-2 win in Georgia, after the first half hour, while after the break Kosovo shortened distances after a serious error in a departure of goal Unai Simón, then flushed with Gerard Moreno's 3-1 a quarter of an hour from the end.

La Roja was playing straightening their way to the Qatar 2022 World Cup, after the unexpected setback last Thursday at home against Greece (1-1) at the premiere of this phase, and thank goodness for Luis Enrique's team that Leipzig winger Dani Olmo fixed what would have been a major mess with his goal from triumph 'in extremis' in Georgia (1-2).

The selector he varied his eleven again for a more transcendent appointment than a priori would have been thought against a low-level rival like Kosovo, and he did so with four changes. Marcos Llorente returned to the right side for Pedro Porro; Íñigo Martínez came in behind for Diego Llorente: Koke in the middle with Busquets and Pedri, for Fabián; and Olmo for Bryan Gil, the discarded of the 24, in the offensive trident along with Ferrán Torres and Morata.

The big surprise was the absence from the line-up, for the second consecutive game, of captain Sergio Ramos, who turned 35 this past Tuesday and the player with the most caps for Spain, with 179.

The Spanish team came out strong, with some urgency to try to make things clear to the team led by the Swiss Bernard Challandes, and soon, without fuss, they worried with a center behind Ferrán Torres who did not find a finisher and, after the clearance, with a Jordi Alba centrochut that went away.

Spain took over the ball in midfield and full-backs Marcos Llorente and Jordi Alba always looked ahead, although near the Kosovar area he did not have the precision necessary to take clear passes or shots that put Kosovo's behind five in trouble, a bit nervous and the opponent's weakest line.

The possession of the ball was, by far, the Spanish team, but it lacked one more point of clarity and depth in attack against an orderly Balkan team, condemned to defend with discipline and who did not create any danger at the top, while the Red pulled patience to continue with its harassment, until it reaped the fruits.

🔥This boy only knows how to score GOALS! Dani Olmo puts her in the very squad #DestinyCatar

It was, again, Dani Olmo, the protagonist with his goal in the 1-2 victory suffered last Sunday in Tbilisi, who opened the 'can' with a goal at 34 minutes, receiving a service from a active Jordi Alba, profiled and, with a accurate and tight shot with the inside of the right foot, beat Samir Ujkani on his left squad. This display of talent from the Leipzig player gave new energy to Spain, which two minutes later, in the 36th minute, increased its income with Ferrán Torres 2-0, with a very strong cross shot, also with the right and after opening the ball his band Pedri, who slipped without remission into the goal of a Kosovar team that had begun to falter.

📈Fourth goal scored by the footballer at the Sevillian stadium

In the resumption, and after the Red, absolute dominator of the clash, could go with a wider marker at halftime if they had had more skill Morata, from the front, and Eric García, in a header, the script did not change. With everything under control, Morata on one occasion, an active Ferrán Torres on two and Olmo on another could score in the first quarter of an hour of the second half, but the lack of success and Ujkani's interventions prevented it.

Kosovar coach Bernard Challandes made offensive changes as Lirim Kastrati entered for Rashica and Zeneli for Kololli. His team took a step forward and, although Spain continued with its clear dominance and hardly struggled, it suffered from more aggressiveness in attack and this gave rise to the Balkans, to some extent, growing.

After a warning from Kastrati when taking advantage of a slip by Eric García, which diverted Busquets towards the goal and forced Unai Simón to intervene, Kosovo surprised in a strange action in which the Athletic goal left his area to cut a ball and, after controlling badly, he moved away almost to the midfield leaving his goal free. This serious failure led to the 2-1 of the Kosovars in the 70th minute, when Besar Halimi took the ball from him and, first and foremost, he scored a great goal from afar and without Simón in the goal, despite the vain attempt by Marcos Llorente to clear the desperate. However, Spain, already with Fabián and Gerard Moreno in the field, reacted.

⚽️Halimi's goal! Unai Simón, who was trying to get out with the ball played, loses the ball and the Kosovo FF player scores the first for his team #DestinyCatar

Thus, the Villarreal striker, in his first match of this international window because he had just come out of an injury, rounded off the clear triumph of the Spanish team with the final 3-1 by heading a corner kick at the first post in the absence of a quarter of an hour for the conclusion.

In this final stretch, Luis Enrique also took out Canales and Rodri, for Olmo and Busquets, and for Sergio Ramos - he reached his 180th match with Spain - for Eric García, and La Roja sought more goals, but without success, in part due to their lower intensity and success in the second half of a match in the which exhibited a better image.

Incidents: Match of the third day of Group B of the European qualification phase for the Qatar 2022 World Cup, played behind closed doors at the La Cartuja stadium, in Seville. Lawn in perfect condition.

Survey: After the victory against Oviedo, do you now see UD Las Palmas as having the potential to go up to the First Division?