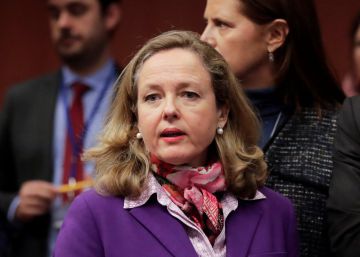 The Google rate, whose payment should be split quarterly, will be paid exceptionally this 2020 at the end of the year, as the economic vice president Nadia Calviño advanced on Monday in Brussels. The reason is not trivial. The Google rate It is a tribute that is at the center of the international debate and on the radar of several countries. It aims to make large platforms such as Google or Facebook tax in countries where they do business instead of diverting profits to territories with low taxation. Its implementation is however complicated before the threats of the United States, headquarters of the world’s leading technology companies, to impose tariffs to those who tax the activity of their companies.

Washington’s challenge has reached the heart of the EU, which has threatened new commercial rates on cars if it goes ahead with its digital tax project, which is currently standing still after negotiations between member states failed.

In the case of France, intimidation has taken effect: Paris launched the tax, and even collected it, but faced with Donald Trump’s threat of applying 100% tariffs on products such as wine decided to freeze payments until the end of the year. Spain thus joins the French initiative: it approves a national tax, but hopes to get into the car of a global rate. The French route “may be a model for Spain,” admitted the Minister of Foreign Affairs, Arancha González Laya.

This calendar aligns with OECD plans, which studies how to change international fiscal rules in the face of globalization and the rise of the digital economy. The agency has been working on a proposal for months that will agree with the 137 jurisdictions – including the US – that participate in the initiative, and expects to have a list ready. Google rate global at the end of 2020. According to their estimates, this tax would allow to raise about 100,000 million dollars (about 92,000 million euros) per year.

For the moment, the debate within the OECD revolves around two proposals: that large corporations — not only technological ones, in a nod to the United States — pay tribute wherever their users are; and that a global minimum corporate tax rate is set to discourage the diversion of benefits to territories with more advantageous fiscal rules.

France was one of the pioneer countries, and the most vociferous, to claim a Google rate to the foreign technology platforms that operate in its territory without hardly paying national taxes. Despite threats from the United States, the National Assembly approved the GAFA rate in July 2019 (by its initials: Google, Amazon, Facebook and Apple). Paris denies that it is a tax against US companies, as Washington says.

The first charge of this rate – which taxes about 3% of the turnover of technology companies in the country where they obtain annual income of at least 750 million euros in their global digital activities – was made in November. But given the response of the Trump Administration, which threatened to impose a tariff of up to 100% on imported French products, such as wine, worth 2,400 million dollars (about 2,200 million euros), France took a step back.

During the Davos forum, in January, it announced the temporary freezing of the tax until the end of the year to give the OECD time to present – and for countries to approve – an internationally agreed rate.
The agreement between Paris and Washington is that the French treasury will not charge the Google rate in April, when I played the next payment, nor the expiration of November. But if at the end of the year no agreement has been reached, it will claim the money, says the Macron Government, which has not said however what it will do if Washington then makes its threat effective. Paris says that if the rate approved by the OECD is lower than the one it has already charged, it will return the difference to the companies affected.

Spain has been favorable for the OECD or the EU to take the lead in the design of a digital rate, but at the same time it has made it clear that It would move forward with its own tax in the event that global negotiation fails. “We are working on the international and European level, but without giving up moving forward at the national level,” Calviño said Monday. Lluís Pellicer.

The Minister of Finance, María Jesús Montero, had already announced last week that the two normative projects on which the Google rate and the Tobin rate —Which are not approved via Budgets for being newly created— they were ready and about to see the light. The Government presented the bills before the Cortes last year, but they declined after being put on duty by the early call for elections on April 28.

Sources of Finance assure that the norms that will foreseeably be approved this Tuesday would almost totally trace the texts that were presented last year. The Google rate It will have a rate of 3% that will be applied on digital companies that invoice more than 750 million euros in the world and whose income in Spain is greater than three million. The text presented in 2019 defined three taxable events in which the participation of users was decisive for the creation of value, and that due to its breadth they would end up affecting not only technological: advertising aimed at users of a digital interface (page Web, Technological platform, software or social network); provision of platforms that allow users to locate other users to trade with them (the paradigmatic case is Amazon) and the sale or transfer of data collected from users of a Web or platform.

The tax on financial transactions or Tobin rate It will tax with 0.2% the sale of shares of Spanish companies with stock market value greater than 1,000 million. The financial intermediaries that execute the purchase order will be the ones who pay the treasury. Both public and private debt and financial derivatives will be excluded. Countries like France, Italy and Belgium already have similar figures, and the EU has set up a working group to try to harmonize national levies and avoid tax competition between states.

The Government calculated in 2019 that these measures will yield revenues of 2,000 million euros. The technicians union of the Ministry of Finance considered Monday that these forecasts “could be overestimated.” A warning that other organizations, such as the European Commission, already made a year ago.

The Council of Ministers will approve on Tuesday the repeal of the justified dismissal of employees who have missed work eight days or more in a period of two months provided that during the preceding 12 months they have accumulated 5% of leave on business days, or for missing 25% in four months even if those absences are medically justified.

The Government will do it by decree law, which implies that it will come into force immediately and then it will have to be validated in Congress. The plans of the Ministry of Labor go through the direct repeal of article 52.d, which regulates it. This does not even mean a return to the previous situation, to the labor reform of 2012. Until then – and since 1995 – this objective dismissal was legal provided that any of the aforementioned requirements were met, but in addition the company should have an absenteeism rate that will exceed 2.5%.

Since the Minister of Labor, Yolanda Díaz, took office, she has pointed out this repeal as the first step she was going to take to substantially change the entire labor reform of the PP: “I’m not even going to social dialogue. The preservation of health is above any issue. ”