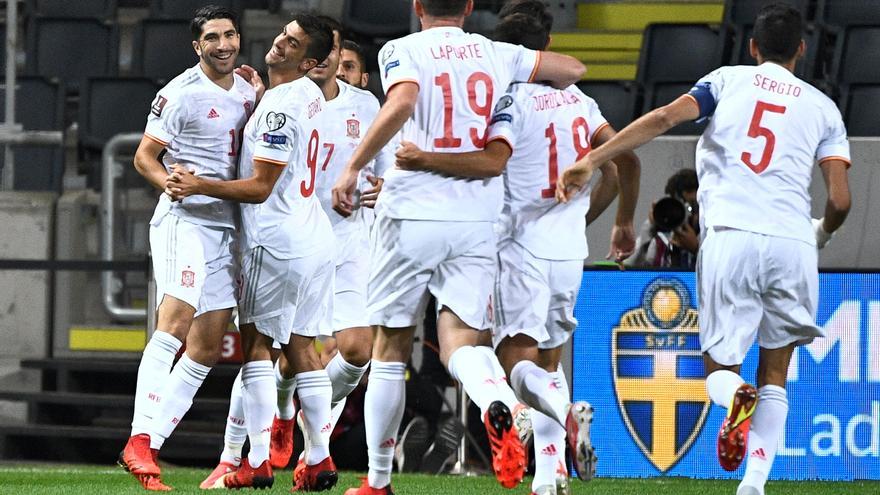 The square with direct access to the World Cup 2022 is put into play in the reunion of La Cartuja, the reissue of the appointment that opened the way of Spain in the last Eurocup, before a Sweden which was the last selection that left the team of Luis Enrique and, before, it placed it on the brink of the abyss in the World Cup qualifying phase, which presents a final chapter in a ‘final’ in which the Red serves the tie.

Decades ago, qualifications for World Cups and Euro Cups were held in Spain. The ‘golden generation’ of Spanish football, which signed the pass to the unforgettable event of 2010 with full of triumphs on its way, badly got used to the fan and at present it is not valued. It is considered an obligation. Spain has been in the last eleven World Cups and falling to the repechage is a discredit that has become the risk of failure, due to a new format of direct knockouts to a match full of danger.

To avoid what in 1974 left Spain out of a World Cup for the last time, in a playoff game against Yugoslavia, Luis Enrique Martínez’s men will not betray themselves or speculate. Sweden needs to win to get the pass and that, today, is a relief for a team that is choked by rivals who bet on defensive approaches and shines against those who come out to play. Whatever their names are.

It is common to see Spain impose a style against the European and world champions, Italy and France, and disfigure itself through touch and lack of depth against others such as Greece and Kosovo. “We are not going to speculate, we are going to press up and take risks”, Luis Enrique advanced, because the opposite would be to betray himself and his players. Thus, with the non-negotiable 4-3-3 and with tweaks in an eleven that he never repeated and that lately has up to six changes on average between games, the selection will be found again with La Cartuja.

The defeat of Slovakia in the last match of the group in the Eurocup helped to improve the memory of a stadium that did not have the atmosphere of a big event in any of the three matches that Spain played in Seville, longing for the atmosphere of a magical city, always linked to his team who came to whistle at one of his players. Alvaro Morata lived hell since he forgave a clear chance against Sweden in the first match. He even denounced insults of his own liking to his wife and children. For him, it is special to return to the same stage and retaliate, as he did in the last duel, with a key goal.

An image of midfielder Sergio Busquets with the Spanish team. Reuters

Luis Enrique booked in Athens, due to the danger of a card that would make them complete a cycle, to Jordi Alba and Sergio Busquets, the only footballers in the convocation of those who touched the footballing sky, and they will return to an eleven in which some more retouching is expected. Dani Carvajal, who returned after a year and two months of absence due to injuries, can leave his place to César Azpilicueta and Pau Torres to enter for Íñigo Martínez, who ended up with a twin loaded in Greece. Carlos Soler’s option wins integers, as well as Dani Olmo’s entry into the offensive trident to regain his status.

For Spain, after the turnaround of the last day, the draw serves but Sweden is the selection that generated the worst memories in 2021. The defeat in Solna (2-1) aggravated the situation in a group that started on the wrong foot with the tie yielded against Greece in Granada (1-1). In two games, the national team lost and drew 0-0 against the rival against whom the entry square to Qatar is being played.

The Swedes arrive at the big date between discouragement over the hard defeat in Georgia and the desire for revenge. Sweden, which at least has already secured second place and play the repechage, needs to win the La Cartuja match to be first and get a direct ticket to Qatar.

The Swedish team does not hide its disappointment or has sought excuses, although without forgetting that it should have sentenced the game in the first half, when it wasted half a dozen chances. Zlatan Ibrahimovic, who reappeared after several months, has admitted that he was not inspired by the completion and that he is still not one hundred percent, although he has offered to start if the coach, Jan “Janne” Andersson, so decide.

The return of Ibrahimovic has awakened the doubts about the role of the top star of the soccer Swedish, still in his quarantine: Sweden did better the almost five years of his absence than with him, perhaps because his presence intimidates his teammates and conditions the team’s play, despite his indisputable quality.

The irregularity of the young man Kulusevski, who has not enjoyed too many minutes at Juventus lately, suggests, however, that Andersson will once again bet on the Milan striker. Who will be a safe starter is the midfielder Albin ekdal, indisputable with Andersson when he has not been injured, absent in Georgia due to suspension and talisman for his team.

The only two defeats suffered by Sweden in this qualifying round – in Athens and in Batumi – occurred without the Sampdoria player, who is essential in the defensive balance. Ekdal also started in the last two games against Spain, the 0-0 draw at the European Championship and 2-1 in Stockholm, and although he favors Luis Enrique’s team, he emphasizes that Sweden knows how to “bother” him.

IOC calls Peng Shuai again and insists he is okay