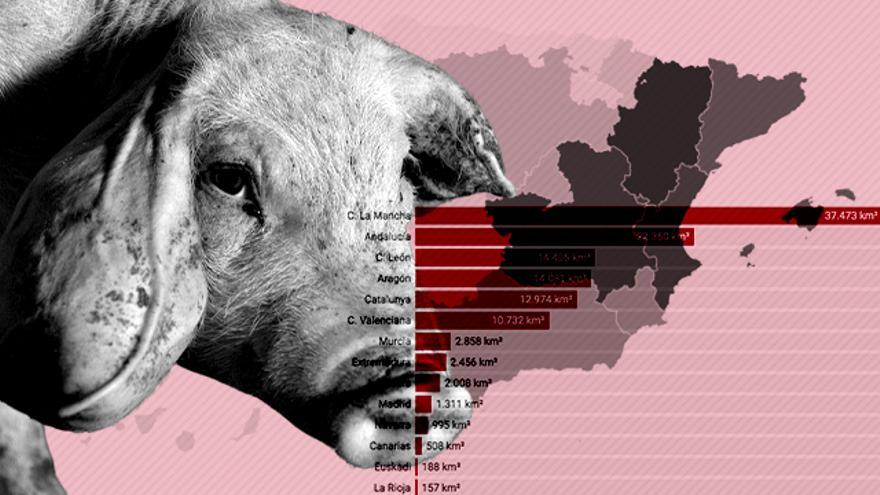 Spain is paying the price to become the world’s pig factory. The country already leads the sector in Europe by expanding factory farming, which carries a costly toll of water pollution, greenhouse gas emissions and toxic ammonia.

The economic indicators make the Ministry of Agriculture consider that “the Spanish pig sector has continued its consolidation as one of the leaders in the world market despite the uncertainties.” In contrast, the director of Greenpeace, Eva Saldaña, understands that “it is time to address the issue of macro-farms for their contribution to the climate crisis and water pollution.” The most recent data clearly sets out this picture.

The strength of the Spanish pig has been based on the advancement of the industrial model of large-scale production. Reports from the Ministry of Agriculture describe this transit. More and more pigs are being raised and more pigs are slaughtered, but at the same time fewer establishments are operating. The macro-farm model is being imposed. There is evidence of “a notable decrease in the total number of farms”, together with the “notable increase in larger farms, especially the largest ones”, the Ministry points out in its analysis of the last year closed, 2020. Greenpeace adds that the The formula consists of “producing a lot, producing quickly and at the lowest cost”.

Group I, II, III … is a technical nomenclature to classify according to production capacity. The first are limited to 120 larger livestock units (LU), the second to 480 and the third to 720 MU, according to the Royal Decree that regulates them since 2020. But, to understand the size, these MU must be translated into pig specimens. . The Dehesa Observatory of the Center for Scientific and Technological Research of the Junta de Extremadura expresses it like this: group I can house 350 animals for fattening, II up to 2,000 pigs plus 200 females to reproduce and those of group III up to 5,500 bait specimens and 750 breeders. In addition, the autonomous communities can expand this quota of large farms by 20%, that is, 1,100 pigs added.

Agriculture and livestock accounted for 14% of all greenhouse gas emissions in Spain in 2020. That year, during the peak of the COVID-19 pandemic, there was an almost unknown descent in emissions that cause climate change. It was lowered for the first time from the level of 1990. But the agricultural and livestock sector increased the amount of gases that it released into the atmosphere. Livestock released 24.8 million tons. The increase was mainly due “to manure management,” according to the advancement of the emission catalog of the Ministry of Ecological Transition.

The proliferation of large farms has made 87% of the pig sector in Castilla-La Mancha already industrial and that in Extremadura it has exceeded 50%, according to the official responses of the autonomous communities to Greenpeace. The Balearic Islands are at 55% and Catalonia at 99%. Aragon is the community with the most type III farms with 628, followed by Catalonia (495), Castilla y León (316) and Castilla-La Mancha (161).

Large capacity facilities involve many animals and therefore a lot of waste. The large amount of manure from concentrated pigs has made, along with other factors, that Spain has never complied with the limit for emissions of ammonia into the atmosphere marked by European regulations. From 2010 to 2019 it has always exceeded the limit of 353,000 tons due to the “increase in the livestock herd and a rebound in the use of organic (manure) and inorganic fertilizers”, as recognized by the Government emissions inventory. Given this circumstance, the European Union has changed the ceilings making them more permissive as of 2020.

Livestock production is responsible for 80% of the agricultural nitrogen that is filtered and pollutes the waters, according to the European Commission. In Spain, 40% of the water bodies are in poor condition, not everything is due to discharges from livestock, but almost half of the areas with aquifers damaged by agricultural waste they cannot be recovered within the legal period of 2027, as the Government itself has admitted.

“How is it possible that an arid country, 15 times smaller than the US and with a deficit in feed, wants to become a leader in pig production?” Mari Sol Gómez, who heads the opposition to this livestock model in the Tierra de Alba region in Zamora, wonders. “They consume a huge amount of water that they return to the environment in the form of slurry,” he says.

The truth is that Spain is especially exposed to this problem of water pollution by nitrates. In fact, almost a quarter of the territory is considered a vulnerable zone, that is, areas “whose runoff flows into waters affected by pollution or into waters that may be affected by pollution”: about 122,000 of the total 500,000 km2. And more than half of the useful agricultural area of ​​the country.

On October 11, the European Commission ruled in a report that Spain has a “systemic problem in managing nutrient pollution from agriculture” and that it must urgently adopt additional measures “to comply with the law. The review indicates that “a high percentage of groundwater monitoring stations continue to show levels above the maximum of 50 mg per liter.”

The Commission understands that some of the vulnerable areas declared by the autonomous communities “are very limited”, which implies “a very fragmented designation and a lower effectiveness of the action programs”. Spain has a sanction file open precisely for this matter.

“Who is going to want to come live here if you can’t even open the window?” The question is from Inmaculada Lozano, voice and face of the rejection of macro farms in Castilla-La Mancha. Since the beginning of the implementation of the large-scale industrial model, the dilemma has arisen between the possible creation of jobs in rural areas associated with these operations and their environmental impacts.

The organization Ecologistas en Acción has just analyzed the demographic evolution according to the INE of municipalities with less than 5,000 inhabitants from 2000 to 2020, crossed with the livestock censuses of the autonomous communities of Castilla y León, Aragón, Castilla-La Mancha, Catalunya, Comunidad Valenciana , Galicia and the Region of Murcia. His conclusion is that “Industrial livestock not only does not stop depopulation but also encourages rural abandonment.”

Their analysis shows that 74% of the municipalities with the highest load of intensive pig industry have either lost population or are gaining fewer inhabitants than similar towns, but without pigs. Their study covers 64% of all populations with 5,000 or fewer neighbors and a high density of intensive pig herd in these autonomous communities. “In 81% of the provinces analyzed (17 out of 21) depopulation is being favored,” they say.

According to their data, the effects of Spain emptied This model intensifies over time and has already left more of a mark in the provinces that first adopted this formula, such as Zaragoza, Huesca, Barcelona and Lleida.

Lozano, who led the protests against large farm projects in Pozuelo and Argamasón (Albacete), sums up that “of course we like ham and blood sausage, but also being able to drink tap water and a town with a future for our children.”