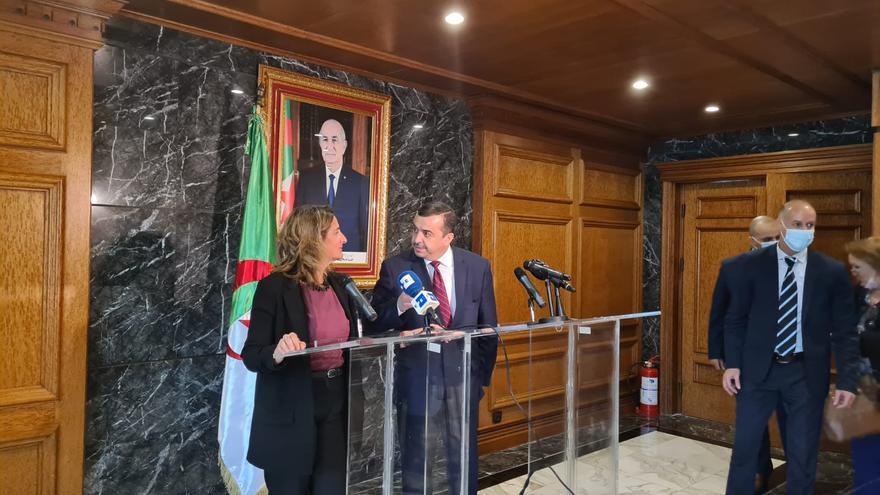 The conflict between Morocco and Algeria has ceased to be a bilateral altercation and appears to become a focus of confluence of issues of high global geostrategic significance in which the great international powers – the United States, Europe, China and Russia – are involved. few of medium size, but of special power of influence both in Algiers and in Rabat. Cross diplomatic fire that could alter the fragile balance of the Maghreb through a resurgence of economic tensions -in the energy order- and security, with a rebound in military spending by both contenders.

This compendium of risks threatens the stability of gas prices and supply to Spain and Portugal. Our country is in the midst of a difficult crossroads, of complex resolution due to the high voltage that presides over relations between Rabat and Algiers. Intissar Fakir, director for North Africa and the Sahel of the Middle East Institute (MEI), leaves a precise glimpse of the factors that hold back a possible imminent resolution of the puzzle Maghreb geopolitical and gas. In his opinion, “the recognition by the Trump Administration of Rabat’s sovereignty over the Sahara has blown up the Algerian efforts to isolate Morocco.”

Washington’s maneuver in favor of the Moroccan claim to Western Sahara was associated with the beginning of an urgent normalization of diplomatic relations between Rabat and Israel, which raised rashes in Algiers. Until unleashing new hostilities between two countries that have kept their borders closed since 1994, by unilateral Algerian decision, after the Moroccan accusation of complicity with the Marrakesh attacks two years earlier. A decision that has not prevented -explains Fakir- that both countries have achieved meeting points to transport Algerian gas to Spain from both sides of both geographical limits, forged as a result of war incidents, after Algerian independence from France in 1963.

The convalescence due to Covid-19 of the polisario leader Brahim Ghali in a Riojan hospital, which led to a change in the leadership of Spanish diplomacy, and the alleged support of Rabat to two parties that defend the independence of the Kabylia region – the MAK and the Rachad- to whom Algeria has hung the poster of terrorist organizations, unearthed the ax of hostilities, which has been diverted to the energy field. Because, in the middle of the tumultuous autumn, and with the social protest on the surface in Spain due to the increased cost of the electricity bill, Algiers decided to close the communicating vessel of the gas pipeline that it shares territorially with its western neighbor.

The drastic decision of the Algerian president Abdelmajid Tebboune – in force since November – was qualified days later with the promise to Madrid to increase the flow of the second gas pipeline, Medgaz. This submarine connection, owned by the state-owned Sonatrach, connects the HassiR’mel field with the Perdigal coast of Almería and connects with the Almería-Albacete gas network. It will help, but it does not guarantee a return to energy price stability.

Algiers has committed to the gas flow to reach 10.5 trillion cubic meters (bcm), from the current 8 bcm. This flow is far from supplying the 13 bcm of the Maghreb-Europe gas pipeline (GME), the network that crosses the Strait of Gibraltar from the Alawite Kingdom. From this energy connection, Rabat received as payment in kind 7% of the gas transported for domestic use. With the contractual cancellation of the GME, Algiers has ordered to solve its exports to Spain with methane tankers; at the rate of another 2.3 bcm per month, according to Enagás.

But the Spanish unknown remains unclear. In a way, because of a second component of the equation: the lack of European involvement in the Maghreb. This is how Francis Ghilès, an analyst at the Barcelona Center for International Affairs (Cidob), believes: Brussels “has never been strategically concerned about North Africa”, despite the fact that “the emptying of the gas pipeline speaks clearly of the importance of the area for the security and economic prosperity ”of the internal market.

Ghilès influences the vacuum of EU diplomacy already before the Arab revolutions of a decade ago, which allowed the landing in the area of ​​great superpowers such as Russia and China and other hegemonic nations in their geographical areas such as Turkey or Saudi Arabia and the emirates. And it insists that it is a “high-dimension error”, because it affects its neighborhood policy, and of “special relevance”, since this inaction covers a “great arc of potential crises”, from the Baltic to the Mediterranean, many of them cyclical -which have emerged or have been placed in limbo in the last quarter of a century- and which have given visibility, for example, to the Russian military and geostrategic rearmament and to the European tactical deficiencies in Syria, Iraq or Libya.

Neither European nor Maghrebian leaders – explains the Cidob expert – have given relevance to the solar energy capacity of the Sahara or its industries for the extraction of phosphates or chemical materials such as sulfur, very buoyant in Morocco, or Algerian ammonia, which would help to curb uncontrolled immigration and to ensure supplies to EU manufacturers. A vision that, however, they have captured in the Persian Gulf, some of whose countries – Qatar and the United Arab Emirates – have production centers in Algeria and Morocco.

Two markets classified as strategic by Spanish economic diplomacy in which there is already a high Hispanic business representation that competes with the French condominium. With more than 1,400 companies and a stock investment of more than 5,000 million euros in the Alawite Kingdom and more than 550 firms in Algeria, where Naturgy plays a special role, which has 49% of the Medgaz gas pipeline compared to 51% of Sonatrach, which owns 4% of the actions of the Spanish multinational.

The affair gas also leaves two other traces of the aftermath – by absence – of European foreign policy in the Maghreb. The first, that Algeria keeps its two gas pipelines open with Italy, through Tunisia – a country with which France has managed to green its influence – and the Strait of Sicily. Meanwhile, the opening of the spigot of the Medgaz is at the expense of a higher cost of the bill due to the unilateral attempts of Sonatrach to “update” its contracts with the Spanish Naturgy.

This kind of Spanish diplomatic kidnapping in its Maghreb triangle has given rise to analysts such as Gonzalo Escribano and Lara Lázaro, from the Elcano Institute, to demand “a Euro-Mediterranean energy narrative aligned with the EU Green Pact”, which incorporates renewable energies to a geopolitical scenario hitherto dominated by oil and natural gas, adapt to the proliferation of new natural gas producers, both Mediterranean and foreign, and create an adequate climate of energy neutrality reforms in the sectors and inaugurate a cycle in the EU with a more geopolitical focus on the region.

A recomposition that Josep Piqué, former Minister of Foreign Affairs and Industry, also values ​​in a recent analysis in Foreign policy, in order to persuade “two neighbors who do not speak” of the need to rebuild “geopolitical influence and leadership in North Africa”, despite “radically disagreeing with how the building in which they live and should be who ends up setting the rules ”. And that would shed some light on the Stockholm syndrome to which Spain’s bilateral ties with each of its North African partners are subjected.