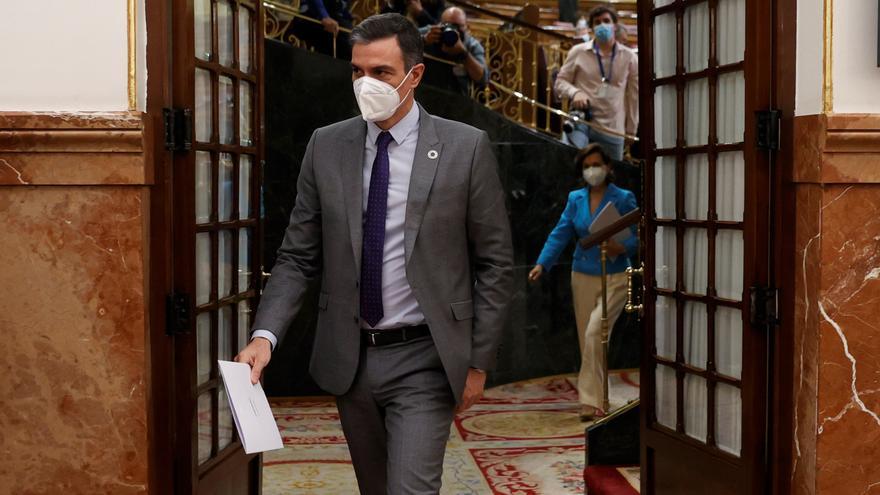 Pedro Sánchez defends himself against Pablo Casado in the face of accusations that the Government is responsible for the diplomatic crisis that has led to what the president has called a “challenge from Morocco” that has caused the massive influx of people from that country. “Spain is suffering a challenge from Morocco and we want to know which side the opposition is on,” Sánchez told Casado in the government control session. The president has assured that the PP uses any crisis, be it the pandemic or now the migratory one, to try to “overthrow the government.”

“Spain is going through the worst diplomatic crisis with Morocco”, Casado has told him, who has transferred the “support” of the PP “to guarantee sovereignty in Ceuta and for this to reinforce the border” before beginning a string of reproaches towards Sánchez for the “history of a crisis announced” by “diplomatic errors of the Government for years.” Casado has reproached him for the “loss of foreign weight” and has assured that “the chaos of his Government” is a “failure” for Spain outside its borders. “You chose the radical nature of Podemos,” Casado told him, who assured that “he cannot defend the Army while his Bildu partners ask for his departure from Ceuta.”

“He has shown that the Government is too big for him. He has not been able to manage the international crisis. Let him help, there is more loyalty in this opposition than in his Government,” concluded Casado.

“It has not been clear to me, do you support the Government or not?” Sánchez has asked him, who has reproached Casado for reaching out to him in a phone call this Tuesday and then making statements in which he does “just the opposite.” . “The same thing always happens. They use any calamity, also an unprecedented crisis with Morocco, to try to overthrow the Government of Spain and they are not going to succeed. This is the problem that Spanish democracy has. An unfair opposition to the interests of the State “, has affirmed Sánchez.

“It is not a migratory crisis, it is of another type”

“The right does not accept that the left governs in this country in a legitimate way because it has won the elections,” Sánchez has settled after the PP leader assured that he would be “uneasy” if he were a citizen of Ceuta when he saw “outrageous” to the president.

Sánchez has taken the opportunity to praise the work of the State Security Forces and Bodies as well as the NGOs that are working on the border of Spain and Morocco. It has also offered updated data on the returns of people back to Moroccan soil: 4,800 of the nearly 8,000 people who crossed the border.

Although the Government initially tried not to point out Morocco’s responsibility for its abandonment of functions in border control, it changed the tone throughout Tuesday until Sánchez spoke of “defiance.” “It is not a migratory crisis, it is a crisis of another type and it must be addressed,” Sánchez admitted in his response to Inés Arrimadas. “The lack of control in Morocco is not only a lack of respect for Spain but for the entire EU,” he told the Citizen leader, thanking her for the tone before asking her that “all opposition parties are with the Government at this very critical moment. ” “A state opposition is necessary, that they be with the state even if you are critical,” he said.

Arrimadas, for his part, has asked him to “correct important errors” in foreign policy to achieve unity between the opposition and the Executive on the crisis in Ceuta. “They have made many mistakes, they have created a diplomatic vacuum with very important countries. The Government must lead a joint action on the borders ”, has assured Arrimadas. “They have to make it clear that Spain is not blackmailed,” added the leader of Ciudadanos.