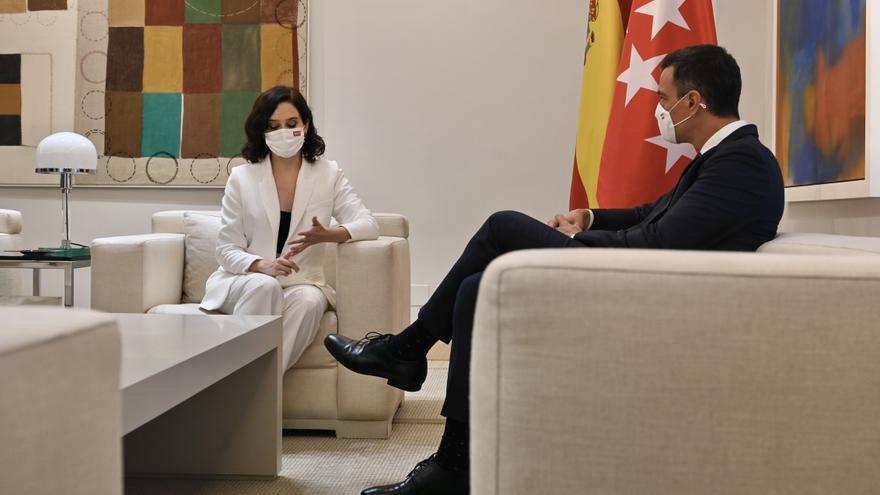 Isabel Díaz Ayuso has served as national leader when appearing after her meeting with Pedro Sánchez in Moncloa and has once again become the main opposition to the Executive. After making a brief intervention in which he has raised a handful of issues about the Community of Madrid, such as investments in Cercanía, a unique EVAU or making the Isabel Zendal Hospital available to the Government, which he has defined as “the best pandemic hospital of the world “, the Madrid president has dedicated herself to stirring up the Executive and, especially, the parliamentary forces that support the coalition. “Spain is kidnapped in the hands of minorities who hate it,” he said.

“We are in the hands of those minorities who hate this great nation of free and equal citizens,” continued the Madrid president, who has assured that “a Spain that nobody wanted” is being manufactured. Ayuso has insisted that those who “hate Spain”, who according to her have a “project of resentment and hatred”, “are unleashed, grown up”: “And we will all pay for it.” Although he has admitted that the Government may act “in good faith” in its policy of dialogue with the Generalitat, he has assured that with the independentists “an agreement cannot be reached” because, in his opinion, they always ask for more.

“My main mission in this meeting has been to remind the president what our project is as a community and ask him what his project is, where he wants to take Spain”, said Ayuso, who has spoken of “blackmail” and if “he is going to allow Spain to steal from the Spanish. ” “The interests and future of Spain and the future and interests of Pedro Sánchez are different. The deterioration of institutions, freedom and equality in Spain is very serious and our prestige and solvency in the world is at risk,” Ayuso continued. in his press conference in which he assured that Sánchez’s actions “lead to a breakdown of the constitutional order, to a change of model and a change of country if nothing prevents it.” As he has read in his initial speech, he has assured that there are “decisions that break coexistence and that alter the 1978 model.” In that section he has mentioned the national security law that has been approved by the Council of Ministers in the first round and that includes aspects traced to a project promoted by the PP. “If all power is given to the government, it will dynamite the democratic system,” he said.

“If he continues down this path, he will have to decide: either his future or that of Spain,” Ayuso warned Sánchez from the Moncloa press room. Asked about the national profile that she has shown in that press conference, Ayuso has said that it is her “responsibility” as regional president. “The representative of the State in a community should not only care about their homeland. We should care about what happens throughout the country. For me as president of the Community of Madrid what happens in Catalonia or Andalusia worries me,” said the Conservative leader, who has maintained a speech of confrontation of some communities with others, especially with Catalonia and Euskadi: “Neither Madrid nor any other territory can continue to be stepped on by those who hate Spain, by minorities who under racist slogans and for economic reasons and politicians, they are kidnapping our nation and our sovereignty. ”

Ayuso has also emphasized fiscal policy at a time when the Government intends to reform the system to avoid unfair competition (fiscal dumping) between autonomous communities. The Madrid president has made a fierce defense of the few taxes that are paid in the region -after asking the Government for help to finance investments to maintain the system to reduce the ratio of students in classrooms, for example- and has summoned the rest of autonomies to lower them. “I want a low taxation in Madrid that will be good for other communities because all the employment that is created here can be good for others,” said the Madrid president, who has warned that a tax increase will cause companies to leave. other capitals because “Madrid is universal”.

The Government reproaches that it asks for resources and lowers taxes

The Government spokeswoman, María Jesús Montero, has made Ayuso ugly to demand more resources from the State if she believes that she has “the ability to lower taxes.” “It is an incongruity,” asserted Montero, who has opted for a “certain fiscal harmonization” between the territories without this implying increases or decreases, as he explained. The also Minister of Finance has also taken the opportunity to list the funds that the Community of Madrid has received from the central Administration and has ensured that it obtained 13.3% more income thanks to that system than the previous year and that this figure prevented a 4% drop in his wealth.

“It has been the Government’s action that has allowed that reality not to occur. It is a fact that speaks for itself of the institutional loyalty that this Government has had with all the territories,” said Montero, who has precisely claimed Ayuso that loyalty when remembering that it has to be “back and forth and with the utmost respect for the competences that each one has”.

Sánchez and Ayuso have met for about an hour and a half in Moncloa in the framework of the formal meetings that the president holds with the heads of the regional executives when they are elected. A few weeks ago he received the Andalusian, Juanma Moreno Bonilla, with whom he had not yet met since 2019 and also with the Catalan, Pere Aragonès, with whom he noted the difficulties in resolving the political conflict, but they closed the third week of September to reactivate the dialogue table.