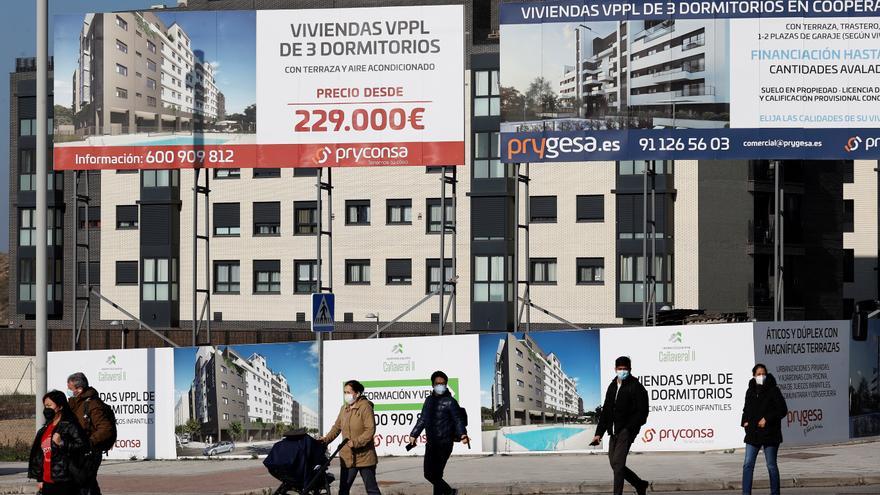 More than half a century has passed since the then Francoist Housing Minister José Luis Arrese advocated turning Spain into a country of owners and not of proletarians. An aspiration that, since then, has marked the relationship of Spaniards with real estate.

Now, well into the 21st century, the market is showing dual signs. On the one hand, the younger generations are showing signs that they are increasingly opting for rent, delaying the decision to buy their home, given the difficulties of access. On the other hand, the sale of real estate has recovered its steam after the toughest months of the pandemic and, to a certain extent, is returning to levels that had not been remembered for almost a decade.

This double reality, of tenants and owners, is also perceived in the emancipation model and in the alternative that young people choose. Ángel Martínez Jorge, ‘research assistant’ of the ESADE Center for Economic Policy, analyzes it in the study Spain is ceasing to be a country of owners among the new generations, where it focuses on three age groups (from 20 to 25, from 26 to 30 and from 31 to 35 years old) to find out if they are emancipated, either with or without a mortgage, between 2004 and 2020.

“In these fifteen years, the percentage of young people in this situation has fallen by half in all age groups except among young people between 31 and 35 years old, where it falls somewhat less,” he notes in his analysis. “It is difficult that in the future we will have a country of homeowners with paid homes if today young people do not even have a mortgage. In a society with increasing life expectancy and very substantial wealth inequality, it does not seem reasonable to expect that these young people simply inherit a property as a solution to the problem. “

In his analysis, he takes as a starting point the survey of living conditions prepared by the National Institute of Statistics (INE), which began to be carried out in 2004, in the midst of the real estate boom. Then, Ángel Martínez assures elDiario.es, the conditions of access to the home owned were easier: “You could finance a home 100%, they did not ask for as much job stability as is required today.” Now, young people “are emancipated less, and the vast majority no longer do so in their own home.”

Shortly after the turn of the century, among those between 31 and 35 years old, 57% of the emancipated had a home they owned. Currently, the percentage drops to 33%. The reason for this emancipation through rent is, mainly, “because there is no savings, you think ‘I am saving to have a mortgage’ and prices continue to rise,” explains Ángel Martínez Jorge.

A multiple combination in which paying rent involves putting down a substantial portion of disposable income, making savings difficult. At the same time, the price of flats rises and working conditions do not provide stability and complicate the mortgage grant. A situation of “perpetual tenant regime”, indicates Martínez Jorge. This makes it difficult to reach a mature age and have a home paid for in full.

“The fact of reaching the halfway point of your life with the house paid determines enormously the decisions that households make. If this becomes something less and less common, we can only hope a change in the way of acting of economic agents”, concludes the analysis published by EsadeEcPol.

The situation of the real estate market lives, therefore, this dual trend. While a part of the population clearly perceives the difficulties of betting on the acquisition of a home, the activity of the sector, the sale and purchase, is going through a heated moment.

The INE has just published that, in the last month of August, the sale of homes soared 57.9% compared to the same month of 2020. In total, 49,884 operations. A rebound that may be influenced by the pandemic, but that also reflects a significant increase, of 40%, compared to the eighth month of 2019. That year, 35,723 homes were sold. An evolution that places Spain at the highest levels reached since 2007. In other words, just before the bubble burst.

In the whole of the year, the sale of real estate grew more than 37%. And, above all, new housing advanced at a faster rate, 43.4%, compared to 35.7% for used housing. And, by communities, according to the INE, those that grew the most, only in the month of August, were La Rioja, Madrid and the Valencian Community, with increases in all three cases above 70%.

These latest data from the INE confirm a trend that different analysis firms have already been perceiving: that the real estate market has resumed its flight after the year with the greatest impact of the coronavirus, which slowed down the processes but did not stop them in their tracks.

BBVA Research highlights, with data up to July, that in Spain 12% more houses and flats were already being bought than in the same period of 2019. And, at the same time, the granting of mortgages has reached rates in these months that had not been seen for a decade.

The reason for this takeoff in the purchase of houses, according to this institution, is the demand contained during the months of confinement and the accumulated savings. But not for all families, only for those households “with greater job certainty”, indicates BBVA Research, which “would have seen an opportunity to use those resources” and, in some cases, opt for properties with more space.

On this occasion, despite the economic slowdown unleashed by the pandemic, the recovery time has been much faster than in other economic punctures. “While in previous crises it has taken between 23 and 26 quarters for the price (in real terms) to reach a minimum, this time it would have taken only seven”, indicates this study center. “The lack of supply in some key points, together with the increase in demand for investment reasons, will make prices continue to rise,” predicts BBVA.

It is not that during 2020 there was a collapse in the prices of flats. On a global scale, the Dallas Fed International Housing Observatory, cited by Caixabank Research in its latest report on the real estate sector, finds that house prices accelerated during the year with the greatest impact of COVID, as grow 3.6% in real terms. A year earlier it had only risen by 1.8%.

“The fall in construction activity in the second half of 2020 affected the delivery of homes, which added upward pressure on prices, especially in markets where the supply of housing was already scarce,” argues Caixabank Research, to which were added the low interest rates.

But, in the Spanish case, this rise was moderate, with a price variation of 2.1%, when in France it is above 5% or in Germany, 7%.

This analysis shows that the price of housing in Spain has been continuously rising for almost two decades, albeit at an uneven pace. “Between 2001 and 2006, credit to households increased from 47% of GDP to 78% and housing appreciated by 71%”, indicates this analysis center. “On the contrary, between 2014 and 2019, credit to households fell from 73% of GDP to 57% and the price of housing increased a moderate 8%”, summarizes Caixabank Research.

“The burden of household debt in most developed economies is lower than in the past international financial crisis. Therefore, in the event of an interest rate hike, the vulnerability of households would be lower,” says this institution. A separate case is, in this context of predictably rising rates, how access to housing will be for the younger generations, the ones who have the most difficulty finding a home to own.