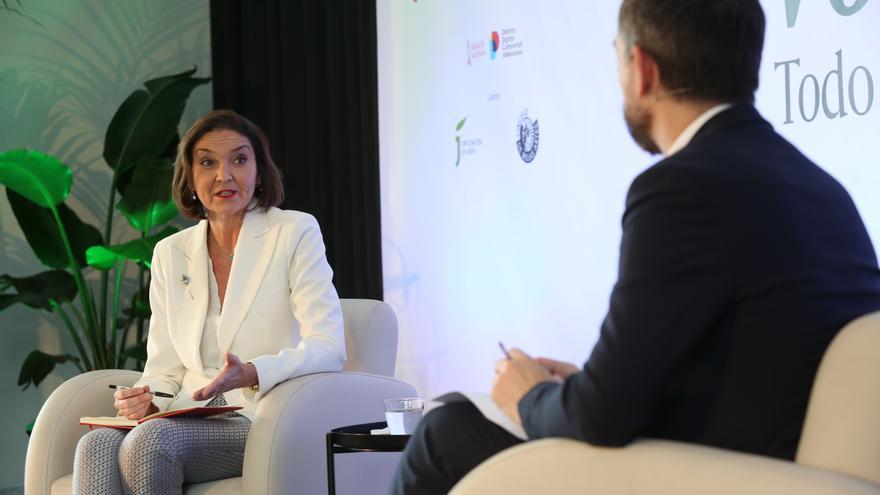 Spain is going to propose to its European partners a plan to promote tourism for the elderly, which will help deseasonalise visitor flows and also reinforce European values. This was stated by the Minister of Industry, Commerce and Tourism, Reyes Maroto, in charge of closing the conference 'We are back: A country of tourism', in an interview conducted by the director of elDiario.es, Ignacio Escolar.

“The war is an attack against European values, which are freedom, solidarity or diversity”, the minister stated. For this reason, Spain “has proposed that a plan be approved at the European level, which we have called senior tourism, a European Imserso, which reinforces these Europeanist values, which allows tourist flows to be seasonally adjusted and reward those who have suffered the most from the pandemic. , who are our elders”.

Maroto has indicated that the "proposal is on the table", from the community partners and that Spain is going "to work intensely so that other States join and we can announce the program" of trips for the elderly.

The details of the program are yet to be defined, but the basis will be "the experience we have in Spain", with trips that help "deseasonalize the offer", with a "program that is successful", which helps to have more volume of tourists in the hotels and to "reinforce the industry" in the low season.

The year of recovery despite uncertainty

Reyes Maroto is confident that 2022 will be "the year of recovery" for the sector, despite the "uncertainty of the war, which generates mistrust in travel." He has recognized that we are living in “a complex moment” in which we must “have the long lights and address”, also, “the changes that the pandemic has generated that has had a very hard impact” on the sector.

The recovery, despite the war, can already be seen in the data. In February, Maroto pointed out, Spain registered “more than 13 million overnight stays”, Of which, more than half, 7.5 million, were from non-residents. “2022 is going to be the year of recovery”, she has summed up.

Optimism but, at the same time, "being realistic", in reference to the war in Ukraine that "can change our parameters because there may be mobility problems due to the closure of airspace in Russia". However, it has minimized the impact in terms of the arrival of tourists of Russian origin.

“We have the best value for money”

The minister also positively assessed the sector's ability to resist the impact of two years of COVID, without having to raise prices. “The pandemic has taught us to value what we have more”, especially in the months when “we have only been able to travel within Spain”.

"We have the best tourism model in the world in terms of value for money, but we have other intangibles such as the quality of the workforce and the beauty of our destinations," he stressed. “It was a risk to come out of the pandemic at low prices and I congratulate the sector because it has maintained them. We are not expensive, we are very competitive”. At the same time, he has stressed, “we have to attract the 'premium' tourist, and that 'you get what you pay for'.

The role of European funds

Reyes Maroto has also highlighted the role that European funds will play in the recovery and that these have to focus on both 'sun and beach' tourism and inland tourism, despite the fact that there are voices in the industry that claim to put the focus on the former.

“There is a demand that we share, which is the reconversion of pioneering tourist destinations. Spain cannot be conceived without a holiday destination, it is our main claim, but we have to add other products, urban, nature or rural that also have to benefit from the funds”, above all, he points out, the emptied Spain.

In 2021, for example, European funds for the sector reached 900 million euros. “We are not conformists, investments must be promoted”, Maroto stressed. "Hotels are being built, increasing investments in tourism, so that it is a fair reactivation, from the territorial point of view" and sustained, also, over time.

The impact of prices

The person in charge of the Tourism portfolio has recognized that the sector is no stranger and is suffering from the escalation of prices, above all, for energy and fuel. "We have different scenarios to respond to the price increase, which is having an impact on families and companies," she explained.

Some scenarios that have to be analyzed in the European Council that begins this Thursday, to give "a response from Europe, which gives us legal certainty to adopt the measures."

"In the previous financial crisis, the European response was cuts and austerity, now Europe has to rise to the occasion to face the impact of the war." And, if that common response does not arrive, the Executive will act. "If Spain has to intervene, because a consensus is not reached, there is no doubt that we are going to do it." "We want the support of Europe to come out stronger" and give "a unanimous response" to the effects caused by the war in Ukraine.