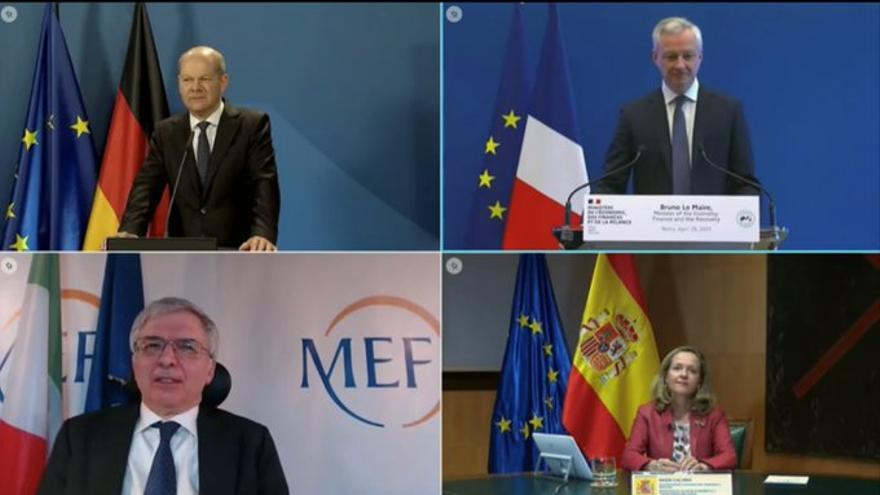 Spain, Italy, France and Germany, the four main economies of the European Union. The countries that bring together more than half of the community population, have jointly presented this Wednesday the master lines of their reform plans, which must reach Brussels before the end of the week. And the four finance ministers have insisted on a message to the European Commission: to speed up the deadlines so that the money can start circulating before the end of the summer.

"National plans are being sent to the European Commission," said the Spanish economic vice president, Nadia Calviño, "and this will start the process of implementing this ambitious investment and reform program throughout the EU to mitigate the impact of the crisis. health in the short term, to support a structural transformation of our economy and make our societies more resilient, more sustainable, inclusive and fair in the long term. "

Of the 750,000 million euros of the EU recovery fund, 140,000 million are for Spain, half in transfers and the other half in loans. "Spain presents an ambitious plan to mobilize 140,000 million in public investment to undertake ambitious and transformative reforms in order to guarantee that our country can be one of the engines of European recovery. The Spanish recovery plan is based on the four transversal pillars: green transition, digital transformation, social and territorial cohesion and gender equality, dedicating almost 40% of investment to the green transition, 30% to digital transformation, 10% to education and 7% to R&D D ".

And Calviño added: "" Time is of the essence, as other colleagues have already said, and the rapid approval of the plans will be key so that our actions at the national level continue to have an impact and reinforce those of our neighbors to give our citizens hope. and confidence in the future after such a difficult period and to confirm once again that we are stronger when we act together. "

German Finance Minister Olaf Scholz, for his part, has defined the European recovery plan as an exercise in "solidarity to fight the unprecedented crisis of the coronavirus and build a bridge to the carbon-neutral future."

"In recent months," said Scholz, "France, Italy, Spain and Germany have worked very hard to prepare our ambitious investment and reform packages. It is good news for Europe that the big four, which represent more than 250 Millions of Europeans, together present their national recovery and resilience to the EU Commission this week. Together with France, Germany, Italy and Spain, I call on all Member States to present their recovery plans and ratify the own resources decision as as soon as possible. All member states and the European Commission must work hard to quickly implement our investment and reform packages. "

Indeed, once the German Constitutional Court lifted the blockade on the processing of the own resources order by the German Parliament (which allows the European Commission to issue debt to finance the 750,000 million of the recovery plan), there are 9 countries pending ratification. Of these, the concerns are in Poland and Finland, with problems in the governing coalitions, and in Hungary, where it is intended to further undermine the link between compliance with the rule of law and European money.

In parallel, the European Commission, which cannot issue debt until the completion of national ratifications, has up to two months to review national plans before the Council (the governments) have an additional month. Therefore, the horizon is the end of July for the money to start arriving.

French Finance Minister Bruno Le Maire has compared the current crisis to that experienced a hundred years ago: "Our citizens expect to be protected from the impact of the worst crisis since 1929. They are also expecting more growth, more prosperity, more jobs. These are the objectives of the European recovery plan. "

"With the European recovery plan, we are major projects in key technologies such as hydrogen, cloud, electronics and telecommunications, artificial intelligence and batteries," said the French: "In fact, our goal is to strengthen innovation throughout Europe, to be more independent. It is also key to design the technology that allows us to fight efficiently against climate change. "

And he has also urged Brussels and the rest of the countries: "Therefore, we are asking the Member States to present the recovery and resilience plans and ratify the own resources decision as soon as possible. This is vital for the European Union raise funds and start disbursing the first year of the European recovery plan.In addition, we also ask the European Commission to evaluate the plans without delay so that they can be approved by the Council [los gobiernos] in July at the latest. This will allow the money to flow in before the end of the summer. "

Italian Minister Daniele Franco, for his part, has defended that European funds will contribute "to repair the economic and social damage of the pandemic; build more dynamic economies while ensuring inclusion; and launch a substantial green transition to address the climate change".