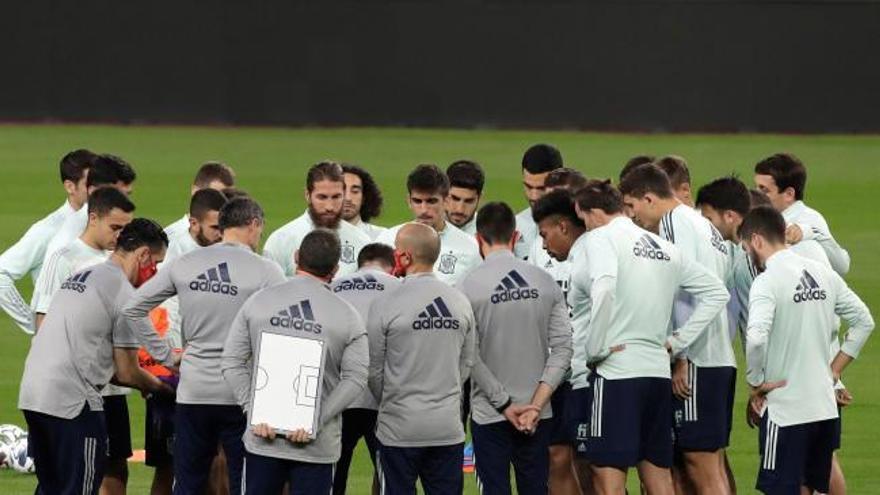 The Spain-Germany on Tuesday at the La Cartuja stadium in Seville, in the sixth and last day of group 4 of the League of Nations, it has become a true final, since the two teams that can access the first place of the group are mentioned and with it the only place that gives the right to play the final phase of the tournament.

The Teutonic team did their homework last Saturday by beating Ukraine 3-1 with a double from Timo Werner and a goal from Leroy Sané and now leads the group with nine points, one more than the Spanish selection, which did not go beyond the draw in Basel against Switzerland (1-1).

Joachim Löw’s men are worth a draw in Seville and Luis Enrique’s are bound to victory, but in any case both formations depend on your result and not from third parties to be among the four chosen for the final phase.

Luis Enrique did not achieve the goal of entering that phase in the first edition of the League of Nations and now he hopes to achieve it in the second attempt with a selection immersed in a generational change, without having defined an ‘eleven’ type and that shows a good attitude but little power to score goals.

Now he meets again with a rival who has fulfilled, together with Spain, his condition of being favorite to pass and who has not lost to the Red since the semifinal of the World Cup in South Africa in 2010, since then they met another three times with a German trump in a friendly in Vigo (0-1), an even (1-1) in another friendly played in Düsseldorf and the draw (1-1) last September in Stuttgart in this phase of the Nations League.

Luis Enrique had in this new window for the national teams a rehearsal last Wednesday against the Netherlands (1-1) at the Johan Cruyff Arena in Amsterdam, where the Asturian coach used many players who will probably not be there on Tuesday in the initial team.

On Saturday, against Switzerland, some of their heavyweights returned to the team, although the succession of injuries has not stopped since the squad list was made public, of which At the first change, Sevilla’s right-back Jesús Navas and Barcelona’s Ansu Fati fell, both injured with their teams on the previous day of The league.

Later, in Amsterdam, left-back José Luis Gayá suffered a blow to the head and, although he is still in concentration, Luis Enrique quoted Getafe player Marc Cucurella, As before, he called Arsenal footballer Héctor Bellerín and Madrid player Marco Asensio for Navas and Ansu Fati.

To this has been added the injury of the Barcelona player Sergio Busquets, who received a blow against Switzerland that sprained a ligament in his left knee, making him low against Germany.

With the unknown of the goal and if David De Gea will return to it after Unai Simón was the starter in the previous two games, the defense seems fixed and led by the captain of the team, Sergio Ramos, protagonist last Saturday in Basel after missing two penalties.

The absence of Busquets theoretically gives way to Rodri Hernández or even athletic Koke Resurrection, who had a good performance in Amsterdam, like the Betic Sergio Canales, the former also of the Verdiblanco team Fabián Ruiz and the realist Mike Merino, while the search for the desired goal would be in the forward of Juventus Álvaro Morata and in that of Villarreal Gerard Moreno, who came out in the second half against Switzerland.

Germany comes to the duel against Spain with the possibility of reinforcing the renewal process promoted by coach Joachim Löw and that It has not only found advocates but also critics.

The decision to dispense with three world champions as Thomas Müller, Jerome Boateng and Mats Hummmels -the three lately in good shape- is permanently reminded of any setback.

Löw, and the leadership of the German Football Association (DFB), however continue to defend that decision. “We can already see results. Since March 2019, when the renovation began, the results are respectable despite all the bad doomsayers”said DFB sporting director Oliver Bierhoff.

“In qualifying for the European Championship we won the group ahead of the Netherlands. In 15 games there has been only one loss to five draws and nine wins“he added.

In the League of Nations, Germany has been accumulating draws, two against Switzerland and one against Spain, to which he added the two victories against Ukraine that have allowed him to lead the group.

The last match against Ukraine and the match against Spain in La Cartuja are the key matches to judge the Löw process, which has declared that the experiments phase is over and that a phase of consolidating the team that will play the Eurocup has begun.

Therefore, it is to be expected that tomorrow he will turn to a large part of the team that defeated Ukraine on Saturday. The defender Antonio Rüdiger, sanctioned for accumulating yellow cards, will not be there. Instead, Löw has the return of Real Madrid player Toni Kroos, after serving his penalty for the same reason.

A quite possible variant is that Robin Koch, who played as a midfielder against Ukraine, falls back to defense and have Kroos play in his usual position next to Leon Goretzka and Ilkay Gündogan.

However, the problems that Germany have had have been primarily defensive and it cannot be ruled out that Löw opts to sacrifice Gündogan or Goretzka to leave Koch ahead of defense, to seek more stability.

Also, although less likely, you could choose to sacrifice one of his three forwards and for Goretzka to play a little ahead.