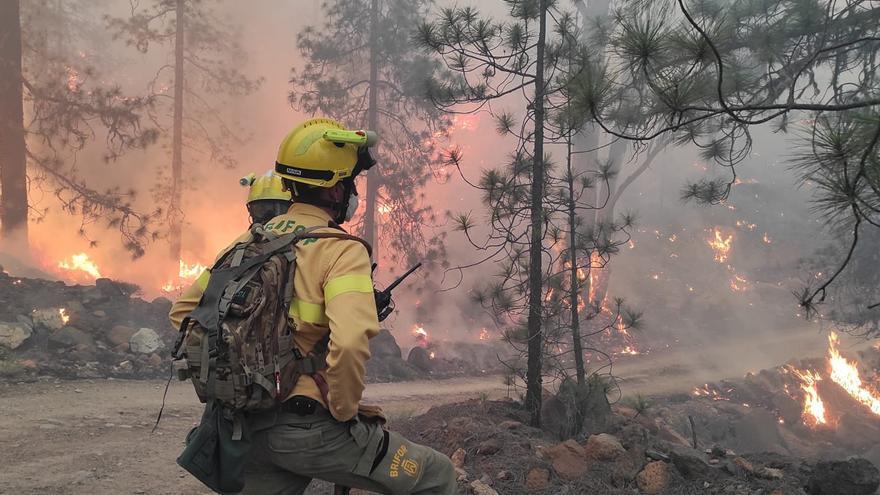 This Tuesday the season of maximum risk of forest fires in Spain has officially started, which runs until October 15. And the weather conditions are not promising: temperatures higher than normal and usual rainfall, that is, scarce, according to has foreseen the State Meteorological Agency.

So far, 18,200 hectares (ha) have been burned in 2,800 fires across the country, according to statistics from the Ministry of Ecological Transition. Both data are below the average for the decade at this point, although data for the Principality of Asturias, whose most incendiary time is precisely winter, is lacking. However, the six large fires of more than 500 hectares between January and May are double the ten-year average.

“We are particularly concerned about the increase in these large fires that we have been insisting on for a long time, since they are the ones that most affect the environment and, being a very small proportion of the incidents, they account for 40% of everything burned”, reflects WWF restoration coordinator Diana Colomina.

One of those big fires in this first half of the year destroyed more than 2,800 hectares in the island of Tenerife, where it reached lands of the Teide National Park. The point is that, despite the fact that fewer fires are registered – the average for this decade has fallen by 37% compared to the previous one – large fires have multiplied their devastation: they are barely 0.18% and burn very little less than everyone else together.

The reality shown by these data is aligned with the studies of impacts attributable to global warming, both planetary and those planned for Spain. The study of impacts and risks derived from climate change 2021 of the Ministry of Ecological Transition explains that “it will facilitate the predisposition of the fuel to burn”, which results in “a greater risk of ignition equal to negligence and accidents caused by the hand of the human being”. And he concludes that, despite the uncertainties, “it is clear that the danger of forest fires caused by the climate increases with climate change throughout the Mediterranean.”

The Spanish mountains are more vulnerable to these large fires. The meteorological conditions derived from the climatic crisis, the rural abandonment and the proliferation of houses in transition zones between the forest and urban centers they favor the spread of almost uncontrollable flames.

For June, July and August 2021, the State Meteorological Agency has calculated that “it is most likely” that temperatures will be above the reference average (the average for the period 1980-2010) and that this situation will occur in the entire peninsula and archipelagos except the northwestern corner. As for the rains, the greater probability is that they will be normal months and, therefore, dry.

“The state of vulnerability of the field and the meteorological conditions can create a very dangerous cocktail”, finishes Colomina. This forestry engineer adds the predictable boom of outdoor activities expected this summer: “After the COVID-19 stoppage, a strong return of human activities in the field is expected that will also multiply the danger. risk such as barbecues, using machinery, throwing cigarette butts … “. This recommendation may seem obvious, but there are regulations that supports barbecues in recreational areas at the door of a national park in times of maximum risk.

In this sense, Theo Oberhuber, from Ecologistas en Acción, considers that the administrations responsible for natural spaces should carry out capacity studies for each environment: “You have to know how many people can support a specific space, because it is being seen since there is a lot of desire to return to the field and that implies a certain risk. In the case of fires it can be an aggravating factor, of course “.

After all, more than 90% of all forest fires in Spain are caused by human activities. “In most cases they are negligent,” he explains. the latest Report of the Environmental Prosecutor’s Office. Although he also adds that in “northern Spain there is reference to an increase in fires, generally caused.” And he mentions, as he has repeatedly done for years, the autonomous communities of Cantabria and Asturias due to the intentional burning of the forest to generate pastures.

The Ministry of Ecological Transition has presented its device against fire on Tuesday, which “complements the action that corresponds to the Autonomous Communities by virtue of their powers in Civil Protection and forest management.” The plan includes air assets, mobile units and thousands of troops, including the Military Emergency Unit. Oberhuber puts the accent, precisely, in this aspect: “We miss more coordination in measures that go to the cause of the fire such as offering alternatives – and aid – for the risk practices of certain groups that later lead to an accident and hence a fire”. It refers to the use of machines, the burning of stubble, garbage … “But, in the end, it seems that each administration makes a little war on its own and ends up depending a lot on the means of extinction,” concludes the ecologist.