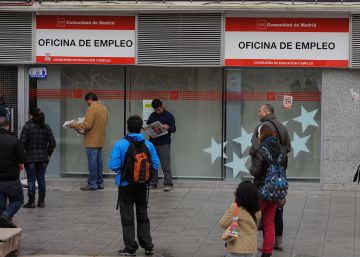 The gradual recovery of activity has provided the best month for employment in Spain, in gross terms, since last July. April has ended with the creation of 134,000 jobs, according to the Social Security affiliation figures published this morning by the Ministry of Inclusion. The system recovers the 19 million affiliates, although the improvement is largely due to conjunctural factors; the average affiliation, discounting the effect of the calendar and seasonal factors, fell by 9,800 people. It was, in fact, April with the least job creation since 2014.

The year-on-year variation, on the other hand, gives positive data insofar as it already includes the step effect of 2020: as the great job destruction suffered in April last year, in the last 12 months Spain has created almost 600,000 jobs job. Membership, yes, is 200,000 people below the pre-pandemic figures. Registered unemployment has fallen by 39,000 people in its second consecutive decline.

The labor market continues, thus, without finishing taking off, after a start of the year marked by the impact of the fourth wave and the restrictions on activity and mobility. In March, the Social Security registered a drop of 45,000 affiliates in the seasonally adjusted rate, plus another 30,000 in February. The period from January to March ended with the loss of 137,500 jobs, according to the EPA, which returned with two quarters of job creation.

The departure of workers from job suspensions is also slowly evolving. The number of workers subject to ERTE fell by 36,621 people in April, thanks to the lifting of some restrictions. There are currently 638,238 people on temporary suspension of employment, of which half are employed in hospitality: 200,000 in bars and restaurants and 100,000 in accommodation, according to the CNAE classification). In 12 months, almost three million workers have been recovered, given that April 2020 was the peak of the pandemic.

Of the workers in ERTE at the end of April, more than two thirds, 443,000, are in total suspension of activity (that is, they are not going to work) and the remaining 195,000, in partial suspension. The number of companies with open ERTE is 13,500.

The hospitality industry, however, is the sector that creates the most employment in absolute terms in March, with more than 40,000 new members, growth that fits in with the slow recovery of one of the sectors most affected by restrictions, and the most intensive in employment : in 12 months it has lost 80,000 affiliates, 7% of the total, to which are added the 300,000 employees at ERTE. It also improves affiliation in commerce, by about 10,000 people, a figure similar to that of construction.

All the main sectors of activity, in fact, register increases in employment in absolute terms, including 12,000 more employees in the agrarian regime. The industry increases membership by 6,600 people.

The improvement in employment has reached all the communities and practically all the provinces. The highest increases correspond to Andalusia, with 30,000 more affiliates partly thanks to the strawberry campaign (Huelva creates 17,000 jobs in a month, 7.3% more), Madrid and Catalonia, with 21,000 new affiliates each. However, the fastest growth is registered in the Balearic Islands, where Easter and the timid arrival of foreign tourists have increased employment by 11,500 people, 2.75%.

Contrast the situation with the Canary Islands, which still suffers from the absence of foreign tourists and where employment has stagnated, growing only 0.16%. It is the community that grows the least, and Las Palmas, one of the few provinces that registered drops in employment in the month.