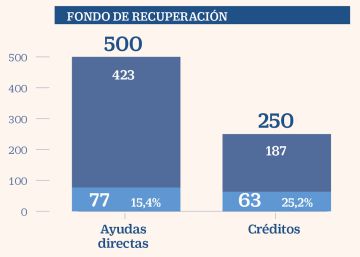 The European Comission yesterday bet on launching a kind of Unprecedented Marshall Plan, provided with 750,000 million euros, to try to assist the battered community economy in the face of the effects of Covid-19 coronavirus pandemic. In the absence of specifying details and counterparts of the plan, the Spanish Government “positively” valued the design of a mechanism made up mainly of transfers of direct aid and, to a lesser extent, credits to be repaid, which could contribute up to 140,000 million to the country. If you add to this fund the 540,000 million already mobilized at first by the EU, of which Spain could get another 40,000 million, the community response could boost Spanish firepower by 180,000 million, 14% of all aid.

In the case of the fund, the majority of the $ 750 billion ($ 500 billion) will be distributed to partners in the form of direct grants, with the remaining $ 250 billion in the form of loans to be repaid. If the partners approve it, Spain would receive 15% of the first amount, 77,000 million that would not have to be repaid, and another 63,000 million in loans (25% of the total). Between both legs of the fund, the country would tie 140,000 million to act in the medium and long term, the equivalent of 11% of its GDP and 18% of the European fund.

To this amount should be added the potential amounts of the first aid package approved on April 9 as an immediate short-term response, representing a joint mobilization of 540 billion for the entire EU. This package, unlike the one proposed yesterday by the Community Executive, is already closed and validated by the partners, so its small print is more extensive.

The greatest weight is carried by the ESM, the European rescue fund, with a power of 240,000 million. Each member state can request the equivalent of 2% of its GDP, a figure that in the Spanish case is around 24.9 billion euros. To the ESM would be added the items of Sure, the fund to pay for ERTE and similar mechanisms from other countries. Sure will mobilize 100,000 million that will be distributed among the partners according to their needs, on the condition that the three countries that agglutinate the most do not total together more than 60,000 euros. According to government estimates, Spain can aspire to add other packages to this package. 15,000 million. In total, between one and other grants, it amounts to 180,000 million.

After the ESM and Sure, the European Investment Bank (EIB) is the third leg of aid in the first package. The EIB, with a mobilization of up to 200,000 million after a partner guarantee of 25,000 million, will distribute its funds among the community business network, with the focus on SMEs. As of today it is unknown what the distribution of these amounts will be, but sources of the entity estimate that Spain, due to the weight that small and medium-sized companies represent in its economy, could benefit from this fund more than any partner.

These 180,000 million represent the potential that Spain can draw on. However, everything indicates that the final amount of aid that the country uses is lower. In the absence of what happens with the reconstruction fund proposed by the Commission and, above all, with the conditionality of its loans, the Government has already confirmed on several occasions that, at least for now, it does not plan to resort to the almost 25,000 millions of the ESM. The stigma attached to the fund, linked to the bailouts and years of austerity, makes many partners reluctant to use it, even knowing that its launch would represent significant savings for members. The ESM calculates, for example, that Spain could save up to 2 billion in interest.

Spain has already allocated 138,900 million to respond to the pandemic

At the moment, what seems clear is that, in order to prosper, the Government will take advantage of “the maximum possible transfers” of the new fundAccording to the Government spokeswoman, María Jesús Montero, advanced on Tuesday. A mechanism that the Vice President of Economic Affairs, Nadia Calviño, celebrated yesterday because it will allow “investing in the recovery of Spain” in order to “return to the path of growth as soon as possible”, with financing that “for the first time is proposed” that comes from “the issuance of community debt”.

In the absence of seeing how much money Spain requests from the EU, it is convenient to put the figures in context. It must be taken into account, for example, that the 15,000 million of funds for Sure’s employment programs barely cover two months of the extra cost of unemployment and ERTE benefits that the crisis is causing. However, the effort is not negligible. Only the distribution of the new fund would allow Spain to cover the 138.9 billion that it has mobilized since March your plan of clash between health, social or business support spending.