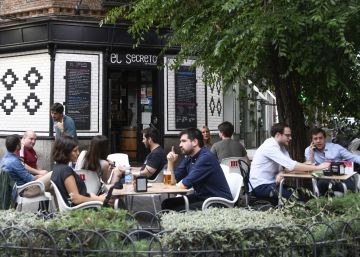 The Spanish hospitality chain chained its fifth consecutive year of growth in 2018, with a turnover of 123.612 million euros, 3.1% more than the previous year, and 1.7 million workers, 4.3% more. However, since the crisis, the sector is immersed in a restructuring that is changing its face gradually. The traditional bar, although it continues to dominate the panorama, yields land and another year, and there are at least eight, losing units, especially in the communities of the Spain emptied. Since 2010, 2,400 bars on average per year are closed, although in 2018 the pace decreased and only 1,123 were closed. Meanwhile, the number of restaurants, larger and absorbing more jobs, grows.

This was highlighted on Tuesday Emilio Gallego, general secretary of Hoteliers of Spain, in the presentation before the media of the Yearbook of the hotel management. According to said yearbook, in 2018 there were 314,311 hotel establishments in Spain, among the 279,396 corresponding to the restoration (bars, restaurants and collectivities) and the 34,915 accommodation (hotels, apartments, rural houses and campsites). They are 4,686 more than the previous year. They grew all the formats, except the most numerous, the one of the bars, that lost 1,123 premises, until remaining in 183,306. It is the lowest figure since the yearbook is prepared, the eighth consecutive annual decline, and assumes that since 2010 there are 19,393 fewer bars in Spain. The consolation is that its turnover grew, even a meager 0.2%, up to 36,289 million euros.

The evolution of the sector, according to Gallego, is due to more demographic than economic factors. "We witness a loss of importance of the bars, they close between 2,000 and 3,000 every year (2,424 on average, exactly). It is a restructuring that is independent of the economic situation," he said. "In addition, the restructuring means that small establishments close, mostly in towns and city belts and open restaurants with a larger average area, more business and more employees, so in general employment and billing grow," has explained.

The evolution of the sector, according to Gallego, is due to more demographic than economic factors. "We witness a loss of importance of the bars, they close between 2,000 and 3,000 every year (2,424 on average, exactly). It is a restructuring that is independent of the economic situation," he said. "In addition, the restructuring means that small establishments close, mostly in towns and city belts and open restaurants with a larger average area, more business and more employees, so in general employment and billing grow," has explained.

The evolution by communities, in addition, "is uneven, with growth in the communities with the greatest tourist demand, such as the Canary Islands or the Balearic Islands, while others, such as La Rioja, Castilla y León and Castilla la Mancha They are in negative. These communities are losing production capacity, they are closing companies. The sector is disappearing in these regions, "said Gallego, who added that the process of closures also affects especially bars" at night "(discos or pubs), for a matter of social habits:" People now know through mobile applications, "he said. Gallego has asked administrations" different and intelligent measures "to reverse this process.

The housing sector, due to the boom tourism, does record sustained growth. In 2018, there were 34,915 establishments in Spain, of which 16,615 were hotels and 15,824 tourist apartments (those registered as such, not those of online platforms), in addition to 1,246 campsites and 1,230 of other types. The census of establishments has been growing steadily since 2010, as was its turnover, which stood at 29,677 million last year, 5.3% more. 86% corresponds to hotels.

Regarding employment, the hotel industry employed an average of 1.7 million workers in 2018, 8.8% of the total employed in the country, with some peaks above 1.8 million. 76% of those employed were dedicated to the restoration, while the accommodation employed the other 24%. The sector has 19.5% of freelancers. At this point, Gallego wanted to reject that it is a sector with precarious employment. "It is a sambenito that hangs on us based on temporality and part-time employment," he said, and has argued that "temporality affects only 60 or 70,000 jobs of 1.7 million" and also exists in the sector, which records activity points in summer. Regarding bias, he said that "people who work part-time in the sector do so completely voluntarily, because they complement it with studies or with other jobs or to reconcile."

For 2019, Hoteliers of Spain expects results "very similar to those of 2018", with a turnover growth of around 3%. Of course, he has warned that both the confidence of businessmen and that of consumers is declining, due to "political instability", expressed especially in the electoral repetition, and the signs of economic slowdown. In any case, Gallego estimates that as long as that slowdown "does not affect employment, consumption in hospitality will not be greatly influenced. That would be our red line," he said.