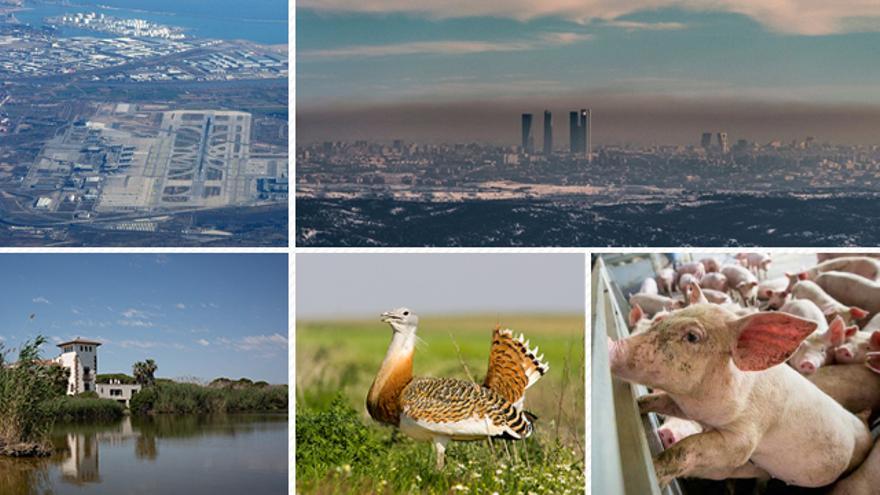 After seven years as leader, Spain is no longer at the top of the European Union's list of environmental offenders. It closed 2021 with 24 active sanction files, six less than the previous year. It is the lowest level since 2007, according to data from the European Commission.

The environmental course had a positive balance in terms of numbers. The European Commission had registered 373 procedures as of December 31, compared to 451 in 2020, a drop of 17%. On this occasion, Greece, with 27 cases, and France, with 25, present worse data than Spain.

Throughout the year, the European Commission opens and closes cases against States on the application of environmental regulations. In the case of Spain, eight files were initiated or advanced to the next phase while another eight were closed when the problem was resolved before reaching trial.

In fact, so far in 2022, Brussels has opened two new cases to Spain on account of the delay in adapting European directives on noise pollution and single-use plastics to national laws. The Government has enough margin to solve them since the community procedure is long and with many opportunities to avoid the judicial Court.

For example, this February 10, the hearing of the European Court of Justice takes place for the complaint that Brussels presented against Spain due to the excess of air pollution in Madrid. This file illustrates how the European sanctioning process works and its long deadlines.

The mayor of the city, José Luis Martínez Almeida (PP) – who also acts as the party's national spokesman – argued last week that this complaint is an inheritance from Manuela Carmena's team since "the file begins in 2018." Actually, the Commission opened the procedure in 2015. He parked it, which did not close, in 2018 when the low emissions zone (ZBE) Madrid Central. And he ended up referring the case to court in 2019 at suspend Martínez Almeida the fines of the ZBE in its initial attempt to dismantle the measure.

The mayor of Madrid travels to Brussels this Wednesday to try to stop the fine, although, on the one hand, the European Commission communicates with the States, not with cities and, on the other, the case is settled in the European Court that has its headquarters in Luxembourg. Madrid has breached the maximum levels of nitrogen dioxide in the air that citizens breathe since they came into force in 2010.

Among the list of sanctioning files that Spain still has pending, there are cases of failures in the management of wastewater, solid waste, protection of ecosystems and even I forget compliance with previous sentences. This is a qualitative look at the Spanish situation.

Last year ended with a new complaint from Brussels. Spain, argues the Commission, has failed to comply with the rule that protects water from contamination based on nitrates produced by agricultural and livestock waste. The decision came a month and a bit before the misrepresentation of an interview with the Minister of Consumer Affairs, Alberto Garzónabout the intensive production of meat, a national controversy arose around the livestock macro-farms and his environmental impact. One of these impacts is nitrate-laden waste.

The Commission analysis about How has Spain managed this type of waste? is: "Spain must still take additional measures to prevent eutrophication throughout the country [derivada del exceso de nitratos que llega al agua] since those implemented so far have failed to achieve the objectives set in the Water directive". That is, the judges will rule on how the action has been to prevent intensive livestock and agricultural industries from contaminating the water.

With the case already on its way to court, the Government has approved this January a decree to try to reduce this contamination, known as diffuse, and "strengthen the protection of the most vulnerable water masses". It remains to be seen if the new norm manages to stop the hearing before the magistrates.

Among all the Spanish offending package, the case of a railway line that began to cross a Special Protection Zone in Andalusia more than a decade ago is striking. A section of High Speed ​​routed within the protected area called Campinas de Sevilla. Spain was denounced in 2010 and condemned in 2016 for not having protected the ecosystem that is home to great bustards and little bustards, birds under special protection. After this, the State reported that it would carry out a series of measures to "compensate" for the damage. The Commission considers that "almost five years after the sentence, Spain has not implemented the measures". So Brussels has asked for explanations before "referring the case back to the judges and requesting financial sanctions."

"The main lesson of this case is that the environmental protection procedure, which should work on paper, in the end, doesn't," analyzes Ana Carricondo, coordinator of Conservation Programs at SEO-Birdlife. Carricondo explains that "transport infrastructures like this receive the classification of special interest, which allows them to be built in protected areas, but the compensations, in the end, are not made because it is the Administration itself that monitors that they are being carried out" .

A third file that, over time, gained relevance is the one related to the delta of the Llobregat river in Barcelona. In February 2021, the European Commission opened a sanction case against Spain to adopt "more protection measures" for the habitat. And he added that it was necessary to "avoid further deterioration of this area of ​​the Natura 2000 Network as a result of the construction of large infrastructures such as the expansion of the El Prat international airport".

It was only a first notice, but, seven months later, the Government and the Generalitat announced that they had agreed on an investment of 1,700 million euros to expand El Prat. "It will be an environmental disaster," said the mayor of that town, Lluís Mijoler, 24 hours later.

At the center of the controversy was the Laguna de The Ricarda, at risk due to the extension of the airport's third runway. La Ricarda is an essential space to prevent the salinization of the Llobregat delta, which the Commission had urged to protect more forcefully.

Finally, at the beginning of September, the internal disagreement in the Catalan coalition government between ERC and Junts made that Aena suspend that project seeing fissures in the support in principle committed by the Generalitat. The file is still active.

If the progress of files can provoke the reaction of national administrations, on many occasions, the sanctioning notices of the European Commission have limited effects. This Wednesday, February 9, the Andalusian Parliament is debating the consideration of a bill to amnesty thousands of hectares of irregularly irrigated farms in the surroundings of the Doñana National Park.

The WWF organization has calculated that the draft regulation would make legal 1,900 hectares now without a license and that between 7 and 9 cubic hectometers of water are used there without a permit. "A third of what can be extracted from the underground aquifer," they have assured.

Brussels explained by letter to Spain last week "deep concern about the repercussions" that could have retouching the planning of the agreed area in 2014. The European Court ruled last year that Spain had not defended Doñana from the massive extraction of water that feeds irrigated agriculture.