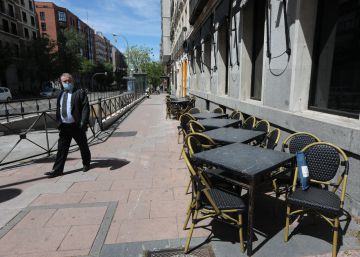 The coronavirus has passed over the Spanish economy like a tsumani, causing the worst quarter in history despite the fact that it has only had an effect in the final stretch of the period. GDP contracted between January and March by 5.2%, the biggest drop in the series and a figure that will mean the country’s recession in June (recession is considered two quarters in a row of GDP decline). Despite the fact that the greatest impact of the Covid-19 came in the last weeks of March (the state of alarm was decreed on March 16), the containment measures have had a devastating impact on consumption: Households have slumped 7.5% over the previous quarter, the largest decline ever recorded.

Investment has also fallen by 5.3%, the worst figure in 11 years, with a 9.6% drop in investment in housing. The public sector has increased spending by 1.8%. Thus, domestic demand has fallen 5.1%. The impact on the foreign market has been even greater: exports have sunk 8.4% quarterly (6.3% over 2019), more affected by the pandemic as international trade began to decline earlier, when the Covid-19 hit China.

But even greater is the effect of the tourist collapse: the expenditure of non-residents in the Spanish territory plunges 18.5% in the quarter and 20% over the previous year. In any case, as imports also drop sharply (8.4% quarterly, 7.4% year-on-year), the effect on the GDP figure of foreign markets is much less than that of domestic demand, and indeed in year-on-year terms provides two positive tenths.

The number of full-time jobs drops 1.9% over the previous quarter, a loss of 357,500 full-time jobs. The measure is different from that of the EPA, which computes the same jobs regardless of the day and which indicates a smaller drop, of 1.4% and 285,600 jobs. ANDn interannual terms, 102,000 full-time jobs have been lost, ending the quarter at 18.14 million, the lowest since the end of 2018.

Added to this is a 3.1% drop in the duration of full-time work. Thus, employment, measured in hours worked, falls 5%. Hours worked have fallen 10% in agriculture – and construction, 6.9% in real estate activities and 6.5% in commerce and hospitality.

The data is equally devastating by branches of activity. Activity in commerce, transport and hospitality fell by 10.6% over the previous quarter, construction by 8.1% and artistic and recreational activities by 11.2%. Overall, the GDP of services fell by 5.6%. Slightly less are the falls in other branches of activity: 1.4% fell agriculture and 2.7% industry.

It is the worst figure in the historical series of GDP, and it doubles the 2.6% registered in the first quarter of 2009, with a collapse of 2.6% that followed the 1.6% registered in the last section of 2008. It is the first contraction since the third quarter of 2013, when the economy contracted 0.1%. Measured in the interannual rate, the variation in GDP stands at -4.1%, compared to 1.8% in the previous quarter.

Worse still are the outlook for the second quarter, currently ongoing. On March 29, the Executive decreed two weeks of “hibernation” of the economy, forcing the closure of all non-essential activities until April 9 (Good Friday). To this is added a Holy Week, the engine of activity and employment, with tourism absolutely canceled. For the year as a whole the IMF expects a fall in GDP of 8% and Funcas, expects a rebound from the third quarter, of 7%.

As it is the first estimate of the national accounts, the data on wages or labor costs have been published with year-on-year variation rates. In any case, they reflect the strong impact of Covid, which initially fell on companies. As the collapse of the economy is greater than the fall in employment, productivity per employee falls 3.6% over the same period in 2019. This causes a 5.8% rise in labor costs. In parallel, the remuneration of employees still grows in interannual terms, by 2.8%, but the operating surplus (company profits) is down by 9.3%.

The data is subject to revision and will be updated on June 30, when the final figures are published. The INE has warned of the difficulty of calibrating the behavior of the economy in such exceptional circumstances, and has modified the calculations “incorporating additional sources available for all the months of the quarter that have complemented those normally used.” Among them, the use of tcredit cards, data from the Tax Agency, Anfac or the IGAE.

Specifically, he explains that, following Eurostat recommendations, he has incorporated in some data series an outlier to “try to model the effect of Covid-19”. In this way, it is possible that subsequent revisions of the GDP will be of greater significance than usual. “When the data for subsequent quarters is available, it will be analyzed whether this impulse has to be modified by another type of intervention.”