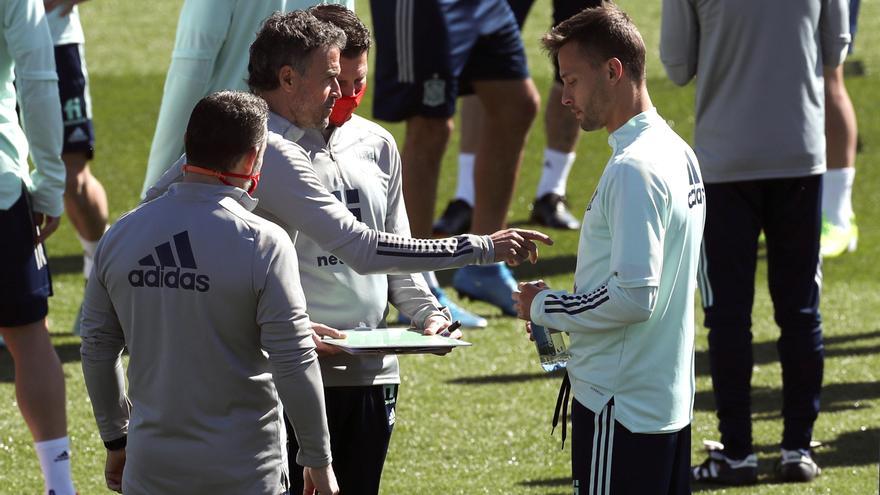 The 18-year-old appearance of Pedro González ‘Pedri’ in the absolute Spanish team, after his waste of personality and football as a starter in Barcelona, ​​is the great attraction of the first step of the Red towards him world 2022, in a duel against Greece in Granada in which Pedro Porro or Bryan Gil can also debut.

Spain returns to the stage after four months of absence, with the aftertaste left by a historic win in its last appearance. That 6-0 to Germany was the confirmation of everything he had in his head Luis Enrique Martinez and that, at times, did not give the expected result. The brilliantly sealed pass to the final phase of the Europa League and the Eurocup that is already looming on the horizon, turn the first three that Spain suddenly faces, heading to Qatar, into strange clashes.

The matches against Greece, Georgia and Kosovo, All of them teams from several levels lower than that of Spain, which has its direct rival in Group B in Sweden. And this is how Luis Enrique takes it, who revolutionized his call by giving entry to whoever shines insistently in his team, without looking at the date of birth . In the same way, there is a new return of Jordi Alba with 32 years, that Pedri, who has just reached the age of majority, or Bryan Gil, 20 years old, follow in the footsteps of Ansu Fati, the great absence due to injury.

With that mixture of veterancy of the few remaining representatives of the ‘golden generation’ that won everything, the Sergio Ramos, Alba or Sergio Busquets, and the young people who play in the elite as if they were on the street, Spain is presented in Granada. With the absences due to injury of Dani Carvajal, Sergi Roberto and the fatigue of Jesús Navas that leave the right side an orphan. And the low point of attack of Gerard Moreno, who will not force due to an overload.

Luis Enrique should give a more twist to the goal of the goal. After ruling out Kepa due to the lack of minutes at Chelsea and surprising everyone with the call of Robert Sánchez from Brighton. After hand over ownership to Unai Simón and relegate David de Gea to the bench. Between the two is the fight for ownership in the last official matches before the European Championship.

In defense the options to the right back go through the debut of Pedro Porro, that when he thought he would be in the European with the sub’21 he can go on to debut with the absolute, or locate Marcos Llorente in a demarcation that is not his natural but where he sometimes has to sacrifice himself in the Atlético de Madrid. The loss due to injury of Pau Torres in the center of the rear again opens the tests to find a partner to the fireproof Sergio Ramos. Íñigo Martínez leaves with an advantage due to the lack of minutes of Eric García at Manchester City after deciding not to renew his contract.

The command of the game will be regained by Thiago Alcántara, after missing the last calls due to injury, and Pedri’s irruption is expected with maximum expectation. Fleeing football comparisons with Andrés Iniesta but finding similarities in his humility and the calm with which he expresses himself on the field. In attack Dani Olmo and Ferrán Torres were Luis Enrique’s bets in the last matches and Mikel Oyarzabal is the favorite to be 9 ahead of Álvaro Morata.

Spain has not lost the first match of a qualifying phase for a World Cup for 28 years, since it fell at the Parken in Copenhagen on March 31, 1993. And its examination will be a Greece that dreams of giving the bell with a group full of new faces.

“Starting with a team like Spain and away from home is a challenge for us. It is a match in which we will measure our strength and show in Europe that we can play against any rival,” said their coach, the Dutchman. John Van’t Schip. “It will be a difficult game, but in football anything is possible.”

After failing to qualify for the Euro Cup postponed due to the pandemic, Greece’s goal is to reach the 2022 World Cup. For its premiere, it has the condition of not having two of its most important players due to injuries. 24-year-old defender Pantelis Hatzidiakos with a knee injury with AZ Alkmaaar, which will keep you two months off; and Norwich left-back Dimitris Giannoulis, who suffered a severe blow to the head last week and will miss the match by protocol.

The full-back will join the national team after the match against Spain. Van’t Schip as Luis Enrique, has rejuvenated his block with the call the young Tasos Douvikas and Costas Mavropanos, aspiring to debut, and the return of Kyriakos Papadopoulos, Thanasis Androutsos and Stefanos Kapinos.

In his last matches, the helena team drew against Slovenia and beat Moldova in the League of Nations. Spain’s last duel against Greece came at the beginning of its dominance of Europe and later the world, in the match that closed the first phase of the Eurocup 2008. With the round pass stamped, Luis Aragones He distributed minutes in his internationals, who beat 2-1 in Salzburg with a comeback thanks to goals from Rubén de la Red and Dani Guiza.