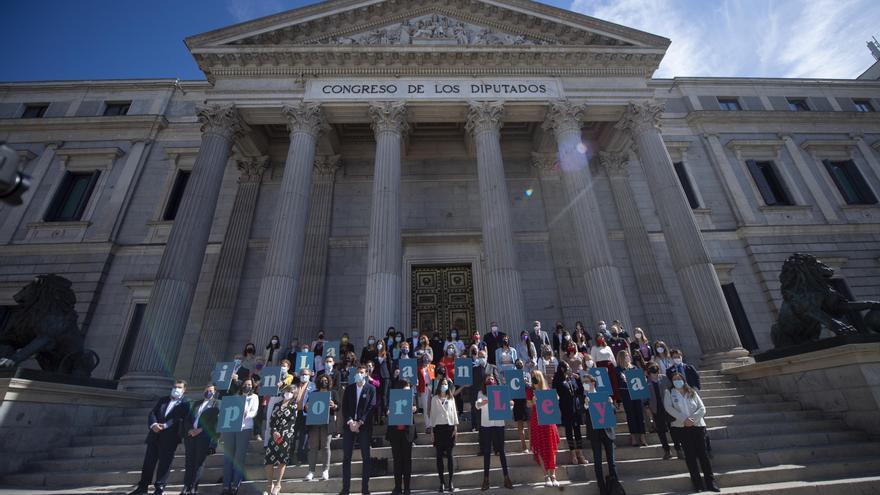 The first law in Spain that protects children and adolescents from violence and sexual abuse has passed its last step. The norm has garnered a comfortable majority in Congress, unprecedented in these times and even higher than that of the first round after passing through the Senate, where some differences have been polished. And finally up to 297 deputies have voted in favor, none have abstained and only the extreme right of Vox has voted against and has been left alone in its attack against a legislation that generates a broad consensus and that the UN asked Spain already ago. decade. The Organic Law for the Protection of Children and Adolescents against Violence deploys a comprehensive framework of measures in various areas that makes our country a pioneer in tackling a hidden and silenced problem.

"This is a fundamental milestone in our country because for the first time the protection of children and adolescents against all forms of violence is being comprehensively regulated. I believe that the greatest success of this law is to send Spanish society a clear and unequivocal message: any form of violence against them is not acceptable in a state that is considered dignified, "said the Minister of Social Rights and Agenda 2030, Ione Belarra, who has intervened to defend the Government's position, that It was also represented on the bench by the Minister of Equality, Irene Montero.

There are hardly any figures that accurately portray it, and that is precisely a loophole that seeks to reverse the norm, but estimates suggest that one in four minors has suffered violence at home, according to Save the Children; while every three hours a complaint is filed for sexual abuse against a child or adolescent. And that is only what reaches the courts and a part of the physical and psychological attacks they suffer. "The main success of this law must be the promotion of a cultural change that provokes a unanimous rejection by all citizens of all types of violence against children," Belarra continued.

With the call Rodhes law, in homage to the impulse given by the pianist James Rodhes, who suffered sexual abuse in his childhood, Spain intends to advance in a cultural change that promotes good treatment and puts violence against children in the forefront, something similar to what that happened with the Comprehensive Law on Gender Violence of 2004. The regulation has been conceived as a priority and has been processed through the chambers of urgency, but the work in the respective commissions has been intense and has introduced important issues, since the text started with harsh criticism from feminist and children's organizations. Of the more than 600 amendments presented, a little more than 200 have ended up being incorporated, along with 76 transactional ones.

More support than a month ago

All groups, except Vox, have highlighted the step forward that the norm supposes, "a new paradigm", highlighted the deputy of United We Can, Lucía Muñoz; "a real milestone", in the words of the PSOE deputy, Omar Anguita, who "tackles and responds comprehensively to the task of awareness, prevention and intervention, putting us at the head of the countries with regulations against this violence." Among the measures is the extension of the statute of limitations for sexual crimes, which will begin to count when the victims are 35 years old and not 18 as is happening now; the generalization of pre-constituted evidence in judicial proceedings so that minors under the age of 14 do not have to reiterate their testimony over and over again or the shielding of their right to be heard in proceedings that affect them. It also deploys a string of awareness measures and obliges educational, sports and leisure centers to have specific protocols.

Highlighted by many of the deputies have been the amendments incorporated in the Senate, among them the prohibition of mechanical restraint in protection centers - with the exception of the restraint of the wrists in exceptional cases - or of full nudity or genital examinations of minors who migrate alone as a procedure to determine their age. There have been a few parliamentarians, in fact, who have pointed to the crisis in Ceuta, which is leaving hundreds of minors crammed together, sleeping on the street or brought back hot. "It is a great lack of humanity that today we are approving a law of these characteristics and we are returning hotly children who arrive swimming and exhausted to our borders," said the deputy of ERC María Carvalho Dantas.

The passage of the norm through the Senate has meant that today it leaves Congress with even more support than it garnered a month ago, when it was approved for the first time. And this is so because the nationalist parties have turned the direction of their vote and have gone from the 'no' of the PNV and the abstention of Bildu, JuntsxCat or PDeCAT to the vote in favor after the transactional amendment agreed in extremis to "safeguard" the powers autonomic, the reason why in the first place they were critical. Even so, and although all the formations acknowledge that there has been improvement in recent months, some issues continue to generate discrepancies, as recalled by Mertxe Aizpurua, from Bildu, who has called for more ambition against abuses in the protection centers and has regretted that Social Services are recognized as agents of authority.

The challenge of implementing it

In the field of gender violence, the norm moves towards the prohibition of Parental Alienation Syndrome (PAS), a false "sexist" syndrome, Minister Ione Belarra has said, which is sometimes used in courts to withdraw custody of mothers that they have previously denounced the parents of the minors and that has been discredited by the General Council of the Judiciary itself. It also generally prevents visits by boys and girls with their parents if a protection order for sexist violence has been issued against them, although if the party requests it and the judge encourages it, it may be granted, or it provides as automatic withdrawal of parental authority in murder cases.

The initial works of the law, as recalled by the PP deputy, María de la O Redondo, began in 2017, with the PP Government; and the drafting was carried out by the former socialist minister María Luisa Carcedo, during whose mandate the Council of Ministers approved the draft. Finally, Pablo Iglesias approved it in the second round and sent it to Congress. Redondo has celebrated that the norm "can suppose a before and after for the lives of the boys and girls", but has pointed out the importance of its being implemented, because "without its development and budgetary allocation it will be a joke". Belarra, who spoke at the end of the debate, recalled that the financial report foresees an outlay of 70 million euros to face the challenge of its full implementation. The law is "a first step", highlighted Sara Giménez, from Ciudadanos, in reference to the long task that lies ahead of her ministry and the communities.

Once again, only Vox has used its turn to fix positions to charge against the law, which the deputy María Teresa López has called Herod law. The extreme right has been left alone defending that the norm tries to "change the norms of society to take away the most beautiful gift that life gives us: our children" and has criticized the Government for what it has called "the atrocious invasion" of Ceuta. "Now the battlefield has been brought here so that our children are not ours and appropriate their personality and their desires," said López in line with the interventions of his group in past debates. His argument, the same on other occasions, that the law, of which he has not highlighted any specific measure, supposes "an interference in the family and tries to destroy it."