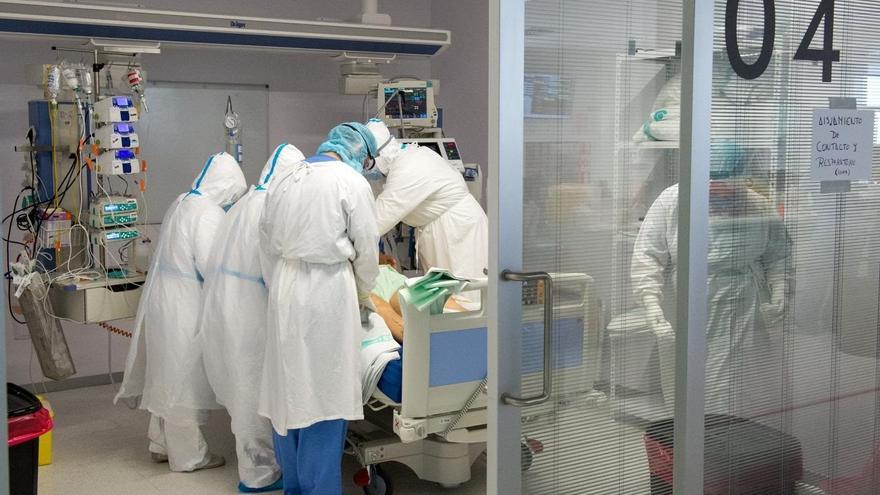 The Ministry of Health has registered 20,986 new cases of coronavirus, of which 7,953 have occurred in the last 24 hours. The community with the most cases nationwide is Catalonia, which has added 4,417 this Thursday (459 of them between yesterday and today). In total, since the beginning of the pandemic, 1,026,281 people confirmed by tests have been infected.

Regarding the deceased, the health authorities have added 155 new ones to the total balance, which brings the victims since March to 34,521. Of these, 570 have died in the last week.

Those hospitalized continue to rise. Currently, there are 14,160 patients in these centers, of which 1,907 have been admitted in the last 24 hours. The community with the most cases is Madrid (3,234), followed by Catalonia (2,663), Andalusia (1,850) and Castilla y León (1,293). The rest of the Spanish regions are below a thousand COVID patients in hospitals and the ones with the least are the autonomous cities of Ceuta and Melilla (28 and 39 respectively) and Cantabria (63). Across the country, the percentage of beds occupied exclusively by coronavirus patients is 11.80%.

COVID patients who need treatment in intensive care units are also increasing: in total, there are already 1,966, which represents an occupation of 21.85% of the beds in ICUs just for this disease. The community with the most cases is Madrid (483), followed by Catalonia (355), Andalusia (239), Castilla y León (157) and the Valencian Community (125). The rest of the areas are below one hundred and the autonomous cities of Ceuta and Melilla only have less than ten (eight and seven respectively).

This Thursday afternoon, The Interterritorial Council of the National Health System has approved the document that establishes thresholds of epidemiological and healthcare incidence for four risk scenarios of COVID-19 and that provides for the state of alarm for the most extreme situations that require restricting mobility. As elDiario.es has learned, it has had the vote in favor of all the communities except the Community of Madrid and Euskadi, which have abstained while waiting for Health to outline the final document, which they usually send at night or The next morning.

Also, this morning, Castilla La Mancha, Castilla y León and the Valencian Community have asked the President of the Government, Pedro Sánchez, to declare a curfew to stop the advance of the virus. Other communities, such as Galicia, do not see it with bad eyes on the condition that its legal coverage is defined and even that it is called something else. Andalusia has independently asked the courts to decree it from eleven at night to six in the morning in the province of Granada. The duration and validity of the night time restriction, however, will be something that will be discussed in the Interterritorial Council that is held this Thursday.

In Navarra, The Superior Court of Justice of the region (TSJN) has endorsed the package of measures included in the regional order signed by the Minister of Health, Santos Induráin, that among other measures, decrees the perimeter confinement of the provincial community and orders the closure of bars and restaurants for 14 days to stop the COVID-19 contagion curve. The TSJN, which has been the first court to rule on the confinement of an entire community, ratifies the decision of the Executive of María Chivite, but at the same time warns that for future decisions, the measures must be presented to the judges for their prior authorization and not for subsequent ratification. That is, they will have to be raised for judicial control prior to its entry into force.

The judges of the TSJN have accepted that by means of Organic Law 3/1986 of April 14, the Government of Navarra has adopted measures that limit the exercise of certain fundamental rights, without the need to resort to a state of alarm, on the contrary of what other courts have issued, such as the Superior Court of Justice of the Basque Country, which This morning the limitation of meetings to six people has been overturned, considering that “only by State Law can limitations to the exercise of fundamental rights be established”.

On the other hand, in Andalusia, the Board will demand a ratification from the Superior Court of Justice (TSJ) of the community to apply restrictive night mobility measures, from eleven at night to six in the morning, in the capital Granada and in thirty municipalities of its metropolitan area, as announced by the Minister of the Presidency and spokesman for the Andalusian Government, Elías Bendodo.

Avoid tax returns scares: do a review before the end of the year | My finances section

Animals will have a voice in the Madrid City Council