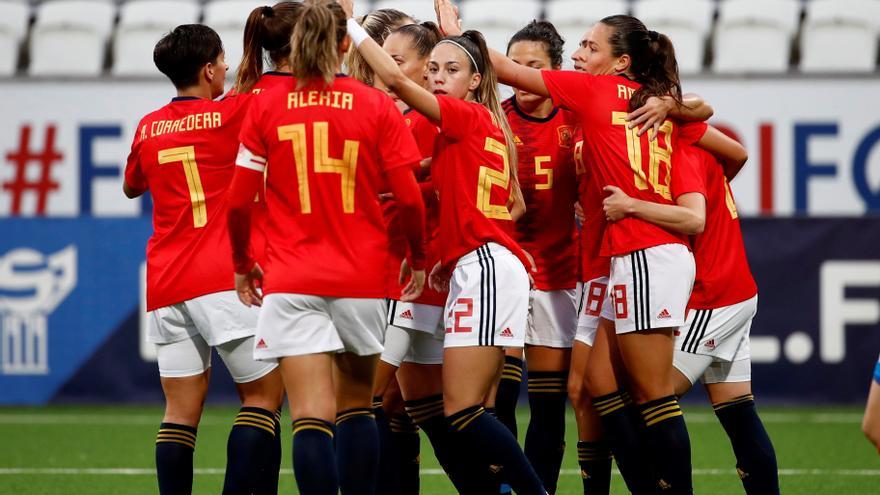 The Spanish women’s team of soccer this Thursday (0-10) overwhelmed the Faroe Islands in his first qualifying match for the 2023 World Cup to be played in Australia and New Zealand.

Jorge Vilda made rotations and put less common players in the starting eleven. He reserved fixed lines such as Sandra Paños, Mapi León and Aitana Bonmatí on the bench ahead of the second World Cup qualifying game next Tuesday against Hungary.

Spain asserted its immense superiority against the Nordic team from the first minute. The Spanish gave great speed to their circulation game and expanded the field with a continuous attack by both the bands that locked the Faroese in their area.

The first big chance was in minute 4, when Alexia Putellas smashed a ball off the crossbar from Mariona Caldentey.

Shortly after, the first goal of the afternoon came with a header from Amaiur Sarriegi, who was playing his second game with Spain, passed by a great Marta Corredera from the right side (min.7).

And in a followed and identical play, the second came with an accurate header from Irene Guerrero to pass from an incisive Ona, this time from the left side (min.8)

In the 24th minute, Amaiur, with a header, converted a Mriona Caldentey pass from the left wing with a changed leg into a goal, but the assistant referee declared it offside.

Alexia was the owner of the middle of the field with deep passes that ended in countless corners. He was also trying with long shots, as happened in the 25th minute, but he left brushing the Faroese right post.

Amaiur was sweet and with a lot of scoring instinct. Proof of this was the second goal on his account when he finished off in the small area a pass from Ona ​​that brushed against Mittfoss center and changed the trajectory for goalkeeper Joensen.

The only approach of the Faroe Islands was in the added time of the first half with a very wide shot from Lisber outside the area to the left of Misa, which added his third caps and hardly had to intervene.

In the second half, Spain took to the field wanting to extend the advantage and get a great win. As a consequence of the physical downturn of the Faroese, the Spanish had less defensive opposition and the goals were falling easily.

The first goal of the second half was in the 50th minute with a low left foot from Alexia Putellas that went to the right side of the Faroese goalkeeper. Five minutes later, Amaiur Sarriegi scored his hat-trick by heading into the net with a fantastic cross from Mariona Caldentey’s left flank.

The first changes arrived in both teams and Jorge Vilda decided to bet on a 3-5-2 with the Basque duo in attack composed of Amaiur Sarriegi and Lucía García.

Shortly after entering the field, Lucía García scored the 0-6 from Amaiur Sarriegi in the small area (min.58). Two minutes later, in the 60th, Amaiur Sarriegi signed his poker for goals by cutting with his left from the corner of the area and finishing with his right leg.

The dominion of Spain was overwhelming in the face of unarmed feroces.

Patri Guijarro headed to pass from Athenea (min.64) and Mariona Caldentey in a personal move (min.70) scored the eighth and ninth goals of the afternoon, respectively.

The tenth and closing to the ecstasy scorer of Spain had the signature of Laia Alexandri with an accurate header after a corner kick by Irene Guerrero (min.95).

Incidents: qualifying match for the 2023 World Cup in Australia and New Zealand played at the Tórsvøllur stadium in Tórshavn (Faroe Islands) with an audience and artificial grass pitch.