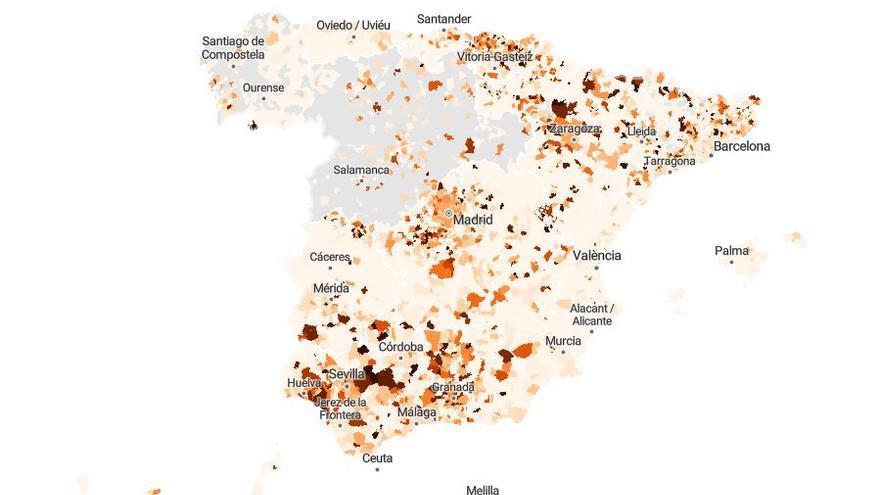 * Information updated with the latest data available as of May 25.

The sharp drop in infections after the rebound in April and the advance in vaccination lead Spain to the best levels of hospital occupancy and mortality since the summer of 2020. Just a month after the start of summer, there is already a Spain that lives at low risk of contagion. Specifically, almost 4,000 municipalities where 27% of the Spanish population lives register incidences below 50 cases per 100,000 inhabitants in 14 days, the limit from which the Health traffic light considers the risk of transmission to be “low” or “very low”.

This favorable situation includes more than thirty large cities located mainly in the Valencian Community, the Canary Islands, the Balearic Islands and Andalusia. The best levels are registered in the municipalities of Santa Lucía de Tirajana (Las Palmas), Telde (Las Palmas), Alcoi (Alicante), San Bartolomé de Tirajana (Las Palmas) and Ceuta, where the incidence is even below 15 cases per 100,000 inhabitants.

Another five Valencian cities complete the ranking of large municipalities with less incidence of infections: Alzira, Elche / Elx, Gandia, Sant Vicent del Raspeigeig and Mislata. These are some of the results extracted from the analysis carried out by elDiario.es based on data from the Health Departments of 17 autonomous communities and the autonomous cities of Ceuta and Melilla. You can read more details about obtaining this data in the methodology.

At the other extreme, there are only seven large cities left with incidents above 250 cases and infections are increasing in two out of ten. Arrecife (Las Palmas) repeats as the city with the highest incidence in all of Spain: it registers 421 cases per 100,000 inhabitants in 14 days and the trend is upward (+ 58% in two weeks). They are followed in the ranking by Santurtzi (Bizkaia), Granada, Manresa (Barcelona), Bilbao (Bizkaia), Huelva and Santa Cruz de Tenerife as the only cities with a very high risk of contagion.

Regarding the trend, confirmed cases of COVID-19 continue to decline 📉 in 1,041 municipalities where 62% of the Spanish population lives (last week it was 67%). They are rising 📈 in less than 432 where 15% of the population lives and they are in the plateau phase (they remain more or less the same as two weeks ago) in 103, where 7.9% live. The rest are very small municipalities where very few cases are registered – less than 5 every two weeks – or for which there is no information available – representing 15% of the Spanish population.