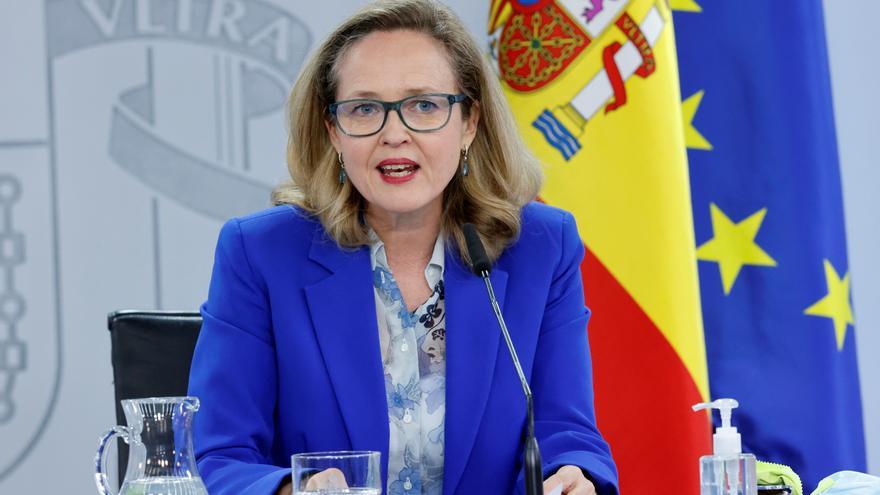 They all glance sideways at Karlsruhe. But, while the German Constitutional Court decides on the legality of the formula to issue 800,000 million of community debt to finance the recovery fund, the governments of the EU and the European Commission itself try to do their duties in parallel. There is no plan B.

Thus, by April 30, all national recovery plans should be sent to Brussels. "We are finishing some fringes to approve it as soon as possible and send it to Brussels," explained the economic vice president, Nadia Calviño, after the Eurogroup meeting and before the start of Ecofin on Friday.

Calviño recalled that Spain has included 27,000 million European funds in its budgets for this year, and that it expects the money to start flowing in the second half of the year. But, for that, the Commission has two months to evaluate the plans, as well as another month for the Council (the Governments), with which, if the deadlines were rushed, not until August, at the very least, there would be no money.

"I am sure that this afternoon, at the Ecofin meeting," said Calviño, "there will be enough Member States that we are going to insist on the urgency and the need for these recovery plans to be approved as soon as possible, because obviously we need that this stimulus is injected into our economy as soon as possible and that as soon as possible we can give a boost that allows us to recover from the fall in both public and private investment. We have no time to lose to ensure that these investments reach the real economy " .

What if the process continues to be delayed by the German Constitutional? "Regarding whether there is a plan B, we are already working in a context in which we have the budgetary framework and a forecast of debt issuance to deploy the recovery plan from 2021. We have a financial framework that allows us to deploy this recovery plan without having to stop it depending on the arrival of European funds. Regarding the calendar and forecasts, the European Commission gives a sign of its confidence at the moment in which it makes public the details of how it is going to deal with this issue of new public debt in the second part of the year ".

"This is not the time to raise taxes"

Regarding the debate on a tax on higher incomes, as the IMF and the Joe Biden Administration are proposing, the economic vice president has insisted: "This is not the time to raise taxes, as has been demonstrated in the General State Budgets Our priority at this time has to be to promote job creation, economic growth and a strong and sustainable recovery. "

"There are no discrepancies within the government," says Calviño: "We all agree on the reform roadmap that we have to tackle jointly with the social agents, who have shown their willingness and a constructive position to tackle these reforms to tackle the imbalances that we have been dragging on for decades: digitization and the proper functioning of the SEPE, youth unemployment, a new labor framework that allows us an economic recovery rich in quality job creation, reducing excessive temporary employment, the excessive rate of structural unemployment, that of the youth unemployment rate, the gender gap ... "

As Calviño explained, "both nationally and internationally, all agencies have been pointing out to Spain the need to address reforms to reduce the excessive temporality, precariousness and duality that has been generated with the current framework. And that happens, among other measures, for the simplification of contracts ".