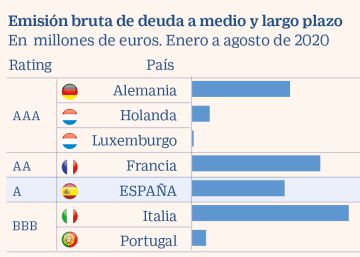 They are the euro countries hardest hit by the economic crisis, those that will end 2020 with the most skyrocketing deficits and those that are rushing to meet the sovereign debt issuance targets set for this year. Spain and Italy have already covered more than 80% of their forecast for medium and long-term gross debt issuance so far this year, a goal that has skyrocketed with the outbreak of the pandemic and the multiplication of public spending.

The ECB has played a key role in this accelerated uptake of resources, since It is on Italian and Spanish sovereign debt that it has most focused its extraordinary purchasing program. And the respective treasures of both countries are responding to that backing with an intense broadcast program. In this way, they will avoid closing the year with difficulties to meet all their financing needs, perhaps even greater than estimated in the face of the second wave of the pandemic.

Italy is by far the euro country that will launch the largest volume of sovereign debt in 2020, a planned total of 315,000 million euros in medium and long-term bonds, of which it has already captured 82.4% of the total, according to data compiled by HSBC. The intensity of its emissions is insurmountable in the euro zone if the volume launched is taken into account. So, Spain has already covered 82.5% of the year’s objective, although the total that it plans to issue in medium and long-term debt is significantly lower than the Italian, of 185,970 million euros.

An unexpected economic crisis, of a magnitude and speed only comparable to that of a military conflict, in March blew up the financing plans of the euro countries, opening a race to raise financing that has so far found the way completely clear. ECB support and investor appetite for sovereign debt in an environment of great uncertainty and volatility are making this possible.

The countries with their most damaged economies are the ones that have launched themselves on the market with the most intensity, and France also stands out among them. The French treasury has already captured 80.1% of the financing needs – in medium and long-term debt – contemplated for the year. A worthy task if you consider that it is the second euro country that is going to borrow the most this year in absolute terms, with a planned gross issue of 265,000 million euros in bonds and obligations.

The calm of the triple A

The euro countries that lag furthest behind in meeting their financing targets for the year are precisely those that are known to be most desired by investors, those with a triple A financial rating. Germany, which in the face of the pandemic has abandoned its fiscal rigor and has launched the first budgets with deficits since 2013, so far this year it has barely captured 66.2% of its forecast of gross issuance in the medium and long term for 2020. Even despite the fact that this year it will carry out the largest debt issuance since the Second World War, for 245,000 million euros in bonds and obligations. An amount only surpassed by Italy and France in the euro zone.

The same happens to the Netherlands and Luxembourg. With very low emission targets, they have covered 72.7% and 71.4% of the financing need forecast for the entire year. Away from the select club with the highest financial rating, Portugal has not been too rushed either and has covered 76.6% of its targets with strong demand in its auctions.

But despite lower emissions intensity, no country in the euro comes to relax. In fact, the month of August has had an unusual activity in placements, far from what is usual. The volume of sovereign debt issues has doubled in August compared to the same month of the previous year, with 78,200 million euros. Germany has had a lot to do with the increase and has used the month to carry out several debt auctions, at terms of 5.7, 10 and 30 years. Spain, on the other hand, has made a single placement of medium and long-term debt in the month.

The financing challenge posed by the increase in public spending due to the pandemic is clearly reflected in the volume of sovereign debt issued by euro countries so far this year. There is very close to a billion euros –986.7 billion euros–, 50% more than what was issued during the first eight months of last year.

One of the great lessons that the euro crisis left was the convenience for the most vulnerable countries of extending the average life of their debt and thus taking pressure off of maturities. Italy, on the other hand, pressed by the huge amount of debt it will issue this year, is reducing the repayment period. In what was placed in bonds and obligations in the year, the average term is 7.86 years, below the 9.24 years of what was issued in 2019. It is the lowest average term in new issues this year among the euro countries, compared to 10.75 years in Spain and 10.08 on average.