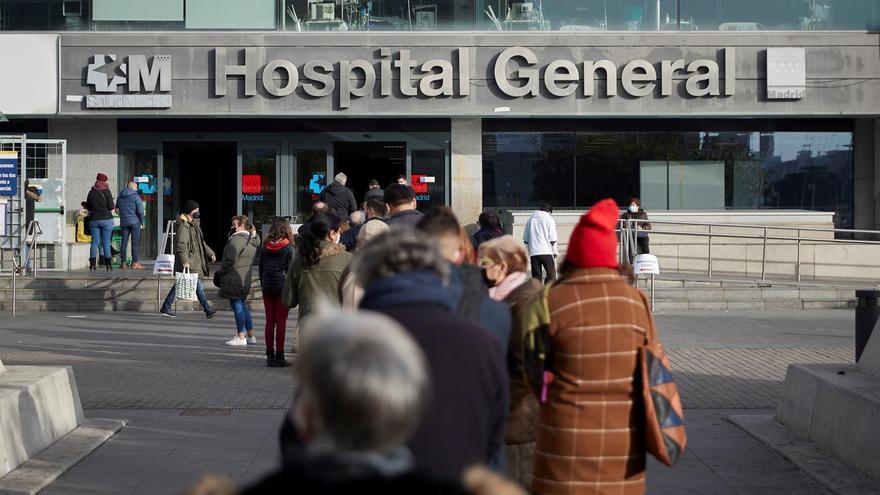 The rate of infections continues to skyrocket in Spain. This Thursday the communities have added 72,912 new positives and the country has registered the third maximum number of consecutive daily infections. The peak of infections is already far from that registered in the third wave, in January of this year, after the Christmas holidays, when more than 44,000 daily positives were reported. It also exceeds that of those recorded during the first wave, although at that time the testing capacity was much lower than now, so the figures are difficult to compare.

By communities, Madrid incorporates the highest number of new infections, with 19,878 and also sets its own record for the third consecutive day. Catalunya, which adds 11,204; Andalusia, which totals 7,744; and the Valencian Community, which totals 5,820; They are the regions most affected by the rise in cases.

The incidence thus continues a continuous escalation since mid-October and now reaches 911.31 chaos per 100,000 inhabitants, after adding 127.11 points in the last day. This indicator is above the data recorded during the fifth wave of the pandemic and is approaching the maximum of the third.

In addition, several communities already exceed 1,000 cases of incidence within 14 days and Navarra, with 1,750, and La Rioja, 1,606, find unpublished numbers to date, already close to the barrier of 2,000 cases. Euskadi, Aragon, Madrid or Murcia also have very high incidence levels.

If these indicators are broken down by age, those over 70 and 80 years of age have significantly lower incidences than those of the rest of the groups, with 278 and 235 cases respectively. It is precisely these age ranges that have the highest percentage of booster doses. The most affected, as in the last waves registered, are young people: among people aged 20 to 29, the incidence rises to 1,429 infections; between those from 30 to 39, to 1,222; and among those under 11 years of age, 1,074.

Another indicator used by the Ministry of Health to assess the severity of the pandemic, the positivity index, is currently at 14.65%.

The Ministry of Health has also reported 82 new deaths, an indicator that remains more stable, despite the rise in infections, and well below the levels of a year ago, when the vaccination campaign had not yet begun. In total, since the beginning of the pandemic there have been 89,019 deaths due to or with coronavirus.

Hospitalizations continue to rise as well, albeit at a moderate rate. The general occupancy of beds goes from 6.20% to 6.40% in Spain, after incorporating just over 200 hospitalized patients. ICU beds are at 16.27% occupancy, with some communities such as Navarra, Euskadi or the Valencian Community above 20%.

20.9% of minors between 5 and 11 years old, the last population group to join the vaccination campaign, already have the first dose of Pfizer's antidote, a total of 700,391 children.

According to the latest report provided by the Ministry of Health, 45.1% of those over 40 years of age already have the booster dose. Last week, the communities and Health approved administering this additional injection for everyone over 40.

The Christmas contagion map: cases double in 4 out of 5 large cities in two weeks

So this sixth wave, which started as the slowest of the pandemic In Spain, it is accelerating at a dizzying pace: this week it left 60,000 new cases in a single day, the highest number of infections reported daily since the start of the epidemic. In the past 14 days, infections have doubled in 4 out of 5 large cities (138 out of 175), a total of 125 cities exceed the barrier of 500 cases of incidence and in 25 of them transmission is uncontrolled, over 1,000. This is the context at the gates of the Christmas Eve and Christmas gatherings.

In the first weeks of this new wave, the communities in the north of the Iberian Peninsula were the most affected, but currently, infections are increasing strongly throughout the territory. Santa Cruz de Tenerife and Huesca are the two cities where the incidence is close to 2,000 cases in 14 days. They are followed by Valladolid, Segovia, Pamplona, ​​San Cristóbal de la Laguna, Irún and Donostia, among others, all of them with incidents of more than 1,200 and with cases growing rapidly.