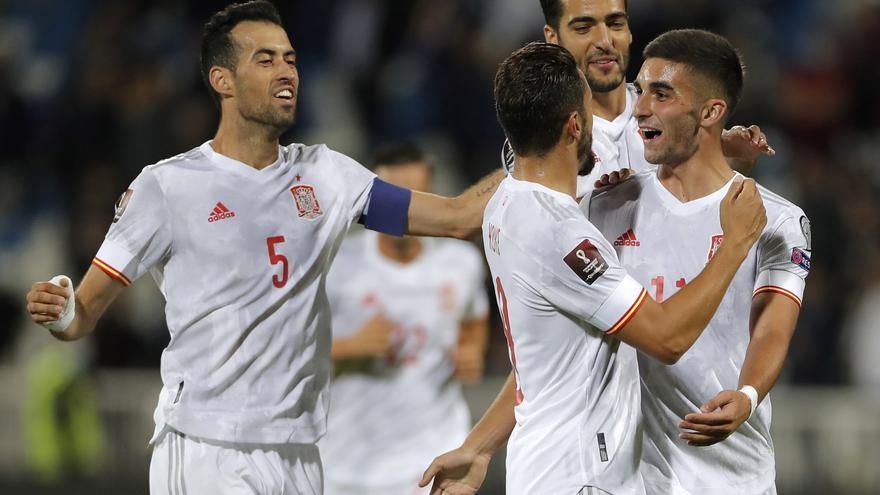 Spain She relies on herself to be in the World Cup 2022, after signing a triumph with large doses of suffering in Kosovo (0-2) for serious defensive errors, but achieving the goal of victory with goals from Pablo Fornals and Ferrán Torres to make good the stumbling of Sweden, who fell in Athens.

Any major rival would have dealt a heavy blow to Spain. Only Kosovo's offensive innocence forgave defensive gifts, serious errors, that in a big tournament they send you home. The insecurity shown in Pristina by the Spanish team is covered by a result and a new reality. Solna's defeat is forgotten. The last two days will decide the direct place to the World Cup and Spain no longer depends on others.

The difficulty of deciphering Luis Enrique is increasing for each match he leads the national team. Never repeat an eleven, even if it works. And the team that said goodbye to the European Championship with honors, new faces keep joining. Up to four of the starting team missed the big event just two months ago. Up to six changes in the eleven. Too many to find continuity in an idea.

That lack of filming causes imbalances in players they have never played together. It happened with the centrals, Laporte and Iñigo Martínez, imprecise at the beginning, with too much distance between them. A disaster in the second act. Added to the push of Kosovo pride, it generated several actions full of uncertainty. Any long ball found room to run. Rashica forgave for poor control the first.

Luis Enrique's tactical drawing featured several surprising bets. The Marcos Llorente's return to the side when the opinion is unanimous, even of the player himself, to settle indoors; Pablo Fornals' surprise on the left wing of the offensive trident. The facts proved the Asturian right, no matter how uncomfortable a midfielder was in the demarcation who does not face or has speed to overflow.

The truth is that he was in the dangerous actions of the first act. Without succeeding in finishing off the first action of merit, when Koke assisted and forgave the shot at nine minutes, or with a soft head ten later. The meeting was not to Luis Enrique's taste. Open, with Kosovo pressing up and Rashani stroking the goal with a left foot close to the post.

Among the continuous name changes there is an untouchable one. It's Ferran Torres and each game shows why. From his impudence was born the step to the front of Spain. Always trying on the right wing. Was when dealt a hard blow Fornals, taking advantage of Morata's movement, to which the two centrals went to the mark, and the forward's pass that he hooked with power at the half turn.

With the advantage on the scoreboard and looking for more, with a foul by Soler that Muric took out as best he could and a header after Morata's corner to the side of the net, one eye was put on Athens waiting for a stumble from Sweden that would change the fate of the group. And he arrived, but he was about to be accompanied by one from Spain, who linked serious defensive errors in a worrisome second half.

The recital began with a bad transfer of head from Laporte that Unai saved with a quick exit against Rashica. The national team wanted control football but their own mistakes made them stagger. Iñigo Martínez on his return caused two occasions that could cost very expensive.

A bad control in the exit phase left Muriqi with the whole field to run and think about how to define in hand-to-hand with the Spanish goalkeeper. He shot to the side of the net. A risky exit by Unai with a bad clearance by Iñigo caused another scare with the shot from the center of the field that saved the goalkeeper.

Luis Enrique had warned of the dangerousness of the game, "the most difficult of the group" in his opinion. What he did not expect is that it was his players who increased the risk. None of his changes modified the panorama, even less with Adama with a changed leg on the far left. The Asturian coach later corrected it, such as Marcos Llorente's demarcation in search of stability behind with Azpilicueta and Albiol.

Just a shot from Morata or a header from Ferran shaped the poor offensive baggage. Suffering was guaranteed. A header from Rashani to the center from the left and a saving hand from Unai, below, glued to the stick, shot by Bytyqi, avoided the tragedy.

With spaces to run, Spain's top scorer appeared in an irregular qualifying phase and sentenced. Ferran, first annulled for offside and later approved by the VAR, gave peace of mind on a nervous night with the best result. Greece did their part and leaves everything in the hands of Spain who will have to improve to finish leader. The visit to Athens and the match against Sweden will be his final exams.

Incidents: Match corresponding to the sixth day of the 2022 World Cup qualification phase, played at the Fadil Vokrri stadium before 1,200 spectators.