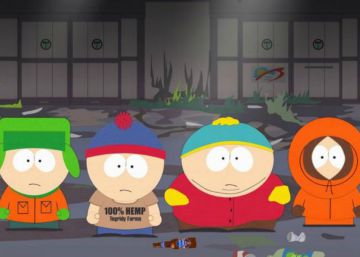 The Simpson It is on its way to premiere its 31st season. It is the reference animation series for its impact on popular culture, for its duration over time and for the number of chapters aired, 662 to date. But always, in the darkest background, has been South Park. The series created by Trey Parker and Matt Stone in 1997 has little to envy the yellow family in many aspects, and more being a fiction designed for adults full of provocations, insults and crazy situations mixed with a clear social conscience. After 22 seasons with almost 300 episodes under its belt, Comedy Central has renewed it for three more installments.

South Park takes hold as well as the longest-running animation series of cable television in the US and the second in all television only behind The Simpson. And therefore, also in one of the series, whether or not drawings, with more episodes in history. The premiere of season 23 will be on September 27 at a time that seems high season for the animated series for adults with the return of several fictions of this genre.

South Park He has survived more than twenty years without giving in his irreverent, black and controversial humor. "People have been talking about canceling us for 22 fucking years," Parker told The Hollywood Reporter when the news of the renovation is known and in a tone very in keeping with how the characters of his fiction speak.

The series is written and recorded the same week the chapter is broadcast. That kind of pressure is with which the couple of creators feel more comfortable, so they have not prepared a special chapter to celebrate episode 300, which will air in October. And so avoid the hassle that was once celebrating the 200 chapters with a story about Muhammad that ended up being canceled by the chain itself (it was only broadcast once and is not available in reps). "We've learned to get carried away by the momentum of the season itself," Parker explained.

Apart from South Park, three new animated series for adults return with new seasons. Movistar Series premieres on Sunday 15 the tenth season of Archer, with a new twist to this story of secret agents. On the 20th on Netflix the second part of Disenchantment, Matt Groening's attempt to get away fromThe Simpson towards more adult territories with a medieval fable of humor, witchcraft and elves. On the same platform, on October 4 comes the third season of Big mouth, a direct and devastating reflection of puberty. And with date to be confirmed by Netflix is ​​the sixth season of the acclaimed Bojack Horseman, whose creator premiered yesterday Unone in Amazon Prime Video.