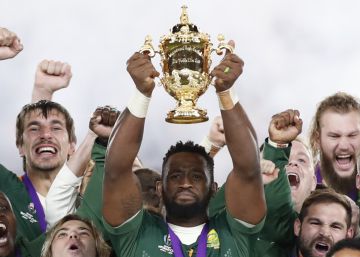 Every 12 years (1995, 2007, 2019), South Africa wins the Rugby World Cup, a sport that reports as few of the rapid social changes that occur in the world. His captain, Siya Kolisi, raised the Cup, as Francois Pienaar and John Smit did before. Unlike them, Kolisi is black. Not long ago, the Springboks represented racist South Africa and were detested by the vast majority of the black and mestizo population. In the famous victory over New Zealand in the 1995 final, only one black player, Chester Williams, participated. In 2007, two lined up. In its overwhelming deployment in the Tokyo final, the African team included six black players.

It is not convenient to draw excessive conclusions from a fact that does stand out for its symbolic content. The new diversity of the Springboks does not explain, by far, the social reality of South Africa, nor its problems, expectations and contradictions. In 1998, France won the Soccer World Cup with a team made up of players from so many backgrounds who talked about the triumph of miscegenation and the integrative capacity of their society. Of course, it was a kind and superficial vision. France remains exposed, in many aspects more acutely, to problems that exceed the limited framework of the sport.

It is also true that sport is a good indicator of social tensions and hypocritical behaviors around it. In the World Cup that was played in 2010, the most uncompromising right accused French players of Maghreb and West Indian origin of lack of patriotism. They were accused of ignoring or not wanting to sing The marsellesa. Simplistic, false and harmful, the speech had a good sale. The reason? France failed in that World Cup. It was very appetizing for the most intolerant sectors to attribute the disaster to immigrants and to policies of inclusion and tolerance.

Spain is no stranger to this class of derivatives. The victory in the 2010 World Cup was interpreted as the splendid fit between cohesion and diversity. One million people witnessed in Madrid the celebration of the selection's success. No player missed the appointment. There was genuine enthusiasm in all of them, in a team with a large representation of Catalan players and a large majority of Barça players. Months later, Vicente del Bosque crossed an ordeal to maintain the harmony of the group, largely shattered from the outside by the occasional toxic character. The Spanish team won the 2012 European Championship, but the effect of the deterioration still remains: heroes of that time became suspects now.

The success of South Africa in the Rugby World Cup it moves more than the idea of ​​a country and a different team. It is a different world and sport. Two generations of European fans met a white rugby, with no other news from the southern hemisphere than fame and tours, not televised in Spain, of the All Blacks, Wallabies, Sprinboks and Pumas. He was an amateur rugby, compartmentalized, magnificent, no doubt, but reduced by the circumstances of his time.

Few sports have better understood the sign of the times. Rugby has taken advantage of all the favorable conditions that have made its World Cup the third sporting event with the most global audience. He has professionalized, he has taken advantage of new media technologies to multiply their dissemination, he has broken local barriers and he has definitely transformed the landscapes of national teams, where diversity has replaced ethnic and social monochromy. From this perspective, the success of rugby is incontestable. Nothing explains it better than the image of Captain Kolisi raising the Champion Cup.