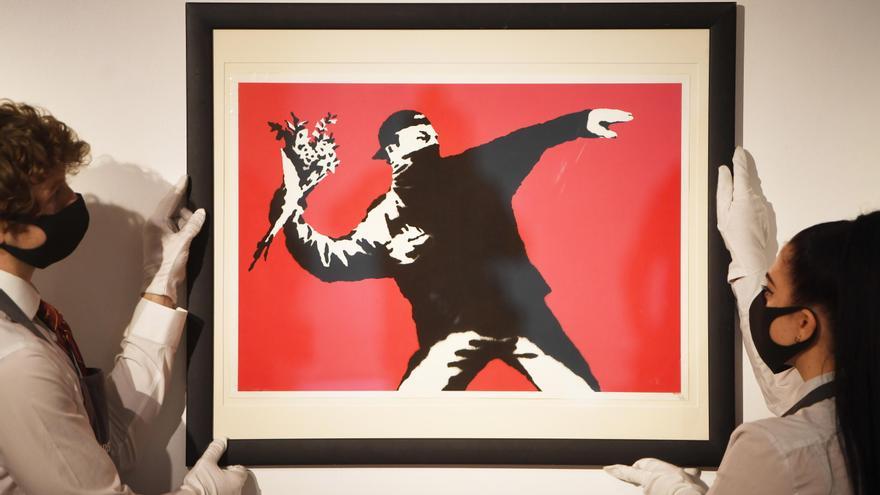 New York, May 4 (EFE) .- Sotheby's announced on Tuesday that it will accept the cryptocurrencies Bitcoin and Ether in the sale of a piece by British artist Banksy, "Love is in the Air", the first time that an art auction house supports these types of payments.

According to Sotheby's, by offering the novel use of these coins, whose use has not yet reached the general public, it is about honoring the legacy of Banksy, who frequently shakes the art world with his graffiti of political and social commentary and to whom the company he has described as "one of the most famous and provocative artists of the 21st century"

The auction house, which will use the Coinbase cryptocurrency trading platform, notes that this step paves the way for greater adoption of this type of payment, while also continuing Sotheby's experimentation with new technologies.

"With the growing adoption of digital art and NFT, in addition to a greater focus on digital innovation, we have seen a growing desire among collectors for more fluid payment options," explains Sotheby's chief technology officer in a statement. Stefan Pepe.

Specifically, "Love is in the Air" will be auctioned in the evening sale of Contemporary Art in New York on May 12, considered one of the most outstanding of the year, and, according to experts, has a value between 3 and 5 million dollars (2.5-4.1 million euros).

The company notes that US dollars are used to indicate the value of the piece, as is often done at Sotheby's New York headquarters, but the buyer has the option of paying the equivalent of the hammer price with Ether or Bitcoin.

This novelty announced by one of the leading auction houses in the market comes after its debut last April in the sale of NFT works, a technology used to give a piece of digital art a stamp of authenticity and grant it a unique character, in which more than 3,000 collectors participated.