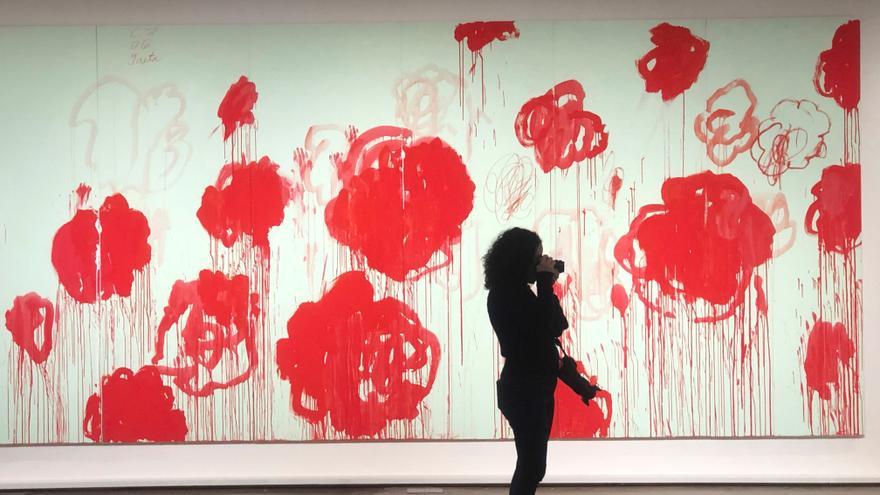 The auction of works by great artists such as Jackson Pollock, Mark Rothko, Andy Warhol or Pablo Picasso by the House Sotheby’s reached today $ 676 million, above the expectations set by the firm, in an evening in which several works such as Pollock’s “Number 17”, sold for $ 61.2 million, beat the artist’s record in a bid.

A total of 35 batches of the collection that billionaire Harry Macklowe has put up for sale after divorcing, they were auctioned before a crowded room of interested parties and in which representatives of sellers who bid by phone from London and Hong Kong animated the session by spurring the prices of many of the lots.

An example of the 24 works whose final price broke the ceiling set by the organizers was “Untitled XXXIII”, by Willem De Kooning, whose value had been calculated by Sotheby’s between 12 and 18 million, but that reached the 24,323,000 after five buyers competed for the canvas.

“Number 17”, executed in 1951 by Pollock, was the eleventh batch to go on sale and is part of those known as “Black Paintings” of Abstract Expressionism that the artist embodied.

The auction house calculated that it would reach an amount between 25 and 35 million, a maximum that exceeded 26 million, after the hammer price (53 million) was added taxes.

He also highlighted the table entitled “No. 7” by painter Mark Rothko which reached the second highest price paid at auction for a work by the artist.

The work, executed in 1951, the year in which the American painter reached his artistic maturity and which includes a delicate range of lavender, green and orange, was acquired for a price of $ 89.3 million.

Its sale, which was pegged at the hammer’s fall at $ 77,500,000 ($ 82.5 after tax), was also followed by the applause from the audience, although in this case it did not exceed the 90 million maximum that Sotheby’s had set.

The work “Figure”, by Pablo Picasso, It was another of the lots that exceeded the highest price that the auction house was figuring, 25 million dollars.

This work by the Spanish artist, a project for a monument to Guillaume Apollinaire It was sold for 27,265,000 million.

Other great artists who broke marks were Andy Warhol, whose “Sixteen Jackies” sold for $ 33,872,250., 13 million more than the expected maximum, as well as Jeff Koons, whose work Aqualung, valued at between 8 and 12 million, sold for 15.2.

Prices set by other artists

Although with a more modest price than the previous ones, the work “Untitled” by Robert Irwin, not only exceeded Sotheby’s best expectations, but with a sale price of 8.7 million (2.7 million more than the estimated maximum) it became Irwin’s most expensive sale at auction.

The work “Track Painting” by Michael Heizers, sold for $ 1.1 million also marked an all-time high for the artist in bidding, although its price did not exceed the 1.2 million ceiling that Sotheby’s had estimated.

Another of the great works put up for sale was sculpture “Le Nez”, composed by Alberto Giacometti in 1949, and that despite reaching the astronomical figure of 78.4 million, did not exceed the maximum set by the house, which had valued the work between 70 and 90 million.

The Macklowe Collection Auction, described as “historic” by the organizers, is the Sotheby’s fall season trigger that could turn into the “most valued in history” of the auction house since all the works exceed 1,000 million dollars.

Macklowe, promoter of some of the most emblematic skyscrapers and discussed in recent years in New York, he put these works to the vein after his high-profile divorce from Linda Burg in 2019.

But in addition, this autumn collection contains numerous works by other collectors, some anonymous and others known as Douglas Cramen or Brillenbourg-Capriles, considered the latter one of the most complete compilations of Latin American art of the twentieth and twenty-first centuries.

Among the works to be auctioned this week is the self-portrait of Frida Kahlo “Diego and me” (from an anonymous collector), which despite its small size comes out with a value of 30 million dollars.

Sculptures by Henry Moore or by Alexander calder, oil paintings by Siqueiros or Oswaldo Guayasamín, augmented comics by Alberl Liechtenstein, a reproduction of a mural of Bansky and works by De Kooning, Botero, Degas and many other relevant names in the history of the twentieth and twenty-first centuries will be put on sale in this market where everyone can contemplate for a few moments the works that a privileged few will take home.