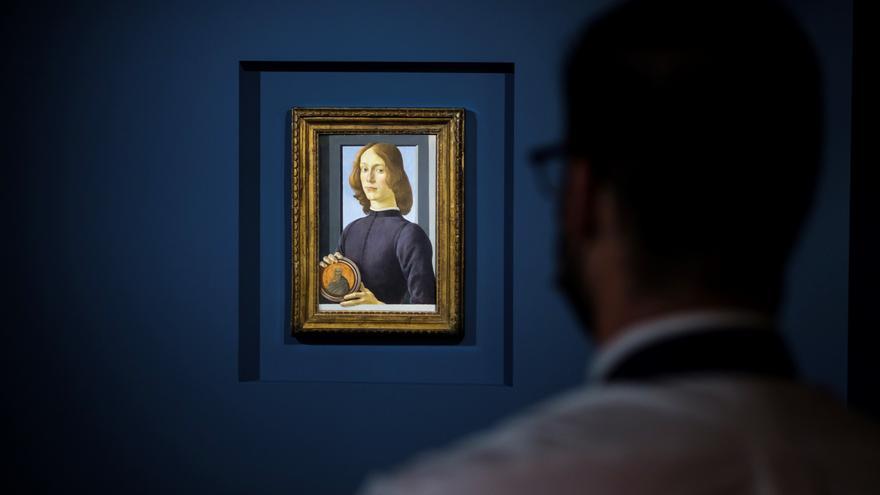 New York, Jan 22 (EFE) .- The auction house Sotheby’s is preparing these days to sell next week a work by Sandro Botticelli that experts have valued at about 80 million dollars (more than 65 million euros), in exceptional conditions and only one of the three portraits of this Renaissance artist left in private hands.

“In my thirty years of professional career I have never had a Botticelli that comes close to its quality, condition, beauty and importance,” Christopher Apostle, New York director of the Sotheby’s Grand Masters department, told EFE.

Painted some 540 years ago, the piece in question, “Young Man Holding a Roundel”, waits alone for a possible new owner in one of the elegant and sober rooms of Sotheby’s New York headquarters, where these days it can be admired by anyone who approaches the facilities, although by appointment, given the rules established by the coronavirus pandemic.

“Sandro Botticelli is really the quintessential artist of the Florentine Renaissance. Before Michelangelo and before Leonardo da Vinci there was Botticelli. And of course, his famous paintings such as ‘Spring’ or ‘The Birth of Venus’ are authentic icons”, he emphasizes the expert.

Apostle says the portrait has been valued at around $ 80 million “compared to other masterpieces that have hit the market, whether by Francis Bacon, Picasso or other great names in Western art history.”

“We are talking about these levels,” says the representative of one of the most important auction houses in the world, who also points out that the last time the work went on sale was almost four decades ago, in 1982.

“Before that it was in a private collection from the beginning of the 20th century and before in another from the end of the 18th century, we think. So you don’t see it very often,” Apostle says.

Very few of the portraits of Botticelli, who painted various members of the Medici family, the great patrons of the Florentine Renaissance, survived the passage of time, and most of them are on display in museums.

The Botticelli will be auctioned at an event broadcast on the internet next Thursday, January 28, as part of a week that Sotheby’s dedicates to the great masters of art history, including Rembrandt and his “Abraham and the Angels”, a painting of so only 16 centimeters high and 21 long painted in 1646.

Despite the size of the piece, which will also go on sale on January 28, it is considered one of the best works by the Dutch artist to be auctioned and was last sold to the highest bidder in London in 1848, when it was paid for. 64 pounds sterling (about 72 euros at current exchange rates)

Now, experts have given it a value of between 20 and 30 million dollars (16.5-24.5 million euros), since it is one of the five Biblical paintings by Rembrandt that are still in private hands, even though he painted 136 of them.

The global economic crisis caused by the pandemic will not affect the value of these great works, says the Sotheby’s expert, since the market for great works of art has continued to move at practically the same pace, only now virtually.

“I think that both paintings are so exceptional and so special that it is an opportunity, even if we are dealing with a pandemic. The reaction (of the clients) so far has been very good,” said Apostle, who considered that Botticelli’s piece could break a record.

Also on sale will be “Autumn”, a 1.2 meter tall marble sculpture that Gian Lorenzo Bernini, considered one of the best sculptors since Michelangelo, carved with his father, Pietro, between 1815 and 1618.

With a value of between 8 and 12 million dollars (between 6.5 and 10 million euros), the piece is one of the few of Bernini and his father that remain in private hands.