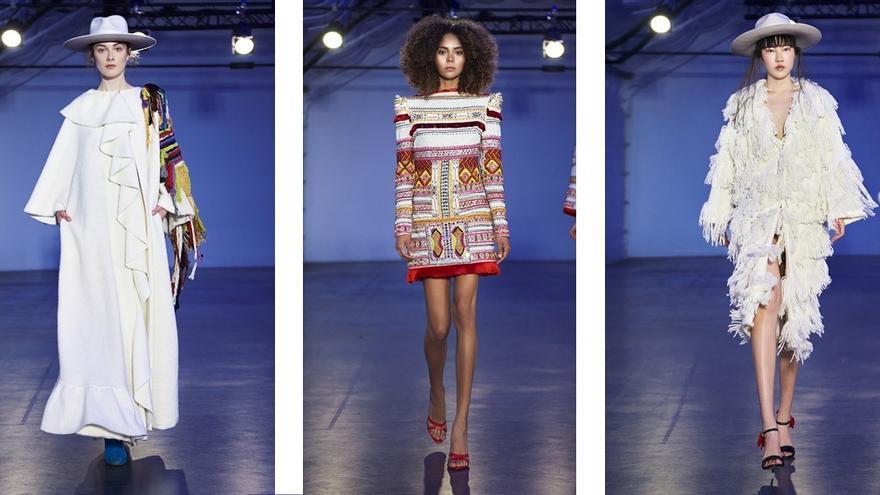 Madrid, Apr 9 (EFE) .- Sisterhood and craftsmanship are the keys that unite the parades of Ernesto Naranjo and Odette Álvarez, who today have shown their proposals at the Mercedes-Benz Fashion Week Madrid through “El teatro de la life “, for the Andalusian designer, and” Odegna “, for the Cantabrian creator.

A woman performs on the stage of “The Theater of Life” and her audience is other women who applaud and praise her, freeing her from the prejudices of society. The new collection by designer Ernesto Naranjo, “007”, starts from this concept. As an identification stamp, he does not name his collections, but lists them: “Thus they are more timeless, they are not subject to seasons or trends,” says the designer to Efe. .

Using digital means for the presentation, which for the moment “is the only way to give 100% to the audience” in addition to “reaching the whole world”, Naranjo makes personality and character the protagonists of his new line : “Each woman has to do the theater of life to cover stereotypes that society has marked, such as being beautiful, a good mother or dressing in a certain way,” she explains.

A concept that has been reflected in the lines of the collection, introducing changes such as the appearance of separate pieces to be combined instead of one-piece dresses, and a chromatic range and staging in dark tones, replacing vivid colors. that the Andalusian usually uses.

Composed of fifteen “looks” in primary colors that evolve from black to red or Klein blue, the firm exhibits digital prints that “recall the make-up of the eighties”, as well as jewelry with a punk aesthetic, which reveals “an attitude combative and rebellious ”.

“Our DNA is still very present in pieces that are reminiscent of haute couture, but from a modern and easy-to-wear touch,” he explains about the garments, with lines of soft volumes and very geometric shapes that adapt to the body of women in dresses. light.

As is customary, crafts take on an important place: hands that recover “bits of Andalusian roots”, such as bullfighting and Goya iconography “in a different interpretation from the traditional one and adapting it to our essence”, he points out.

The Cantabrian Odette Álvarez has taken as a reference her mother Odegna, who gives her name to this new collection, the first line of the designer under her own name after ten years of experience with the firm “Tette by Odette”.

“Since I was little I have been linked to cutting and making, I have always seen it at my maternal grandmother’s house, and when I started with the firm my mother always helped me, she deserved that my first line was a tribute”, Álvarez explains to Efe .

A new line that arises after “moments of reflection during confinement” and, although he assures that he had never wanted his name to be the protagonist, he “had the need to take a step forward” in order to give “something more exclusive” to its clients, first line of artisan brand, made to measure and limited edition.

Aware that it is being “a difficult time” in which fashion is affected, his bet is twofold: “This year I have taken everything more strongly and I have launched two new lines, one of more sporty garments and this first line” .

In digital format and recorded at El Espacio Harley in Madrid, the mix of fabrics, anoraks turned into dresses and the characteristic coats of Tete by Odette, in which sewing, folklore and sports style come together. A contrast to the bullfighter jackets with marked shoulder pads and mirror embroidery that were also present.