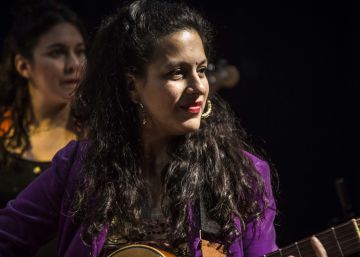 Paula Rodríguez is a bass player, double bass player and composer from Paraguay with own disk and a decade as a professional. Even so, a man invited her to work in his band to be "the one who brings beauty." On a road trip, a member of another group did not stop harassing him, first in private and then in public. "They play well to be women," other musicians often exclaim after the concerts of Evas, his band. Everyday examples of machismo that prevails in the Paraguayan musical environment.

Rocío Robledo is a singer-songwriter and member of the Las Conchas sin Mar group in a country more than 1,000 kilometers from the nearest coast. Author and soloist in her project No man's wife The musical producer of the friendly band Purahei Soul travels in Asunción, while he finishes recording on his phone two verses in Guarani that have just occurred to him for a chorus.

The air conditioner keeps the hot flash in the studio where he is recording a song with eight other women. On the street, as usual, the temperature reaches 35 degrees. There are 24 hours left for the Sorora Festival, a transgressive event for the local music scene, and Robledo, together with Paula Rodríguez, is one of the organizers of this cultural event full of claims that was born precisely because of his warrior impulse one day in 2018 , when he unleashed an avalanche in the industry without trying.

But in the same spirit as its neighbors, this Paraguayan feminist singer and militant decided to personally scour one of the main music festivals in social networks, sponsored by one of the most important beers in the country. Your poster for 2018 It had 11 bands, all of them composed and led by men. Only one woman was part of the group as a chorus girl.

Rocío Robledo narrated the facts in a Facebook post, labeling the organizers, and proposed to guarantee festival spaces for projects made by women. But the reaction of the Paraguayan musical community was not what I expected: “I was scared of the violence and virulence with which many people replied. On the one hand, many girls identified and supported what I raised, but, on the other, I felt a lot of hatred of many people who sent me to the kitchen, ”says Robledo. Thus he saw and lived the resistance that existed “even by the colleagues themselves whom he believed to be allies” and, therefore, he decided, together with his companions, to make the Sorora Party.

In Paraguay there are not yet official data of how many groups of women participate in the large public and private musical events but in Argentina, the members of the campaign More Live Music They did a study on 46 festivals in their country and the average percentage was only 10%.

The most used definition of sorority is "the relationship of solidarity between women, especially in the struggle for their empowerment." Hence the name of this festival. In its second edition, held on November 30, at the controls of sound, production and every detail of Party There were women.

"It is an opportunity for women who are in all areas of the creative industry to demonstrate that they can be in charge and make decisions," Robledo says. “The level of machismo is very strong, but I feel that for some time now, the people who decide in the industry have begun to have, at least, a project led by women in their posters. These debates are very present in the region, but they were not so much in Paraguay, ”adds Robledo.

The Paraguayan Sorora Festival will grow next year and will have more international guests thanks to a small fund granted by the Ibermusica program. In addition, they will ask for donations through the Internet and sponsorships to companies that agree with their ideals and respect the autonomy of the festival.

“Paraguayans love foreigners and more if they return,” celebrates Bonnie Devine, one of the members of La Múcura, a guest group this year. It is the fourth time they travel to play and exchange projects with other artists. “Before coming, the imaginary we had of Paraguay was null. We had no idea of ​​the music, the culture, the kind people, or the Guarani. Only that the capital was called Asunción and that many travelers skipped the country as ignorant, ”he added.

Paraguay sounds like guaraní, the mortar chopping the medicinal herbs for the cold mate, that is, the i will have. Also to cumbia, guarania, polka, indie pop and blues or jazz gringo. Now that mix also to equality.

This was the gala: from the embarrassment to the deep rain