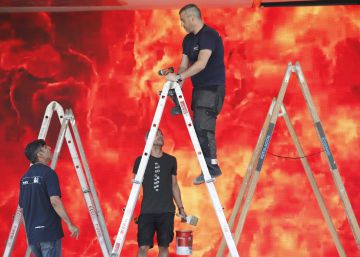 The labor dispute between Fira de Barcelona and the professionals who assemble the aerial structures of the shows, the so-called riggers, has been "the worst crisis Sónar has experienced in its 26 years". This is what the three founders of the advanced music festival have assured this Tuesday at a press conference after hearing the judge's decision, which has allowed Fira to continue mounting Sónar with two contracted companies to prevent the strike from affecting the festival. The organizers admit that the uncertainty about the festival, which begins on Thursday, has affected the sale of tickets and have claimed to have felt "alone" during the conflict. Before the "silence of the administrations", they have opened the door to leave Barcelona if the crisis repeats itself: "We have no desire to give the capital to another city, but we have done everything we could".

The feeling this Tuesday at the Fira de Barcelona facilities in Montjuïc, where the Sónar by Day will be held, was one of discomfort and anger for what is perceived as a bittersweet victory. The festival will be held normally, but this edition will be marked by the difficulties to carry it out. It's the first Sónar after Advanced Music sold the festival, last year, to the American fund Providence; It is the first time that Sónar is celebrated in July and not at the end of June, a change of dates that never pleased the organizers and that was propitiated by the Barcelona fair calendar; and it is the first time that a strike puts the celebration of the festival at risk.

The three founders, along with the executive director of Advanced Music, the promoter of the festival, have drifted off after their celebration was guaranteed. "It has been a very big brown, we have suffered a lot and we should not have reached this situation," said co-founder Sergio Caballero. "The silence of the administrations surprises, it is evident that in other crises that affected other fairs they have appeared, and in this case we have been alone," added Ricard Robles. Faced with this passivity of the administrations, and asked if another city would offer more stability, the promoters have not ruled out the possibility of moving the festival to another city if the crisis is repeated: "We are from here, and we have no desire to move, But sometimes you wonder if the city administration sees what we are doing, "Caballero said.

Sónar was hanging by a thread until the morning of this Tuesday, when the social court 27 of Barcelona has decided not to accept the precautionary measures requested by striking workers. The riggers they sued Fira de Barcelona when they considered that their right to strike had been violated with the hiring of two new companies to carry out the assembly tasks and avoid the impact of the protest. The judge, in its resolution, urges the parties to find a legal solution "that allows to celebrate the festival without attacking the right to strike", but considers that it can not prohibit the assembly, since it would be a detriment to the other workers of Sónar and for the festival itself.

"The necessary reflection is to see if this was necessary, we believe that no, and we do not understand why we have been used in this way until a judge has had to resolve a situation that nobody wanted", said Ricard Robles, one of the Sónar directors. The organizers of the festival explained that they have felt in the middle of a conflict in which they had to play the role of mediators "that did not play". "We respect the demands of the riggers, some of them are our partners since the first Sónar, but we also had to guarantee the festival," said Robles.

The promoters of Sónar have avoided giving figures on the fall in the sale of tickets, but they have admitted that the conflict has caused that they sell less in the key days, the previous ones to the celebration of the festival. "We will work hard to reverse a situation that has not favored us, but we are not talking about 200 entries, they are important figures," said Caballero.

The co-founder Enric Palau pointed out that this space has some managers and institutions involved that should "be able to guarantee in the future that it will not happen again". However, he added that the festival is being held and that everything is going smoothly, with everything ready to start on Sónar + D on Wednesday and the Sónar Festival on Thursday with more than 140 scheduled concerts and waiting for some 100,000 attendees.