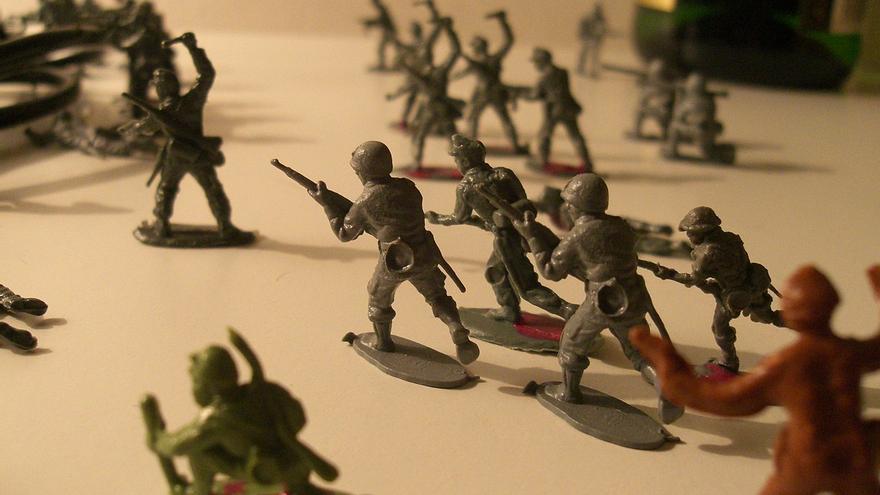 A handful of Comansi figures from the 1970s have just arrived at the National Costume Museum. They have arrived in a box: there is a soldier in blue with his arms raised holding a rifle in his left hand. Another is dark gray and carries a flag with both hands. A brown one with a machine gun pointing to its right side. A red medieval soldier carries a spear with both hands. There is also a black horse at a trot and the saddle is red. And the Indian, with his left arm extended, raises a weapon and his right arm is flexed, akimbo. There's even one that rests her leg on a stool and appears to be playing a guitar. A kneeling bullfighter appears there with his arms outstretched, as if begging for mercy. There is also the bull. In total there are 85 and from the moment in which the institution accepted this donation from an individual they became a Asset of Cultural Interest (BIC), that is, they are protected as historical and cultural heritage with the highest category.

The Comansi are the toy of the Transition, cheap, battered and made of plastic. The country was one step away from hyperrealism and the worship of models. In the seventies, people loved types, ideas. "Abstractions," says the writer Javier Pérez Andújar on the other end of the phone. As an expert in contemporary cultural history and the symbols of everyday life, he explains that the key lies in the null realistic intention of these "industrialized" figures with whom the working class played. "Realism was the downfall. The important thing was abstraction, credibility and imagination. Realism is posh", says the author of the novel the year of the buffalo (Anagram). In his eyes, the passage to realism was a false step in the toy industry, which became bourgeois with that new taste in which the prototype ceased to interest to adore the model: an Indian was no longer interested, but the figure of Luke Skywalker from starwars.

Spain changed so much in the transition from the 1970s to the 1980s that not even the Comansi company, operating in l'Hospitalet de Llobregat, wants to talk about those times. "There are no longer people from that time in the company. As the saying goes, you have to renew yourself or die and that is what we have done in recent years," comments Fernando Falgas, "General Manager" in a laconic email. of Comansi. The company has seven employees in the office and contracts production and logistics. Now he is dedicated to hyperrealism: he has Peppa Pig dolls, Barça and Espanyol players, Pocoyo, Looney Tunes... Falgas' message bears his signature on the company logo, which reads: "Complete Toy -Comansi toy". Renovation was business as usual.

The museum has valued the donation of the set of Comansi figures at just over 700 euros. In 2021 they accepted almost 670 pieces valued at more than 110,000 euros. In the list we find objects of all kinds, from dresses and suits to photos and fashion magazines, posters, a Singer sewing machine with pedal and table or Philishave and Braum shavers. In 2018 they accepted a sticker album from the 1967-68 league, that of Real Madrid by Gento, Pirri and Amancio. That year, Barcelona defeated the Whites in the Generalissimo Cup. The Copa del Rey would inherit that competition. That album is also a BIC.

The varied collections of Costume Museum they obey to the last name of the same one: Center of Investigation of the Ethnological Patrimony. These collections are unique in Spain, they are intended to recover and preserve the collective memory of society from goods that are part of everyday life. They compile the cultural history of the ancient Spaniards to contextualize their clothing collection and build a narrative that goes far beyond a tour of the fashion of the moment.

"We can tell many more things and get rid of the frivolous patina of some clothing exhibitions. This is not just a showcase, our collections are a very rich human and social document." Who speaks is Paula Ramírez, deputy director of the Costume Museum. We have just asked you about the profound reorganization of the halls of the institution. After many months of closure, a "comprehensive change" has been made, says Ramírez, who points out that in the new narrative they have contextualized "much more."

To contextualize is to subtract power from the arbitrary imagination to add information. It is the main task of the museum curator: to explain what there is from the frame to the outside, what the exhibit hides. The context directs the gaze, it takes it where it wants so that it understands what it wants. Context makes the unthinkable possible. A collection of plastic figures from Comansi together with the clothing of the seventies is context, reconstruction and story. A showcase composed of perfume bottles, cream jars, beauty tools, too. The same happens with the extraordinary section of advertising posters in the room dedicated to the clothing of the years "towards a leisure industry". In the showcases they have included a fantastic model of a Voigtländer & Sohn photographic camera, from 1900. Attention to the construction of the image is something that is very interesting in the new presentation.

And the management of this state museum has not avoided thorny issues. In the scene recreated in the window dedicated to "time of war" a Falangist couple is presented. Her mannequin wears a tight black dress and hat, and he a white suit with a black armband with the Falangist shield sewn in red. "The uniformity of clothing and the recurrent use of symbols are common to the totalitarian principles of both ideological extremes, which make conscious use of the meaning of clothing," can be read in the explanatory card. "We want to create debate, propose relevant issues, offer points of view and open questions," says Paula Ramírez bravely. In 2021 they have acquired a model of the Seat 600, "the car that changed an entire country", which had already used these years as a loan to illustrate the sixties and seventies. The Ministry of Culture has not been able to inform this newspaper about the purchase price of the car, or the annual investment in acquisitions.

The National Costume Museum has received another very important donation: Carmen Alborch's wardrobe (1947-2018), former Minister of Culture with Felipe González, councilor of Valencia, Senator and Deputy. It is the second part of the repertoire that the family has given to the museum, and the new installment has been valued at 12,250 euros. The most expensive piece is a white wool coat with a hood by Francis Montesinos (2,000 euros), who is the designer of most of his clothing (with dresses, blouses, skirts, shirts, jackets, etc).

"The importance of his image went beyond the personal, it represented our country and its modernity. Images that are already part of the history of fashion and of Spain," writes Francis Montesinos in the catalog of the exhibition that the Center del Carme Cultura Contemporània is currently dedicating Alborch. "She, Carmen, already drew an image of her own, it wasn't just the clothes, she emanated modernity and cosmopolitanism, one would say that she had a different, grateful, attractive body language, and all that culminated with a special smile," adds Montesinos over the years. in which they coincided in the Valencia of the seventies and eighties, years of galleries, film forums, bookstores and "secret meetings".

Those dresses are the image of the years of transgression and joy, who longed for freedom and future. "It is a very important donation. The first installment contained clothing from other designers, international and avant-garde as well," says Paula Ramírez. They are not yet on display because they have to pass the restoration protocol: the garments are quarantined in a transit room where the restorers make sure that no parasite sneaks in that could destroy the fabric. All of them are microvacuumed to make the "bugs" disappear and in some cases a disinsection treatment due to anoxia (the oxygen is eliminated so that they die). Doña Pilar de Borbón y Borbón's wedding dress —designed by Isaura, in 1967, and valued at 6,000 euros—, which has been donated by her family, has also been vacuumed to eliminate any parasites.