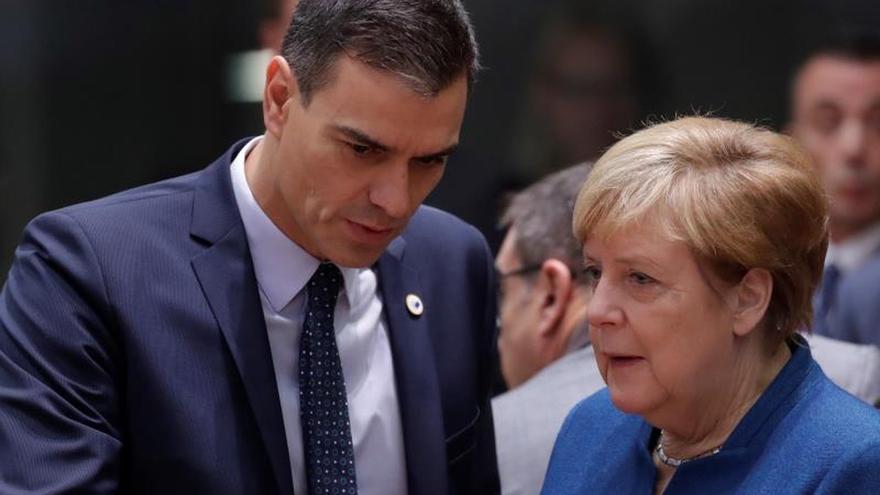 Urgency for the agreement. The Prime Minister, Pedro Sánchez, and the German Chancellor, Angela Merkel, have appeared together to make a statement before meeting this Tuesday in Berlin in the rounds leading up to the European summit on June 17 and 18. At stake is the € 750 billion recovery fund for the coronavirus crisis and the EU’s multi-annual budget for 2021-2027.

Merkel, EU President on duty, recalled that the situation is “unprecedented”, and that “action” must be taken to return to the path of growth: “It would be desirable to reach an agreement as soon as possible, time is short, there is than having certainty and thinking about the digital transition and climate change. These are the challenges of the coming years. ”

“We are called to a historic milestone,” said Sánchez, recalling Merkel’s comparison with World War II. “We must be aware of the historical moment we are going through and we are called to reach an agreement as soon as possible. July must be the month of agreement, there will be no recovery without agreement. There are divergent positions, we must save discrepancies, but we have the will to reach to an agreement, although it is not yet certain. Bilateral relations with Spain are very good and we know that it has been hit hard by the crisis. ”

Sánchez also pointed out that the pandemic “has left a lesson in humility”, due to the fact that Europe had not suffered “this type of pandemic.” But he added: “Opportunities are opening up, the European project, public and universal health in Europe, the model of social market economy and redistribution through the pillars of the State have been valued.”

The Prime Minister has recognized that it is time “to make economies more resilient, with the green transition, the strengthening of the single market, and the digital transition. It is necessary that the EU not only look inward, but also look to the African continent. The EU during these months has begun to respond to these challenges. ”

“The union has never been built with vetoes, but with the will to dialogue and agree, and we are called to that. If we delay the agreement, we will delay the recovery and the crisis will worsen. And Spain will do everything possible to reach an agreement as soon as possible. possible, “said Sánchez.

Dutch Prime Minister Mark Rutte has alluded to countries that need the recovery fund due to the economic disaster, such as Spain and Italy, for not having made “reforms in the last thirty years”, Telegraaf reports, to justify a “strict” conditionality in exchange for the anti-crisis fund.

Rutte refers to reforms in the labor market and in the pension system that, according to the Dutch prime minister, have already been called for by the European Commission. “They just have to do it,” said Rutte in the Dutch Parliament, where he predicted that it will be “very difficult” to reach an agreement on the “very strict conditions” for transfers and subsidies this weekend.

To accept the subsidies, “countries must adopt the reforms proposed by the European Commission last year,” said Rutte, who demanded that the Netherlands be able to see that the reforms are implemented when money is transferred, according to De Telegraaf.

After meeting Rutte on Monday, Sánchez was in Berlin on Tuesday before heading to Sweden for dinner with Prime Minister Stefan Löfven. After this meeting and the subsequent appearance before the press, Sánchez will fly to Paris, where he will meet with the French President, Emmanuel Macron.