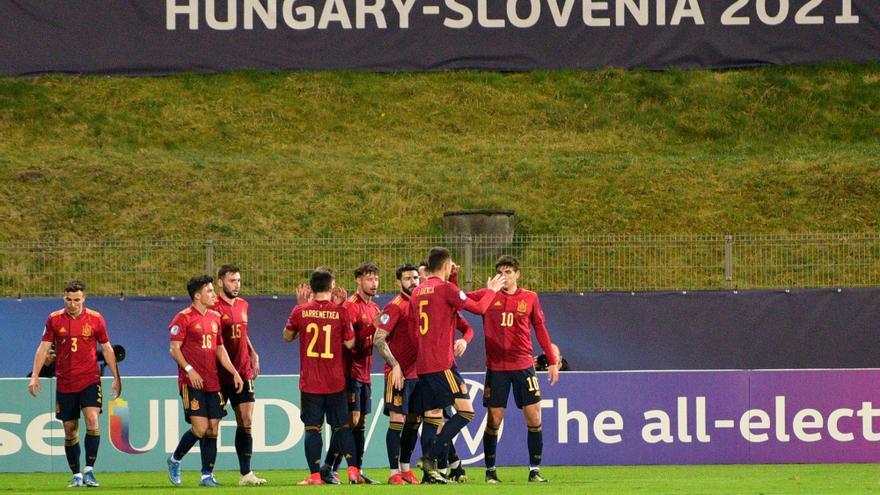 Spain certified its place in the quarterfinals of the U21 European Championship with a 2-0 victory over the Czech Republic it took a long time to arrive. It was not until the entry of Dani Gómez at m.65 when Luis de la Fuente’s men breathed. His double (m.69 and m.78) and defensive solidity They gave the classification after living in the wire.

The bad news was not long in coming from Maribor. Italy went 3-0 up against Slovenia in just 25 minutes and was a little short of snatching first place from Spain, while Spain relived problems with its ninth consecutive game going to halftime with a 0-0 draw.

And that those of Luis de la Fuente tried. Up to eight shots, three of a very active Manu García from outside the area, but only one among the three suits. The clearest occasion was in a shot attempt by Ander Barrenetxea, debutant this Tuesday in the European Under-21, after a great move by Javi Puado. The Espanyol footballer, the best against Italy, left his marker behind, rushed the baseline and put a death pass to the small area that finally did not find a finisher.

The pulsations began to rise to the selector. In the first life or death match of the tournament, the tension increased and he looked on the bench for the key man of his plan, Martín Zubimendi, who proved himself but He continued with bad feelings after receiving several blows to the ribs in the two previous games.

The Czech Republic, which was left out of the tournament by the result, looked harder for 0-1 in the last five minutes of the first half, but without disturbing Álvaro Fernández. The the referee’s whistle was a relief for the Spaniards, just like Cutrone’s missed penalty in the other game that made them, so far, keep the first position of the group.

No change of players at halftime, but position. And it was key. Barrenetxea went to the right wing and changed the slow rhythm, always two or three touches, of Spain. He warned always facing and in the m.69 he assisted for 1-0 just when Italy already did their homework scoring the fourth goal that gave them the first place if Luis de la Fuente’s tied.

The first change came at m.65 and completed the circle. It changed the game completely. ANDDani Gómez entered, four minutes later he opened the scoreboard and 13 later he saw the door again. Go out and kiss the saint. He already scored a double in October against Kazakhstan in just 45 minutes. Play that Hugo Guillamón started by breaking lines from behind; the importance of centrals beyond defensive solidity.

Eighth consecutive game without conceding a goal, but the defenders went further against the Czech Republic. Guillamón started the creation of the first goal and Jorge Cuenca, with great anticipation, the second. A possession that Manu García took advantage of to serve a chopped ball to a Dani Gómez who hit him first with his left foot and made it 0-2 at m.78.

Solved party and Luis de la Fuente took the opportunity to make group. He awarded a Riqui Puig who had not yet made his European debut and gave more minutes to the youngest of the squad, Yeremy Pino. Spain overcomes the doubts of others and will continue to defend its crown, seeking the sixth title in the category.

Incidents: Third and last match for both teams in the European Under-21 tournament played at the Z’dezele stadium in Celje (Slovenia), which was played behind closed doors due to the coronavirus pandemic.