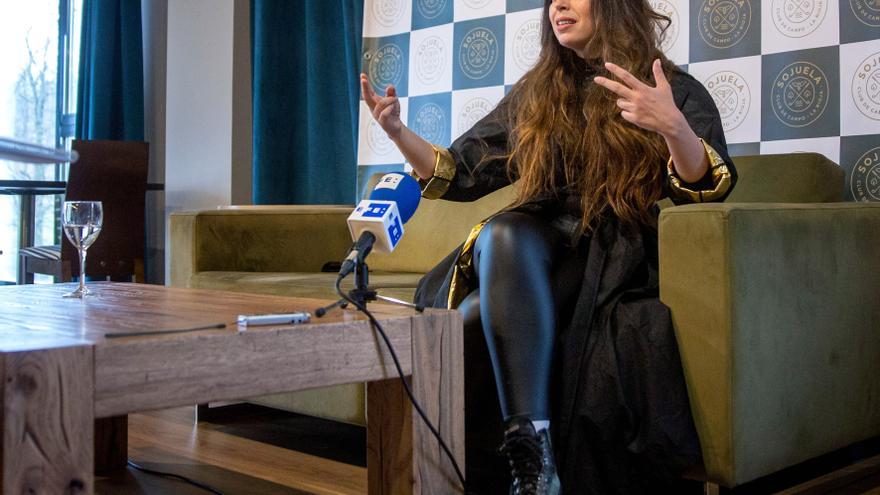 Sojuela (La Rioja), Mar 19 (EFE) .- The singer Soleá Morente has announced to Efe this Friday that her fourth album, “Aurora y Enrique”, will be released on the market next September, with songs inspired by the love story of his parents, composed during the months of confinement by covid-19.

Morente (Granada, 1985) has started, on the golf course of the Rioja municipality of Sojuela, the filming of the video clip for “Iba a decírtelo”, the first single from his new album, directed by Juanma Carrillo, who has also chosen other locations in La Rioja, his land, like a quarry, a church and some rocks.

“I was going to tell you”, which will be released in May, was conceived during the confinement months of last spring and aims to convey “a state of mind that arises from a feeling of powerlessness” in the face of a very complicated situation, the singer explained.

To reflect this feeling that she experienced during the first weeks of the pandemic, Enrique Morente’s little daughter has indicated that she uses a metaphor through a love relationship in which “one wants to say something to the loved one, but it is impossible.”

In the lyrics of the song, which is “quite different” from other of his compositions, there is also “a ray of light, sweetness and illusion”, which, he added, is what helps to maintain these times ” alive “.

The beginning of the confinement in March 2020 caught her just one day after having released her third album, “What you lack”, which for this artist was “very disconcerting.”

“The situation was so strong and so painful that everything was reduced to that mine were well and that people did not continue to get sick, but, thanks to that time, I was able to get productive moments that I did not have and I have been able to compose another album”, has detailed.

In “Aurora y Enrique”, Soléa sings “to the idyllic love” that her parents professed, of which now she does not find so many references in society, but the lyrics of her new songs also speak of other loves of her generation and makes “a I sing to life “.

It will also include collaborations with other artists, among which he has mentioned his sister, the flamenco singer Estrella Morente, and the Murcian artist Marciano Criminal, who are “two opposites”.

In this sense, he has defended “interaction” with colleagues from different disciplines and musical genres as part of his work.

But, before his new album sees the light, he will present the songs of “What you lack” in a tour of several concerts, which will begin on March 27 at the Reina Victoria theater in Madrid.

“For me, the surname Morente is the wings, the freedom, the privilege, the luck and the fortune of belonging to a clan and having had a father as great as a person and as an artist like Enrique Morente,” he assured.

Regarding the “weight” of his surname in his career, he pointed out that, “when you are young, life scares you and makes you more afraid, but, as you get older, you realize that it seemed so complicated it is not so hard”.

“Art is the best therapy,” stressed this artist, who believes that her musical style has “evolved” from her life and professional experiences.

The “uncertainty and curiosity” that she has not stopped feeling make her continue “alive” and continue “looking for” new paths, “with the same desire and a little more experience”, she has reflected.

Literature is for this singer “50 percent” of her existence because she considers it “the science of life.”

“My father instilled in me the habit of reading. He had a large library, both in Granada and Madrid, and, for him, literature was his university because he was a self-taught man. For this reason, the Morentes’ music is also literature “, it is finished.