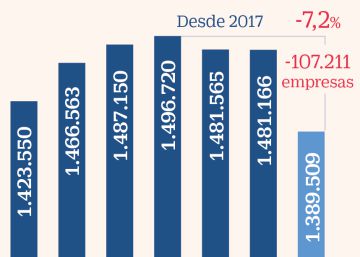 On the last day of June, there were 1.4 million companies with a Social Security contribution account. It is an account, similar to the worker’s membership number, that every company must have in order to hire a worker and pay, through it, the social contributions of its employees.

It is, therefore, an indicator of the progress of business activity, since the disappearance of these accounts is generally due to the closure of the company, so its evolution also affects Social Security income.
According to the latest official data for the first semester of the year, during the first two months of the pandemic (March and April), a total of 133,757 companies stopped contributing to Social Security.

Although, as the de-escalation phases progressed in different parts of Spain, in May and June, business activity began to reactivate and in both months the Social Security Treasury recovered 42,121 contributing companies. This means that, in net terms, the system has lost 91,634 companies compared to those it had in February, before the start of the global health crisis derived from the pandemic caused by Covid-19.

But the pandemic’s blow to business activity has only worsened a streak of corporate destruction on the Social Security registry. According to data for June, in the last twelve months, 132,093 companies with less listing accounts had already been notified in that period. In fact, in the last year, companies have been destroyed in this registry in every month except for the aforementioned May and June, last February and November 2019. This represents a drop of 8.6% year-on-year, according to data from the Ministry of Inclusion, Social Security and Migrations.

Another issue reflected in this registry is how the size of the companies evolves. Indeed, one of the weak points of the Spanish economy is the small size of its companies, and the data so far this year does not give good news regarding the task of increasing this size.

If the number of workers in companies with a contribution account is taken into account, it is observed that the number of all categories of companies decreases. In June, there were almost 80,000 firms trading less than in January, representing a 5.4% drop. But the cut was almost double in single-worker companies (9.5%).

The decrease was greater than 4% among companies with 51 to 100 workers and between those with 101 and 500. While the decrease has been the least among those with more than 500 employees, which have experienced a 2.6% cut .

In medium and large companies, these falls do not mean that companies disappear, but rather that they lose workers and go down to the next category, with fewer employees.
Therefore, statistics show that this is happening and that job destruction is reducing the size of companies, which is contrary to the objectives of achieving larger companies as a tool to improve the productivity of the economy.

On the contrary, in the case of micro-SMEs, especially those with up to 5 workers, it is more likely that their fall in Social Security statistics is due in many cases to the closure of the company.

The president of the autonomous association ATA, Lorenzo Amor, has drawn attention to this matter, who, with the latest membership data in hand, has complained about the loss in the last year of 94,012 jobs for workers hired by freelancers.

And, likewise, the registry recorded in June a total of 36,181 self-employed workers with fewer employees than in the same month of the previous year. This represents a drop of 8.1% year-on-year.