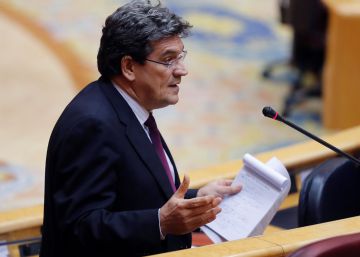 The Government took advantage of the Royal Decree on labor and tax measures to mitigate the effects of the crisis approved this Tuesday for something that, in theory, has nothing to do with the Covid-19. Specifically, to initiate the transfer of pension management for civil and military officials (Passive Class Regime) from the Ministry of Finance –where they have always been until now– to the new Ministry of Inclusion, Social Security and Migration.

Several additional provisions of this decree initiate this transfer, which will be definitively executed when another Royal Decree on the structure of the Ministry that José Luis Escrivá directs is approved. But, for the moment, it is approved that said pension management and other benefits State personnel will become dependent, first temporarily, on the General Directorate for Social Security Management and, later, definitively on the National Institute of Social Security (INSS).

However, it is a Regime to extinguish since since January 1, 2011 no new workers enter. Even so, there is still the aforementioned group of pensioners and about 700,000 contributors whose contributions, like these pensions, are paid by the State (which is the employer) with taxes. The current budget for the payment of these pensions is around 15,500 million euros per year, which, when this transfer takes effect, must transfer the Treasury to Social Security, including management expenses.

The contribution and retirement system of this group is substantially different from that of the rest of employees. Thus, instead of paying contributions, the State makes its contribution based on a “regulating credit” that is equivalent to the regulatory base but which sets the Budget Law each year for five groups (A1, higher graduates; A2, graduates media, C1 administrative; C2 administrative assistants and E, rest). In this case, the employer (the State) contributes 18.3% compared to 23.6% of the employer of the General Social Security Regime, and the worker (official) puts 3.86% instead of 4.7 % of the employees of the General Regime.

The pension is also calculated by applying a percentage to the aforementioned “having regulator” that corresponds to the official by categories, and this percentage varies depending on the years of service and, in this case, it is quantified with the entire working life. Passive Class officials can retire at 60 if they have 30 years of service, although a reduction coefficient is applied to the amount of the pension, but not for age, but for each year of service prior to the age of 35 . Thus, if they have worked 35 years when they turn 60, their pension is not reduced.

The secretary of Union Action of the FSC-CCOO, Raúl Olmos, declared yesterday that this union "hopes that the change from the Treasury to Social Security does not deteriorate the quality of the management of the pensions of the officials." While from the union of CSIF officials, they complained yesterday about not having been consulted and distrusted the use of a Royal Decree of Covid-19 to initiate this transfer.

On the other hand, in the aforementioned rule, Social Security also decreed that the postponement of debts with Social Security requested by companies and the self-employed will be "incompatible" with the moratorium on contributions to mitigate the effects of the health crisis on the business fabric.

The Social Security has not yet published the ministerial order of the sectors that will be able to take advantage of the moratorium, the rest must choose to postpone the interest rate of 0.5%, lower than the usual one.

Jeronim Perovic: "As long as the world needs fossil fuels, Russia will play a role in the energy market"

These are the cheapest hours of electricity this Saturday June 25

“It had nothing to do with inflation”