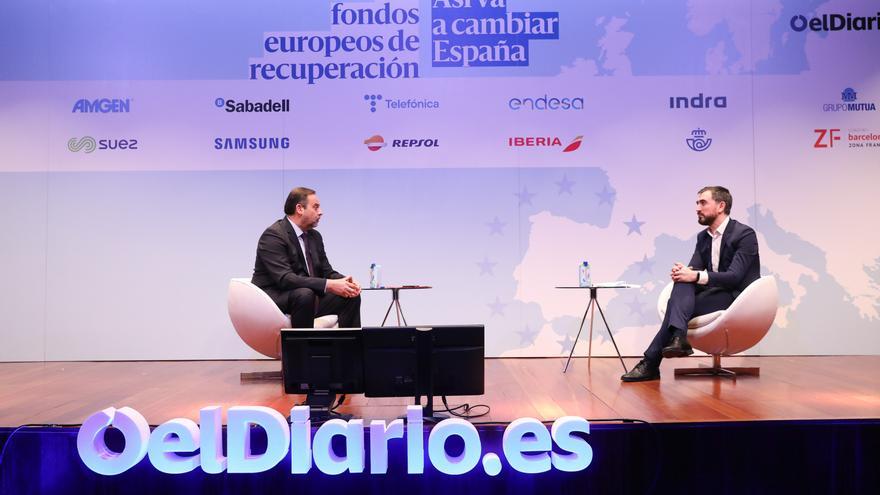 José Luis Ábalos, Minister of Transport and Urban Agenda, has participated this Wednesday in the forum 'European recovery funds: This is how Spain will change', where he defended that the Government intends to exhaust the "constitutional time" of the legislature .

"Until now we have been focused on the pandemic, the legislature begins now," he said, arguing that the coalition government is in good health. "We believe we have parliamentary support and they will not eat our morale," he pointed out regarding the speech of the PP in recent weeks after the success of Isabel Díaz Ayuso in the Madrid regional elections. "Governments are not changed by winning in a Community or by polls," he emphasized.

Ábalos has analyzed the plans of his Ministry in the recovery plan, which accumulates a good part of the investment objectives, up to 17,000 million euros, as the minister recalled in a conversation with Ignacio Escolar, director of elDiario.es. The socialist leader has lamented the role that the opposition has had with regard to European funds and the plan that the Government has presented to Brussels. "I do not aspire for them to help, but unless they do not boycott, it does not seem that the objective is that the Spaniards do well," he said. "With this dynamic, Spain is the one sacrificed," he emphasized.

Call for "respect" for migrants from Ceuta

The minister has addressed the migration crisis that has opened in recent days in Ceuta, with the crossing of more than 8,000 people from the border with the permission of Morocco. Ábalos has been "surprised" that a country allows such an exit of its "nationals". "This country must know that the people who leave it is a failure," he said. The minister has requested community collaboration in this matter because "the border of Spain belongs to the Union."

Again, he has pointed to the "regrettable" attitude of the opposition, specifically the PP, and has accused members of that party of "hitting cars" in the autonomous city. "I know they don't like it, but he is the President of the Government," he said about the reception with protests that was made to Pedro Sánchez this Tuesday in Ceuta. "The migrations are by necessity and the necessity must be respected", has indicated on the "sensationalist" messages of some parties. "You have to have a little empathy, respect."

Ábalos has defended the government's plan to impose a toll on highways to pay for the maintenance of high-capacity roads, which currently costs 1,200 million per year, because "we all want roads but we also want to circulate safely."

He has insisted on the European principles that "he who uses pays and he who pollutes pays" and has stressed that 40% of the transport of goods that circulates in Spain is foreign. These are "thousands of trucks" that cross the border daily and "pay nothing", and the cost of maintaining them falls on Spanish taxpayers. In any case, "what there is is a statement but we have no model."

The train is the great beneficiary of the European funds managed by his ministry in the Recovery plan, with 6,250 million in investment, because it is a "clearly ecological means of transport and is the bet for the future." Ábalos recalled that the Cercanías are "the medium that moves the most personnel", although it is the modality that receives the least funds (1,250 million) because "the great bet is in the corridors" (Atlantic and Mediterranean) "which are merchandise production, is to facilitate competitiveness ", and will increase the low share (4%) of the train in the transport of goods.

The minister has not wanted to specify when the connection of the AVE and Barajas will be carried out and has attributed the "great deficit in relation to Europe" of the public housing stock in Spain to "abandonment" by the governments of the PP. The plan includes 5,000 million for rehabilitation, for which the creation of 180,000 jobs is expected.

It is a "line of action" that does not intend to "fix" a market in which the doubt is not that this sector can be primed, but "if we have enough manpower." "There may be a lot of demand and what will also have to be coordinated with the employment and training departments that there are certainly qualified personnel to work."

Ábalos has ruled out that he will encounter problems with the creation of low-emission zones that the Government will encourage in the plan, after the recent Supreme Court ruling on Central Madrid. "It will be grants managed based on attendance and the corresponding administrations will present the project. We are not going to impose anything." In any case, "no one today rationally discusses the need for sustainable models."