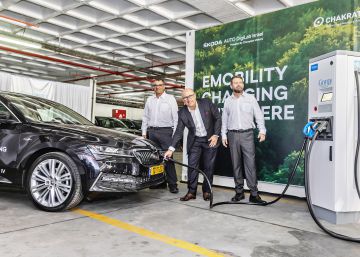 Digitization in the automobile world is an unstoppable process and a fever that no brand escapes. From manufacturing processes to the connected and autonomous car, going through endless services for better and more sustainable mobility, the sector is on the lookout for any idea it can absorb to get ahead of its rivals in any of those fields. Everyone is looking at what is cooked in places like Silicon Valley, Shanghai or Tel Aviv, authentic mecca of innovative startups. And it is precisely in that last city, the Israeli business capital, where Skoda has redoubled its efforts to obtain from the local start-ups the sap it needs to have its own digital development within the Volkswagen group, to which the Czech manufacturer belongs.

But Skoda has an advantage in front of its competitors in Israel: their nationality. The Czech Republic, where the brand originated back in 1895 from two bicycle manufacturers called Václav Klement and Václav Laurin from the city of Mladá Boleslav, is a very special ally for Israel. The Central European country (Czechoslovakia until its partition in 1993) was among the first to recognize the State of Israel in May 1948 and was the one who provided the weapons and military training with which the Zionist militias achieved victory in the first Arab war. Israeli. And although during the Cold War Czechoslovakia behind the iron curtain maintained bad relations with Israel, after the fall of the Soviet Union and the Velvet Revolution the Government of Prague hastened to recover and reinforce the positive image that the Israelis have of the Czechs To the extent that the president of the Central European State, Milos ZemanHe was the first EU head of state to openly advocate the transfer of his country's embassy to Jerusalem.

"Good relations with Israel have been key to the development of the Skoda DigiLab in Tel Aviv," explains Jarmila Plachá, the head of the brand's innovative project. She, along with two collaborators, is the one that tracks the innovative Israeli landscape to find the partners that Skoda needs both for electromobility and for the connectivity of future cars. And already found several. One of the most relevant is Chakratec, a start-up which has developed a kinetic energy storage system that absorbs maximum network loads and allows ultrafast charging stations to operate, even in remote areas. It also allows a virtually unlimited number of high-power charge and discharge cycles and, because it uses a mechanical dynamo instead of chemical batteries, it is greener.

Another example is Guardian Optical Technologies, which develops sensors that work with microwave technology to detect even the smallest vibrations and movements inside the car and process this data in real time. This improves the systems that identify whether the child seat has not been adequately secured or if the seat belt is not properly fastened. It is also worth mentioning Neteera, whose chip located in the back of the driver's seat monitors parameters such as breathing or blood pressure, allowing the driver to detect fatigue and activate an alert on time. Along the same lines, ContinUse Biometrics works on an optical sensor that tracks a variety of physiological metrics to perceive changes in the conditions of competition, health and comfort of the driver.

“We have consistently used the ideas of start-ups to implement our mobility and digitalization strategy. At the same time, our laboratories offer start-ups The ideal environment to develop ideas and projects. We support its implementation with our experience, ”explained Skoda digital director Andre Wehner, in the framework of the Smart Mobility Summit 2019, held in Tel Aviv at the end of October and to which the Czech manufacturer invited a group of European media

Skoda, despite being part of the VW group, believes it is useful for each brand to develop your own digitization strategy, since in different markets there may be different needs for the emblems of the automobile group. Skoda, for example, is much more popular in Israel than any of the other sister brands: VW, Audi or Seat. That is why they have invested in the Citymove app, which marks the fastest and most comfortable route to the selected destination. That same application will shortly integrate the Anagog start-up software, which among other things can be used to predict when parking spaces will be released.

But the most interesting thing that Skoda is holding is the collaboration with the Israeli IT security experts at XM Cyber ​​that is already being used in Skoda's internal computer processes. Cybersecurity is a key link in both connected and autonomous cars. Preventing a hacker from interfering with the car is vital to the success of the most advanced phases of vehicles where the driver's action is less and less. The fact that many Israeli companies have their germ in the Army means that many of the solutions they offer have been developed and tested for the country's own defense against cyber attacks, something that in Israel is taken very seriously considering their situation and history

In the country there are reputable start-ups dedicated to the cybersecurity of cars and airplanes. Argus Cyber ​​Security, owned by German component supplier Continental, is responsible for assessing the cybersecurity risks of the Boeing 787 Dreamliner of the flag carrier El Al. GuardKnox, which works for the Air Force, has patented a system that blocks attacks that alter the functionality of the car. Upstream Security, Karamba Security or Regulus Cyber ​​are also benchmarks in the sector.

Skoda is the best-selling European car brand in Israel and, for years, the fourth in the world strongest in the Hebrew market. The sympathy generated by the firm not only has to do with the historical good relations that Israel has with the Czech Republic, but also because the Central European brand has probably been present in the lives of many of the Jewish immigrants from the former Soviet Union and countries behind the iron curtain that reached Israeli territory from the nineties. It was then that Skoda began exporting its first models, which included the Favorit and Forman, to Israel. To date, the manufacturer has delivered more than 231,700 vehicles in the region. Between January and the end of September 2019, 16,700 cars were sold to customers in Israel. In September alone, 1,100 vehicles were delivered, with a 34.5% increase over the same period last year. The fleet business is the cornerstone of Skoda in Israel. Through its influential local importer, Champion Motors, Skoda won contracts in 2018 to supply vehicles to various ministries, as well as to the army, police and other authorities.

100% online and with 1% deposits to carry customers