One of the firefighters teams working on the Sierra de la Culebra fire, during the extinction work. / EMILIO FRAILE / EUROPA PRESS

The strong gusty winds have not given respite throughout the night and have forced the evacuation of 205 inhabitants of the Zamora towns of Mahíde, Cabañas de Aliste, San Pedro de las Herrerías, Las Torres de Aliste, Pobladura de Aliste and Palazuelo de las Cuevas. to safe places.

The residents, according to the Junta de Castilla y León, have been displaced to the municipalities of Villardeciervos and Alcañices, and have been rehoused in municipal facilities. In addition, the possibility of vacating the town of Boya is being evaluated.

The provisional area affected by the flames is between 5,000 and 7,000 hectares

The changing winds and bad weather conditions transform the 900 hectares burned yesterday into an area of ​​between 5,000 and 7,000 hectares.

According to the information provided by the Civil Guard Command, three roads are closed, two of them provincial and one regional. Specifically, the ZA-P 1407 between Sarracín de Aliste and Ferreras de Arriba, the ZA-V 2638 between Villardeciervos and Ferreras de Arriba and the regional road ZA-912 between kilometer points 6,600 and 22,500 remain closed. The fire of level 2 of danger declared during the night of Wednesday in the Sierra de la Culebra de Zamora and that until Thursday had burned almost a thousand hectares forced the neighbors to evacuate to avoid risk situations.

A new episode of strong winds and dry storms reignited the flames, forcing that decision to be made.

Currently, thirteen environmental agents, seven technicians, eight fire trucks, five bulldozers, eight ground crews, two helicopter crews, a convoy from Salamanca and another from Segovia are operating in the area. Throughout the morning it is expected that convoys from Palencia and Burgos will join. Each of these convoys is made up of two ground crews, two fire engines, an agent and a technician. The performance of eight helicopters and two additional seaplanes is also planned.

More than 220 people have worked throughout the night in the extinction work. The more than 100 professionals of the Infocal operation have been joined by means and troops from the Military Emergency Union (UME), the Ministry for the Ecological Transition and the Demographic Challenge, the community of Madrid and Galicia. The aerial means have been incorporated first thing this morning. 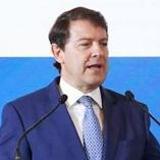 The president of the Junta de Castilla y León, Alfonso Fernández Mañueco, has asserted this Friday through his personal Twitter account that the night in the forest fire in the Sierra de la Culebra has been "hard and eternal" as a result of some weather conditions that "have been and are very unfavorable".

"The protection of people is always a priority," adds the president of the Board, who this Friday will travel to the province of Zamora to go to the advanced command post of the Sierra de la Culebra fire. Mañueco's visit to the command post, located on the outskirts of Sarracín de Aliste, is scheduled for 2:00 p.m.