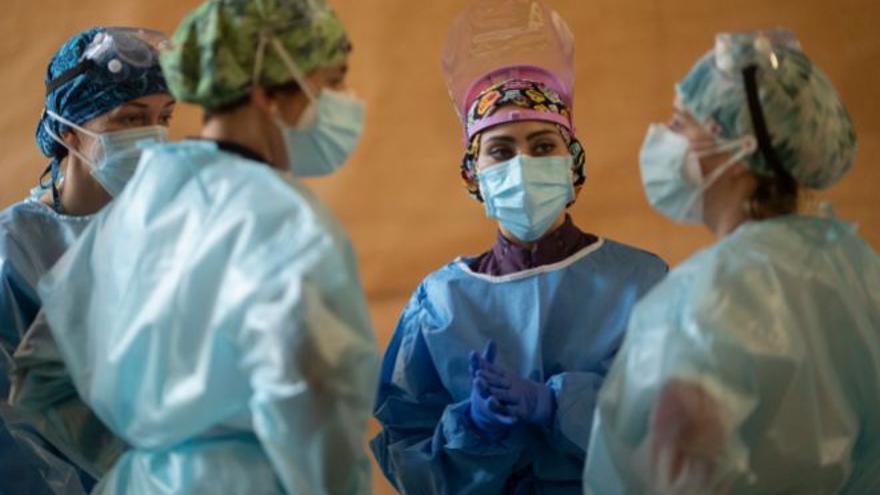 The number of people diagnosed with Covid-19 in the Canary Islands has increased by 176 new cases in the last 24 hours (83 less than in the previous day), period in which they have been added six dead, as reported by the Ministry of Health of the Government of the Canary Islands.

Total Canary Islands It has accumulated 38,145 cases of coronavirus since the first case was registered at the end of January 2020 in La Gomera. Of which, 6,827 are active, 387 are hospitalized, 297 on the ward and 75 are admitted to the ICU.

Five of the six deaths were associated with family outbreaks

Also, in the last hours we must regret the death of six people in the Canary Islands: two women aged 75 and 84 and two men aged 63 and 88 in Gran Canaria; a 57-year-old man in Tenerife, and a 72-year-old woman in Lanzarote. All remained hospitalized, suffered from previous pathologies and had experienced a clinical worsening. What’s more, five of the six deaths were associated with family outbreaks.

If the statistics are analyzed by islands, Gran Canaria It is still the island that adds the most cases in the last 24 hours, reporting 85 more cases this Saturday, with 15,660 accumulated and 3,852 active, and it is the second island with the most cases registered since the start of the pandemic.

Tenerife continues to lead the statistics of total cases, with 16,097 accumulated cases, 2,129 active, accounting since yesterday 43 new infections. Lanzarote adds 18 new cases, with 4,195 accumulated and 589 active; Fuerteventura It has 1,498 accumulated cases with six more than the previous day and 117 active.

La Palma adds six more cases, with 369 accumulated and 34 active; La Gomera adds two new cases, so its accumulated are 209 and its assets, 2. For its part, in El Hierro, the accumulated cases stand at 267 and its assets are 104, when adding to its statistics 1 autochthonous case and 83 cases related to migration.

In the case of El Hierro, these 83 new positives detected in a screening and that go up to the statistics, correspond to the cases related to migration and pending statistical validation. These people, according to the protocol, are following the prescribed isolation, so they do not pose a risk for community transmission of the coronavirus. For this reason, although the data are included in the official statistics, they will not be taken into account when analyzing the parameters that determine the update of the alert levels of each of the islands, so they will not affect a change in level on the alert on the island.

The College of Physicians of Las Palmas vaccinates its members

The Las Palmas Medical College has proceeded to vaccinate the collegiate between February 11 and 12 – first dose – and March 11 and 12 – second dose – who request an appointment online on the institution’s website.

In this way, vaccination at the School, for the moment, is exclusively for private healthcare doctors who do not work in subsidized centers or in the Canary Islands Health Service (SCS), about 800 members in Gran Canaria. Meanwhile, in Lanzarote, the Institution has made arrangements and has communicated to its members the disposal of the vaccine in the center designated by the SCS.

The President of the Medical Association of Las Palmas, Pedro Cabrera, has commented that “once this first goal is met, we will negotiate to continue vaccinating other medical sectors as provided by the health authorities.”

“From the first minute that it was known that the SCS was going to have vaccines against COVID-19 – he continued – the College offered itself as a vaccination point. Due to the successive delays in the deliveries of the pharmaceutical companies the process did not has been able to start so far “. Cabrera pointed out that the objective of this initiative of the College is to reduce the severity and mortality of COVID-19, “especially protecting those groups with greater vulnerability, such as doctors.”

The vaccines are inoculated at the headquarters of the College of Physicians in Gran Canaria by staff of Canary Islands Health Service, following the calendar established by the health authorities.

Likewise, doctors on the islands of Lanzarote and Fuerteventura are vaccinated by the Canary Islands Health Service, who will be in contact with them to give you an appointment directly, thanks to the efforts of the College.