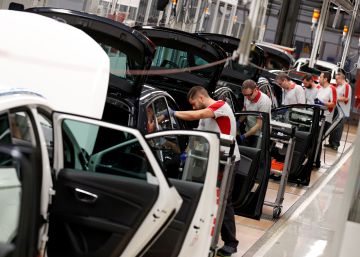 It's been more than half a year since there are no sausage sandwiches in Seat. Not, at least, for workers who have lent themselves to participate, such as guinea pigs, in the MedCars project, to study the health impact of an intervention on life habits. The car company replaced, in a group of employees, lto mortadella and chorizo ​​for wholemeal sandwiches with hummus, sardine or avocado. In six months, cardiovascular risk was reduced.

The anecdote of the chorizo ​​sandwich was the starting point. Change the snack that Seat distributes to its workers each shift for a healthier piscolabis. This is how the study started in April 2018, in which the Hospital Clínic de Barcelona and the IrsiCaixa Research Institute of Barcelona participated. But the intervention went further: physical exercise patterns and intensive emotional accompaniment were also incorporated.

To begin with, the researchers recruited some 300 workers from the factory in the Zona Franca de Barcelona and another 300 from the El Prat factory. All underwent thorough medical examinations at the beginning and at the end of the study. The health intervention was carried out on the Barcelona group, trying to re-educate their habits to make them healthier. About El Prat, nothing more was done than giving the usual health advice from the occupational health team.

Thus, to the employees of the Free Zone, the researchers launched six simultaneous strategies. To increase adherence to the Mediterranean diet, experts prepared healthy seasonal menus and shopping lists, distributed five liters of virgin olive oil per month to each participant and 30 grams of nuts daily, and discount vouchers for healthy products in A supermarket chain. The company also incorporated vending machines with healthier products and accompanied the entire food intervention with behavioral and emotional advice to workers and their families. In addition, the researchers added physical exercise recommendations to employees.

The next step, now, is to study the microbiota – the millions of microbes that populate the intestine – of the workers who participated in the study. “This study has achieved an impact at the metabolic level through the Mediterranean diet, but now we want to see if, in the microbiome, there is an impact of the Mediterranean diet and on what bacteria it impacts,” explained the director of IrsiCaixa, Bonaventura Clotet .

The intervention study with Seat workers in Barcelona has concluded and with it, healthy snacks. The chorizo ​​sandwich has returned, although now employees have healthy alternatives in vending machines. However, those responsible for Seat have assured that they will study with the workers the possibility of implanting the healthy sandwiches to all the workers and banishing -or separating- the sausage sandwich of the company.